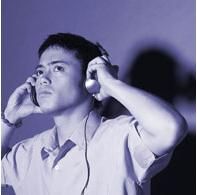 In the early years of your education, being a good listener meant not disrupting the classroom. In video production, it’s all about disruptions – the good ones and the bad ones.

Most people have two functioning ears with reasonable hearing. Further, they can tell the difference between “good sound” and “bad sound,” but rarely can they explain why. Our goal this month is to help you recognize the components of good sound and how to get the best sounding video projects. Armed with this knowledge, you’ll be a better recordist and mixer, building soundtracks that draw the viewer into the project rather than making them suffer through a bad sound experience. So clean out your ears and let’s start listening.

Here’s an exercise to try. Step outside and close your eyes. Listen carefully to the sounds around you and count as many as you can. In preparation for this article, I did this last night and came up with eight distinct sounds. First, there were crickets coming from various directions and distances. Then, there were the louder cicadas and their noisy racket. Next, I heard the waterfall splashing in the flower garden. Next door, the neighbor’s pool pump turned on. In the distance, there were traffic noises from two different roads – each with its own sonic character. Toward the West, a couple of dogs were exchanging pleasantries and, about a mile away, a train began its trek through town. All these sounds were discovered in just a few seconds of critical listening. Learning to isolate individual sounds, their relative volume and direction will give you more perspective when mixing. This is very helpful when creating a sonic environment from various recordings and is especially helpful with surround mixes.

Critical listening is very different from listening for pleasure. Let’s do another exercise. Who is your favorite musical artist? Why? “I like their songs” and “they have a good sound”don’t count. What is it about that particular artist or group that draws your attention? Is it the sound of the vocals or harmonies? Perhaps the lyrical content or the subject of their songs? Maybe they’re highly skilled musicians. It may even be a combination of all these options. Let’s go further: what’s your favorite song? Why? If you’re not sure, take a fresh listen or two. But this time, pick the song apart, paying attention to specific instruments, voices and song structure. Make note of the balance between the various instruments and the vocals. You may even hear something you’ve never noticed before. This art of sound discovery is the first step to a better understanding of mix components. Once you can isolate and evaluate the individual pieces, it’s easier to choose and balance similar elements in your own productions. Musicians seem to come by this skill naturally – the rest of us have to learn it

Maybe you’ve got this whole critical listening thing down, but how does it apply to your video projects? Let’s do another exercise. Round up two or three different microphones – a lapel mic, a handheld and a shotgun for instance – and record the same piece of test dialog with each. Be careful to set every mic at the same distance and try to read the copy identically. Now, listen to the recordings. Each microphone will sound distinctly different. The lapel mic will have a more open, airy sound along with an amount of background noise. The handheld should be more focused and present with minimal background noise. By comparison, your shotgun mic will sound loud and aggressive. These broad examples are based on experience and your test mics may sound different, but it should be easy to tell them apart. In fact, you can actually tell the difference between two similar microphones that are produced from unrelated manufacturers.

Here’s one last bit of ear training. Dig through your CD collection and find a very familiar song – one you’ve listened to many times. Rip that song as a .wav file and then, rip it again as a 128KB MP3. Using your player of choice, play each version, scrutinizing the balance, tone and character of each copy. Listen closely for differences in highs, lows and vocal clarity. The differences should be obvious. While the uncompressed .wav file sounds clean and clear, the MP3 version reveals some odd changes. Bass frequencies are looser and the highs often have a swishy, muted quality. Vocals suffer too, sometimes taking on a mechanical sound. You’re hearing compression artifacts from the MPEG encoding process. Similar problems occur with .wmv and .aac files, but each sounds different. Your NLE may readily accept compressed audio formats for editing but, with your finely tuned ear, you can hear the difference and make an informed decision whether you will use these files or search for a higher quality version.

Don’t forget about the speakers. Big-time recording studios often spend thousands of dollars for their reference monitor speakers. For a studio, these are high resolution audio tools that can reveal the smallest problems in an audio project. We’re not suggesting that you take out a second mortgage to fund some of these beauties, but there are huge differences in audio quality. Maybe you’ve had trouble with some of these tests using the dinky speakers that came with your computer – they’re hardly enough to analyze your project’s sound potential. If you’re in the market for an upgrade, it’s time for a trip to the computer or music store. Most retailers have several media speakers set up for audition; some even have isolation booths. Now that you can spot the differences, it should be easy to find a set that fits your production style, budget and quality requirements.

Give It a Whirl

We’ve discussed several simple experiments that any video producer can try. If you’re new to the audio side of things, this is a great place to start. Even if you’ve done this for a while, it’s always good to go back to basics with some solid ear training. Expand on these examples and see if you can hear differences in sound cards, media players or even different audio codecs. They’re there if you listen closely. With a fresh ear, you’ll pick better equipment, make better mix decisions and create higher quality audio for your projects. That’s because everything sounds different when you listen.

Side Bar: Closer to the Ear

If you edit in the field or the kids are making you crazy, maybe it’s time to invest in a good pair of headphones. Excellent examples can be found for under $100. With the speaker elements right next to your ears, it’s impossible to get away from the sound. This much isolation can also reveal audio problems or prove that you got it right the first time. No more guess-work. The biggest benefit to a good pair of headphones is the ability to take a high-quality listening environment with you everywhere you go.