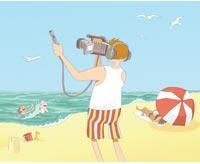 Interesting sounds are all around us. From the clatter of a train crossing to the clamor of an auction, mountains of unique sounds await a featured spot in your next video. Of course, if you didn't mean to record it, the sound is just noise. Sorting the desirable audio from the unwanted is a bit of an art and something many video producers either forget about or simply ignore. In this article, we'll explore the world of natural sound, looking specifically at how it can enhance your production and even save your bacon from time to time.

What is Nat Sot?

Natural sound or "nat sot" is simply the sound of the world. More specifically, for the video producer, it's sound that compliments the images on screen. Unlike sound effects, which are manufactured and dropped in for maximum impact, natural sound simply captures an audio picture of the setting. For example, in a dramatic scene with a couple talking on a park bench, the viewer expects to hear a little of the surroundings; birds, kids playing or perhaps some running water, setting the scene for the upcoming dialog. In an industrial training video it's the sound of machinery and workers going through their paces, anchoring the viewer to the environment. And if you're producing a multi-channel project for DVD, nat sot is perfect for use in the surround channels, filling the room with a taste of what it was like at the location.

SOT is the abbreviation for Sound on Tape, thus NAT SOT is Natural Sound on Tape. If you hire your production services to a director, you'll likely see the term spelled out in the shooting script or a post-production edit list. Nat sot comes in more than one flavor too. "Sot Full" means full volume sound, specifically for clips where the audio scenery is as important as the visuals. You may also see the abbreviation "BG" for background sound. This is the glue that ties the other audio elements together.

Depending on the complexity of the natural sound you want to record, gathering audio may be a simple process. Think of your camcorder as a digital audio recording deck that just happens to capture pictures too. Using the built-in stereo microphone, you can capture some very functional soundscapes — perfect for background audio in your video. Unfortunately, not all built-in microphones are created equal. In fact, some pick up as much mechanical noise from the camera as they do audio. Generally, camcorders with the mike built into a handle or otherwise separate from the body are better suited to capturing natural sound. It's easy to record some test footage to see how your camera fares. Alternatively, you can use external microphones to grab the sound. In fact, some projects simply require audio from the microphone used for dialog during the shoot. Due to the explosion of DVD players and inexpensive home theater systems, the average viewer has higher expectations of audio on video. This means you'll have to use windscreens if shooting outside. Don't forget to record in stereo if at all possible. Nat sot in stereo is a beautiful thing and perfect for filling left, right and surround speakers in more aggressive projects. The February 2005 issue of Videomaker has a more complete discussion of stereo recording techniques.

If the previous options won't suit your production needs, consider using a MiniDisc recorder for your sound gathering. Portable MiniDisc recorders are smaller than most MP3 players and, with the use of an external microphone, capture excellent quality in almost any environment. Their small size allows you to record in more challenging locations, including those where a camera and audio package might be unwelcome. How ever you record natural sound, make sure to get several minutes of audio from each location. This gives you options and allows you to avoid standout sounds that may not go with your production.

It's a Noisy World

As I write this, it's raining outdoors. A quick trip to the front porch reveals a rich palette of sound. First, there is the actual sound of the rain; not a downpour, but a gentle rain falling on leaves, sidewalk and the roof. Next, there is the sound of rain dripping from the gutters and downspouts. In the distance, I hear traffic on wet pavement and a couple of dogs asking their owners if they can come in from the weather. If you're collecting natural sound independent of the video shoot, pay close attention to the character of the individual sounds. If you shot the production footage, you know the environment of the scene and how close the subject was to background noisemakers. Using your ears as a guide, find a recording location that closely matches the original footage. While you're not limited to the exact sounds of the shoot, your choices determine the level of believability. Traffic on concrete pavement sounds different than asphalt. A crowd of people in a mall is distinctly different than a similar crowd at a county fair. Don't expect a bubbling creek to pass for a waterfall. Sure, it's all water, but each has a unique sound. Your viewers won't be so easily fooled.

The key to all this is the word natural. The sound in your video should flow so smoothly and naturally that the viewer won't think twice — they'll believe its all one seamless product rather than a blend of unrelated elements. Of course, it takes some extra work and attention to detail, but a well-shot scene with organic audio will completely draw the viewer into your production. Isn't that what you want? It's only natural.

[Sidebar: Searching for Nat Sot]
If you're still a little fuzzy on how to leverage natural sound in your videos, pop open your favorite search engine and enter the phrase “nat sot” in quotations. You'll get thousands of references, many of them scripts for finished videos with the term in context. Reading through a few of these scripts will help you understand how a video director or editor plans to use nat sot in their finished product. For further clues, watch a few PBS documentaries or magazine programs. During interviews, you'll often hear natural sound from the shoot or accompanying footage.

[Sidebar: Nat Sot to the Rescue]
One of my recent projects required an on-camera narrator recorded in a very noisy environment. During editing, we had to slice some of his commentary into bite-sized chunks with a bit of breathing room between the clips. Visually, it was simple as there was always B-roll video or still images on the screen, but the gaps in his dialog were a little unsettling. Fortunately, I had recorded a couple of minutes of the room sound while we were setting up for the shoot. By capturing this and editing it into little audio band-aids, I was able to keep the sound flowing throughout the video.