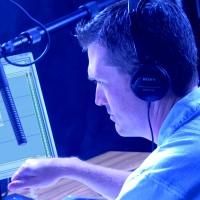 Thudddddd! Every footfall from the mutant space monster shakes the warehouse as he lumbers between packing crates looking for his prey. Cut to the intrepid alien hunter creeping down a damp tunnel. She walks slowly, occasionally stepping through metallic debris or a puddle of water. Suddenly, one misstep causes a loud noise – Ka-ruuunch! – and the monster attacks. Slinging her anti-mutant gun from a pack with a whooosh, she flicks a switch – cha-chink – that charges it up with a rising hummmm, then, with an electric crackle, the monster meets his fate.

None of the sounds in this scene actually occurred while shooting the scene. They were all recorded in a studio, digitally manipulated and carefully synchronized with the action on the screen to create a powerful illusion. All the stepping and crunching and zapping are collectively called Foley – a tribute to Jack Foley, the audio pioneer who brought both real and larger-than-life sound effects to the movies we watch. You may not have realized it, but almost every sound in every major motion picture, from sci-fi to high-drama, is recreated in postproduction. In this month’s Sound Advice, we’ll explore the hardware, software and techniques you need to create your very own Foley effects.

Before you jump headlong into Foley production, let’s discuss the gear required to turn a regular sound into a complex creation. First and foremost, you need a way to record the sounds. In a studio setting, this simply requires a computer, audio editing software, a good microphone and a mixer. In fact, whether you gather your sounds in the studio or the field, you’ll need all these items. The computer part is simple enough: any computer powerful enough for video editing has more than enough juice for audio duty. As in video, fast processors, lots of RAM and big, fast hard drives are essential. For audio, you’ll also need to pay attention to the sound card, mixer and microphone. Many modern computers include a sound card on the motherboard. Some are fine, but most are less than inspiring. If it seems you record more hiss and noise than signal, a sound card upgrade may be on your list. Excellent sound cards are available for around $100 and the added expense is an investment in quality sound for your productions. If you’d rather not open the case of your computer, M-Audio, Creative and others offer external audio devices that require nothing more than an open USB connector (often USB 2.0). These boxes are also perfect for upgrading the sound capabilities of a laptop computer.

Once your computer is up to the task, it’s time to consider your audio editing software. Adobe Audition (formerly known as Cool Edit Pro) and Sony’s Sound Forge are popular Windows options. There are simpler programs that may do what you need on a budget. For example, Ahead’s Nero CD burning software comes with a very capable audio editor. Or check out GoldWave, which retails for around $40. Of course you should give some trial versions a spin before you buy.

A small audio mixer from Behringer, Mackie, Yamaha and others will make a valuable addition to your production. It will allow you to blend multiple sound sources and treat them with volume and tone adjustments before they even enter the computer. Finally, a directional handheld microphone is perfect for picking up Foley sounds. While a shotgun mike will isolate the sound better, they tend to sound a little unnatural. Still, just about anything is better than the mike that probably came with your soundcard.

What if you want or need to gather your sounds away from the comforts of home? The MiniDisc (MD) format offers very good quality recording in a compact package. Digital Audio Tape (DAT) is still available and memory card recorders are quickly becoming a reality. You probably already own a high quality portable digital audio recorder, however: your Mini DV camcorder. Think about it: a fully portable recorder with microphone input and a headphone jack for monitoring, inexpensive tape and the bonus of visually documenting the sound you’re recording for reference. Finally, you don’t even need a sound card to input the audio, since FireWire handles the task easily.

Technically speaking, Foley relates to human noises, such as footsteps, clothes shuffling, coughs, burps and the like. But Foley artists often recreate other sounds too, real and otherwise. For instance, a favorite example is creating the sound of broken bones by cutting a head of cabbage with a large knife or snapping celery stalks. In fact, many of the sounds we hear on movies and television shows aren’t literal at all. And if they are real, they’re highly exaggerated. Think of a slamming car door. The movie version, depending on the car, will be a full-bodied ka-chunk. But listen closely to the sound of your car door today. Better yet, record your car door and listen to the playback. Your version will likely sound thin and anemic rather than the authoritative European closure you’ll hear on screen. Fight scenes, specifically martial arts films, rely heavily on Foley sounds since they’re not actually hitting their opponents, at least not very hard. The sounds you hear come from whacking upholstered chairs with baseball bats, for example.

Foley is famous for replacing footsteps. At first glance, this sounds pretty simple. Point a mike at your feet and walk down the hall, right? Not so fast. In addition to duplicating the pace and pauses of the actor, the Foley artist must recreate the type of shoe, the surface walked on and even the weight of the person walking. A great deal of thought and planning goes into each Hollywood Foley session and, although you won’t likely match their efforts, there are many things you can do to enhance the sound of your video productions. The first step is to listen carefully to the sounds around you and make mental notes as you hear interesting noises.

Creating Foley is exactly like creating video. In pre-production, you analyze the video to find the sounds that need replaced or enhanced, then gather all the goodies you’ll need for the recording. In production, you record the sounds, matching them to the action on the screen. As in video, multiple takes give you options later as you edit. In post-production, you trim the sounds and treat them as needed to get just the right result.

Post is where you can really push your audio editor to the limit. Creating the perfect sound effect often involves blending multiple sounds, altering pitch or duration and tweaking the tonal characteristics of the original sound mix.

For some inspiration, rent Quentin Tarantino’s Kill Bill Volume 1. As with the visuals, the sound effects and Foley are completely over the top. During one fight scene, a group of assassins falls in a heap to the sound of a bowling strike. Pretty funny. I’m not suggesting you layer all your effects that way, but you can create new effects and punctuate others by combining sounds, sometimes from radically different sources.

If this level of sound treatment sounds intimidating, don’t worry. Start simple by creating basic sounds that are easy to synchronize to your video. As you build your skills, advance to more adventurous projects. I can’t promise you’ll be the next Jack Foley, but in time you’ll have the tools to easily zap those nasty mutant space monsters.

The big boys can afford to replace virtually every sound in a movie, so it’s easy for them to toss reality out the window. We’re guessing your productions don’t have that kind of budget. Your task is blending real sound and dialog from the shoot with Foley and sound effects you’ve recorded after the fact. The trick is making it all sound seamlessly real. It starts as you record the sounds. Rather than placing the microphone as close as possible to the sound source, think about how you’d hear the sound in the real world. Something as simple as a telephone ring is always heard from at least arms length, so start by placing your mike there. Too close and it sounds unnatural – too far away and it sounds thin and distant. Experiment until you find the right balance and your replacement sounds will fly by without a hint to their origin.

Ever thought you heard the same sound in different movies? Well, you probably did. Before the digital revolution exploded the number of sound effect libraries available, limited budgets often meant that folks used the same sounds over and over. Here are some fun examples you may recognize: