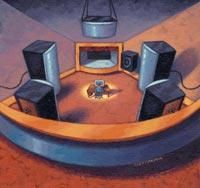 Home theaters abound as their cost goes down and the quality goes up. Even today’s computers have surround sound for total immersion in the media or gaming experience. As our culture becomes more media-savvy, video producers must consider the potential benefits of including surround sound in their productions. Last month, we explored mixing in stereo to provide a sense of space and to further draw our viewers into the video. This month, let’s take it to the next level and investigate how the Dolby Digital experience can be a part of your next production.

Don’t you have to mix surround sound in a studio? No, in fact you may already have everything necessary to do a respectable mix in the comfort of your own home. A sound card that supports surround and six speakers will suffice.

If you already have a home theater, you’ve probably seen the coaxial digital audio inputs on the back of the receiver. Normally, these are used to attach DVD players and transfer the digital audio with a single connection. Many computer sound cards have a digital audio output too. It will likely take some extra cable and an adapter or two, but you can feed digital audio from your computer directly to your home theater receiver. Plant your video-editing computer in the middle of the speakers and you have a simple, almost-free sound stage to mix multi-channel audio.

If you don’t have a home theater or can’t warm up to the idea of dragging your computer in and out of the family room, there are alternatives. One option is to purchase a simple home theater package exclusively for your editing computer. Street prices are often under $400 for complete package, including amplifier, speakers and subwoofer. Another option is a multimedia speaker upgrade such as the Logitech Z-680, also known as the Alesis ProActive 5.1. This powerful system has the advantage of being THX certified and will provide as accurate an image of your video mixes as possible for less than $400.

A surround sound speaker setup consists of three speakers across the front — left, center and right — two speakers behind the listener — the "surrounds" — and a subwoofer to handle all the low frequency thumps, crunches and explosions. There are formulas, angles, and a hundred variables in a proper installation, but the basics are the same: Form a triangle with your listening position and the left and right speakers. The center speaker should anchor your attention to the screen. Place it above the screen and slightly behind the line formed by the left and right speakers. Rear channel speakers often form a shallower triangle with your listening position, with the speakers slightly behind you. The subwoofer only plays the lowest of sounds, and its position is less critical, but know that placement against a wall or in a corner will dramatically affect its volume.

You’ve got your speakers set up and everything works great. Now, what can you do with it? Let’s start with something simple like a live recording of a concert. Thinking from the listener’s perspective, imagine your mixing chair is the middle of the concert hall. The stage is in front of you with musicians spanning its width from left to right. Behind you are many rows of seating along with a balcony. Most of the sound you hear comes from the stage, so the bulk of your audio will focus on the left, center and right speakers. There are many mixing strategies, but simple placement of the items on the stage is a great place to start. The instruments and vocalists on the left side of the stage come from the left speaker, center to center, right to right. That’s easy enough. If there are lead instruments or vocals, it’s common to place those in the center speaker for clarity’s sake. But the action on the stage is only part of the audio content. Beside and behind you are hundreds of people who talk, laugh, whistle and applaud. Send the bulk of these sounds to the rear speakers. The combined effect of these sound sources coming from the same relative direction as they were recorded creates the surround experience. The listener is watching the action on the screen, but they are completely wrapped in sound.

As you’ve guessed by now, the original recording setup is as critical as your mixing in post-production. Each channel must be thought out ahead of time and recorded on its own track — usually with a multi-track audio deck. With movie-style projects, dialog is always placed in the center, with ambient sounds on the left, right and in the rear. Sound effects are placed where appropriate to the action on the screen. And with the addition of the rear channels, you can do fly-bys, drive-overs and send bullets whizzing past your listener’s ears.

From Here to There

Every video editing package is different. Not all support surround mixing and those that do have unique ways to handle Dolby Digital mixing. In all cases, you’ll have multiple tracks on the timeline for the various audio segments, a mixer for volume and an interesting pan control for placement. Instead of just panning left and right, now you can pan left, center, right, left rear, right rear or even assign a track to the subwoofer channel. For some editors, the surround mixing is best done in a dedicated audio program like Adobe’s Audition, but Vegas will allow you to perform a surround mix right on your video timeline. The resulting audio track is either a single, multi-channel WAV file or six individual WAV files — one each for the various audio channels.

Eventually, your masterpiece ends at the DVD authoring stage. The key here is that you need a very special piece of software that encodes a licensed 5.1 Dolby AC3 signal. Many DVD authoring applications encode a stereo Dolby signal, but very few will encode a 5.1 surround signal. The licensing fee for this is quite expensive, so expect to pay for this feature, in addition to the regular cost of the software. Sony’s 5.1 Surround Pack for Vegas will set you back $280. The power to create engulfing soundtracks used to be held exclusively by the movie studios. But today, you can create them yourself, maybe even in your living room.

It’s easy to get caught up in all the cool effects and tweaking your production to perfection. But don’t allow yourself to fall into the trap of thinking everyone will listen to your project in a fully equipped home theater. Many listeners will experience your project on simple stereo TVs or worse. DVD players, by default, collapse your multi-channel mix down to a stereo version when there is no Dolby Digital connection available. This process is called "folding down" a mix. Before you finalize your production, it’s wise to make a test disc and play it back on a basic system to check your mix. If the rear channels are too loud in comparison to the fronts, your video will seem distant. If they are too soft, your viewers won’t get any impact from your carefully crafted special effects.