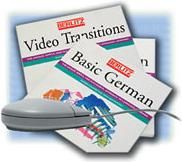 If you’ve ever traveled to a country where the language spoken was foreign to you, you probably got a renewed appreciation for clear communication. Simple concepts like "I’m hungry" or "My car is out of fuel" become much harder to communicate when you don’t know the local language. Yes, given patience and a positive attitude, you can often get quite a bit of communication successfully accomplished even if you’re not armed with the appropriate language – but it’s a lot more difficult than simply being able to use terms that everyone understands. It’s the same thing with the videos that you make.


Starting almost with the dawn of moving pictures, a visual communications "language" has developed that you might not even be aware that you recognize, but you do. Much of this language has been in use so long it’s second nature to us. We experience a cut in a movie or TV show and we subconsciously understand that we’re seeing something else happening now. A cut changes view, but, traditionally, not time. Scenes on the two sides of a cut are generally understood to happen in real time.


But what if you want to transport the audience in time or place? Enter the dissolve or cross-fade. The traditional transition that implies that time has passed between the incoming and outgoing scenes.


Because early film makers took the time to be reasonably consistent with their use of transitional effects, the rest of us benefit from not having to learn a new visual language for each new show we watch. Does that mean that a cut always means the next scene is happening at the same time, or that a dissolve always implies the passage of time? Of course not. Videographers break these rules all the time. And these conventions apply differently to a story-form dramatic work than they do to music videos.


For example, in the classic Bogart film "The Maltese Falcon" when Bogey is slipped a mickey and rendered unconscious — the filmmakers let the audience know that time had passed by using what modern editing programs now call a dip-to-color dissolve. The scene fades to black for a moment, then fades back up to a scene in the same room. By altering the lighting and mood of the second scene, particularly darkening the room and changing the lighting outside the windows to imply night, the audience is immediately aware that Bogey has been unconscious for quite a while. Essentially, they defined in context what they wanted the audience to understand about the transition they applied. You can do the same.

How do you begin to take command of using transitions to help your audience follow the action? The first thing to do is look at the transitions in your editor and think about which of them already have traditional meanings.


The cut and the dissolve carry some traditional meaning, but what about, for example, a top-to-bottom push-slide? What does that transition say to your audience? The basic answer is "nothing." It’s an undefined transition in the language of video. Which is great news, since that means you have the option to define it as whatever you like. You’ve seen videos where a beginning editor uses every transition in the menu between scenes at random. This is the video equivalent of a ransom note. In the search for variety and visual spice, the editor has lost sight of the more important goal – using his or her tools to communicate clearly with the audience. And every single undefined transition in your menu is another chance – if it’s used cleverly – to help you communicate with the viewer.


For example, let’s take our push-slide and give it some context. What if we were making a simple video of a grandfather and grandson playing baseball. We also record a professional baseball game on television and capture and log this footage (this is a home movie and won’t be broadcast). As we assemble our timeline, we arrange the clips so that we pair shots from the game with similar action with our family footage. Now, we select our transition – the push slide – and apply it only to the transitions in and out of our professional game footage.


To make the to and from aspects of the transition even clearer, let’s push from left to right every time we enter a professional scene and reverse the direction – pushing from right to left – as we leave the professional scene and go back to our family footage. What you’ll discover is that no matter how you arrange the other transitions in your video, the audience will quickly come to understand that every time they see a push effect, they are seeing a transition to the pro game. Essentially, we’ve defined for our audience what that transition means. And we’ve highlighted an aspect of our footage that would otherwise be just another set of scenes.


Suddenly, our video has a sub-theme. Maybe we have enough good scenes to make it more than just a sub theme – maybe we decide that a really funny video might be one called "Billy’s Fantasy" or something similar. The point is to see transitions, not as simple eye candy to spice up an otherwise dull series of shots, but as a chance to add a new level of visual communication to the audience.


To make the to and from aspects of the transition even clearer, let’s push from top to bottom every time we enter an eating scene and reverse the direction – pushing from bottom to top – as we leave the eating scene and go back to our regular exploration of the park. What you’ll discover is that no matter how you arrange the other transitions in your video, the audience will quickly come to understand that every time they see a push down effect someone is eating – until they see the push up effect. Essentially, we’ve defined for our audience what that transition means. And we’ve highlighted an aspect of our footage that would otherwise be just another set of scenes.


Suddenly, our video has a sub-theme. Maybe we have enough good scenes to make it more than just a sub theme – maybe we decide that a really funny video might be one called "Wonder World on 10 meals a day" or something similar. The point is to see transitions, not as simple eye candy to spice up an otherwise dull series of shots, but as a chance to add a new level of visual communication to the audience.

To paraphrase Freud, sometimes a cross-dissolve is just a cross-dissolve. Sometimes the transition is justified simply because it looks right in the context of the program. Imagine that you’re making a video about a recent fishing trip. You have lots of shots of streams, brooks and other images of flowing water.


It’s perfectly sensible to use transitions that themselves imply a flow of one scene into the next. So the same cross dissolve that implies time passing in a dramatic story context, can simply be a good aesthetic match for transitioning between images that have their own sense of flow. The lighted Ferris wheel dissolving into the crowds passing at the county fair, a child’s crying face and her mother’s concerned look as she comforts the babe. These and many more are scenes where we may want to linger or even focus our audience on the combination of the two images by way of the slow dissolve rather than the abrupt cut.


In the end, the pre-assigned transitions in your editor’s menus merely start out by offering you their own unique characteristics. You’re free to further manipulate them by making them happen slow or fast, by carefully choosing where the entering and exiting scenes begin and end.


In short, any visual transition in your program can be as strong or appropriate as you can make it. So for your next program, give some serious thought to what, if anything, you want to tell your audience with your transitions. And if you decide to let them help you tell your story, make them count.

What made this approach work is that the "fun" embodied in the transitions matched the tone and content of the program itself. Home Improvement was a comedy. And the transitions were part of the fun.

Most videographers instinctively understand that one important goal of the wedding video practitioner is to help the bridal party look their best in this most important keepsake form of video. Calling up a dripping liquid transition that makes the bridal party look, even momentarily, like refugees from a cheap horror flick, is probably a bad choice. But it is a good example of why using transitions appropriately often marks the difference between a rookie and a pro.