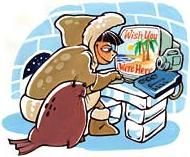 It all started because I wanted to make it snow. In the real world, that’s a pretty tall order. But in the world of video, I didn’t figure it would be that hard. I was right. And I was also wrong. On-screen snowfall is easily found in a lot of stock footage libraries. But making it look like snow is actually falling on a scene in your video is much harder. But I’m getting ahead of myself.


This article is about stock footage – those libraries of clips of anything and (nearly) everything marketed to help you get footage of the stuff that’s not easy or convenient to personally shoot. Stock footage has a long and noble history and it’s grown into a multi-million dollar industry.

Let’s say you’ve been asked by your boss to produce a short video for a sales contest that includes a top prize trip to Hawaii. Sure you can try to convince your boss to actually send you to Hawaii to shoot some footage for the contest – but I suspect your chances of getting an OK to do that would be pretty slim. What you really need is already-shot footage of a Hawaiian sunset that you can use in exchange for some modest compensation. And that’s where stock footage comes in.


Just fire up your Internet search engine and type in "stock video" and "Hawaii" and you will find quite a few sources. The next thing you’ll notice is that there’s a lot of variation in stock libraries. Some are extremely sophisticated, with everything from keyword searches to full-motion low-rez sample clips so that you can see what you’re buying. Some of the libraries even offer online individual clip purchase with the ability to download high-quality versions of the clips directly to your computer.


Other libraries take a different approach, displaying their samples online with written descriptions and static shots, but you’ll need to order the video and have it shipped to you on CD or DVD. The limitation of all stock video collections is, of course, that you have to settle for the shots they have.


If you need, for example, a one-minute shot of sailboats on a lake for the credit roll in your video – you simply keep the camera running until you have the clip length you need. In a typical stock library, you might find plenty of sailboat clips, but none might be longer than 30 seconds. Of course, armed with a suite of zippy editing tools, you can always put your creativity into overdrive and find a way to take the original 30 seconds of footage and stretch it into a minute of content. More creatively, you can duplicate the clip then flip, shrink, colorize, slo-mo, reverse, posterize or texture map your clip again and again until it covers the right amount of time.

You need to be aware of the various licensing plans that you’ll run into. Some stock footage plans take the form of buyout libraries. By purchasing one or more discs in the series, you get the rights to use any or all of the media contained on those discs in your productions. But not all stock footage collections operate on a buyout basis. There are other plans where you must pay an additional fee based on the number of cuts you use, or the length of the clips you use.


I remember auditioning some clips from what I thought was an extremely affordable online stock footage library. The price list proudly announced low rates "starting at just $35!" Imagine my surprise when I got around to reading the fine print and noticed that that $35 fee was the price per second of footage used in my program. The actual bill for that single 20-second shot would have been $700. The lesson is that it’s important to do your homework and carefully read the licensing terms and conditions before you pull out your credit card and go video clip shopping online.

Since the stock footage is rather unchangeable, you are the one that needs to be flexible. When I first started searching for a scene of snowfall in the mountains, I was quickly disappointed because none of the scenes I found were close enough to what I wanted. That’s when I realized I could use the power of my editor to simply make the scene I wanted.


I took a still image of a snowy scene from my location-scouting trip and put it on an overlay track in my software. Next, I used a high-rez motion loop of snow falling that I downloaded from one of the stock video animation services and keyed out the background of my mountain still using a luminance key. After adjusting the transparency of the clips, I was good to go.


Next, since I wanted it to look like the snowfall was taking place outside, I used a graphics program to design a simple window frame. I created the window frame with an alpha channel so that the areas between the frames would be transparent when I brought it into my editor. Next, I dragged and dropped the window frame onto an overlay track over the snowy scene. Then I added some bits of visual spice. I took the original window frame and copied it a few times. On each of the subsequent frames, I used the airbrush tool to add additional snow to the corners of the windows as if the snowfall was piling up over time. Dissolving slowly between these frames during my video added the effect of an accumulating snowfall.


The final trick was to do a luminance transition on the background photo so that the outside scene darkened over time, implying that evening was falling. Voila! A snowy evening, high in the mountains – unfolding outside – all accomplished without a travel budget – thanks to a little stock footage and some compositing magic.

You may never need to make it snow, but hopefully, the techniques outlined here will spark your imagination and help you think of stock footage as more than just buying clips and using them as is. Much of the power of modern editing software is its ability to take a variety of different content types, from your own live-action video, still shots, graphics and even stock footage, and composite them to create a work of visual communication that fully engages the viewer.

[Sidebar: Buyer Beware]
In my search for snow footage for the project I mentioned in this article, I had the misfortune to run across one of the traps that buying stock footage sight unseen can lead to.
My “snowfall stock video” keyword search uncovered up a whole disc of snow footage from a large and well-known multi-national company. Not only was the company well known, but the per-disc price was near the bottom of the range of prices I saw. The description indicated that scenes of “falling snow” were included on the disc.
The Web site for ordering had some static shots of the scenes and, based on those previews, I ordered the disc and, because I was on a relatively tight deadline, paid for overnight shipping. Sure enough, in a couple of days the disc landed on my desk. I popped it in my computer expecting that this particular aspect of my pre-show preparation was done. What I saw was hugely disappointing.
I’d expected professionally shot video. What I got was a paltry few shakey-cam style home video clips. Yeah, it was snowfall video. But the quality of the camerawork was so poor that it was completely unusable for any professional purpose. It literally looked like an amateur videographer had gone on vacation with a camcorder and walked outside and pointed the camcorder around. So as with anything else, the rule with stock footage is to be careful.

[Sidebar: Stock Rights]
The very term “stock footage” implies that there is similarity within the way it’s purchased and used, but that’s far from the truth. Each seller is free to price and license the content as it sees fit.

Some libraries follow the buyout model. In this system, once you’ve purchased individual discs or downloaded selections online, you’re free to use, re-use, edit or alter them as you please.

Other libraries license their footage based on the intended use. A library might offer one price to use a clip in a not-for-profit video, another price for use in a limited audience corporate video and yet another fee if you wish to purchase worldwide rights to use the clip commercially.

The smart purchaser of stock footage always makes sure he understands the precise rights he is paying for, how long those rights last and what the contract specifies as approved uses for the footage.