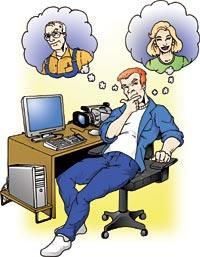 It may surprise you to know that this magazine knows quite a bit about you. No, not you personally. But about the kind of people who read Videomaker. Some of the information is obvious. After all, in a magazine making videos, it’s expected that the readers will have a natural interest in topics related to the field.

We (and all other magazine publishers worth their salt) constantly take reader surveys, to make sure that we keep the needs of our specific target audience in mind. Now, here’s the big question. Do you do the same thing with your videos?

How much time do you spend learning about your audience before you set out to make programs, so that you can keep their needs in the forefront of your mind? This month our topic is editing for a specific audience.

To help illustrate some of these concepts let me introduce you to John Smith, a budding amateur videographer.

John has been toying with the idea of producing his first special interest videotape. His ambitions are modest and he is only expecting to sell a few copies of his first effort to neighbors and friends and earn a little money in order to offset some of the costs of his gear. When he went looking for subjects, he found quite a few under his own roof.

His wife, Amanda is a gourmet chef and she’s constantly getting calls from her circle of friends for advice about meals and wine. Their son, Andy is a typical 16-year-old high-school student and a first class skateboarder. The other kids in the neighborhood are always asking him to show them how to pull off the fancier stunts. And finally, Zeke, his father-in-law, who is an expert at woodworking – turning out exceptionally well-built projects from his fully equipped garage workshop. John expects that any one of these subjects might make an enjoyable first attempt at special-interest video. But which subject to choose?

John realizes that if he’s going to make the project work, he needs to understand more about what these different types of audiences will expect from videos that are targeted to them. So John has decided to sit down to make up a viewer profile of his potential projects.

Taking out a piece of paper he divides it into two columns. In the first, he writes down characteristics he feels will be important for each tape’s particular audience. In the second, he notes techniques or attributes he might want to use in the video in order to appeal to that particular group. For Amanda’s gourmet project – here’s his list.

If Andy’s skateboarding video gets the nod, here’s the list.

TONE: Edgy – This audience wants the tape to reflect excitement. Cool – Make sure the language used in any script is what skateboarders are saying today.

ENERGY LEVEL: Hyper – Use a “no rest” visual style.

DIRECTION: Radical – Keep the camera moving. This audience can take it.

ENERGY LEVEL: Methodical – Break down the process into small steps.

CONTENT: Step-by-step – Cover each technique fully before moving to the next. Comprehensive – Try to show all the details. Safety – Build safety messages throughout the video.

DIRECTION: Quality – This audience will probably pay more per tape – so make sure it’s a quality product.

John knows that the point of the exercise is to understand that the characteristics that make a gourmet instructional video attractive to its audience aren’t necessarily the same attributes that kids will look for in a skateboarding video. By making the lists, he can give some thought on what he’ll have to do in order to succeed with each.

For example, the gourmet video list includes many demonstrations in close-up. With only a single camera to work with, John knows that he’s going to have to shoot many of his scenes twice – once in a medium or wide shot as Amanda explains what she’s doing – and then again for the close shots of the actual cooking as it’s being executed. The target for the video is mostly women in the middle of the age range, so fancy special effects and a hyper-active editing style aren’t appropriate – and would probably only distract from the demonstrations.

On the opposite side of the spectrum is the skateboarding video. If he takes on this project, it’s going to be all about action. He knows that a skateboarding audience will expect fast-paced music, radical camera work and will put up with less than perfectly executed shots as long as the tricks are demonstrated clearly and the video is fun to watch from the very first frame.

The woodworking video is closer in spirit to the gourmet video than the skateboard piece, but there are some important differences when you compare the two lists of attributes.

Where the gourmet tape is folksy in tone, the woodworking tape should be more methodical. By considering this kind of subtle difference in style, you get a chance to think about how you want to approach the shooting.

For example, detailed shots and explanations of the tools required for the job are on the list for the woodworking video, while this is less important in a cooking demonstration. The need for that messaging in one tape, and not in the other is an example of how even similar types of programs have their own particular needs.

Writing a list, then looking at it in the light of the different needs (e.g. casting, equipment, shot coverage, editing style) can give you valuable new perspectives on your production.

Clearly, these are just quick lists; anyone seriously considering the production of any special interest video would be well-advised to give much more thought to the required attributes than are shown on these abbreviated lists. But even these simple lists point out the value of taking the time to understand who your audience will be and what you can put on tape that will help turn them from a one-time purchaser into that most valuable of business commodities: a repeat customer.

So, which of our imaginary videos should John select for the best chance for success?

The answer is: any of them or none of them. Any of these ideas (and thousands more) can either succeed or fail. The difference is typically not the idea behind the video, but the development and execution. The key to success as a videographer is knowing who is likely to watch your tape, and producing the tape specifically for that group. Now that’s a pretty good recipe for sustained success.

Possibly the best way to understand the importance of producing for a specific audience is to imagine a project on a single topic, but for two very different viewers.

Your task is to produce a video on Fire Safety. Your goal is to deliver the message, “Stop, drop and roll.” One version of your tape will play at the local grammar school, the other at a Retirement Village.

Though the subject matter is the same the approach you take in editing should be very different. You might select different music, design different titles and graphics and edit at a different pace. When it comes to making video, the old adage is true, “It’s not what you say, it’s how you say it.”

I was once talking to a fellow videographer about the tape duplication side of the business. He told me he knew a fellow who had built a very prosperous video production business and yet never made more than one copy of any tape he produced. And it was not a duplication master.

“On every project he just sells one tape? You’re kidding, right?”

“His client sells luxury yachts.” He continued, “He goes on board when it’s finished and documents every feature of the new craft, then that videotape is given to the owner on delivery.”

He explained how, with a product that sells for literally millions of dollars, getting an ample production budget for the instructional video wasn’t usually an issue, but the production quality had to be absolutely top notch. Once again, success followed understanding the needs of that particular audience.