It’s natural that the visual part of your presentations will take up the majority of your efforts when you first start flirting with the idea of telling stories with your camcorder. Nevertheless, you’ll quickly learn that if you want to achieve truly powerful communication, you need to balance your visual efforts with equal time and attention to your soundtrack.


Writers and producers build most video scripts around what the audience will see. Shot descriptions, lists of props, lighting gear – all of these important tools insure that what the audience sees makes sense. Still, while getting your visuals right is critical, it’s just as important to decide on how you’ll approach your soundtrack. One basic decision that needs to be made early in the process is whether the pictures will drive the audio or whether the soundtrack will drive the visuals. In this month’s article, we’ll talk about projects where the picture drives the sound.

Bang! What was that sound? A gunshot? You’re sitting at your computer editing your video and you have a decision to make. On your monitor, you see your Femme Fatale holding a gun. The audio track displays a waveform spike of the gunshot. Normally you’d simply make sure that the two production elements stay in perfect sync so that when she fires at her two-timing, blackmailing partner, the sound of the shot syncs up with the muzzle flash and the audience knows exactly what’s up.


But maybe there’s a better way. Instead, before the audience sees the gunshot or even knows there is a gun – you slip that little clip of audio around so that it drives your story in new directions. Maybe lay that gunshot down over the slamming of the car door. Or over her frazzled mother dropping a cookbook. Or over her victim slamming something down on his big oak desk during the argument that leads up to the shooting. Maybe you’ll stick with the audio following the visuals plan, but maybe, just maybe this time, you’ll clip that shot from the track and let the fact that you’ve detached your audio send your video into creative overdrive in order to tell an old-as-time story in a whole different way.

The typical video project starts out with a story idea. A formal script then expands on that story. The script is broken down into scenes. The scenes are shot and then edited together so that the flow of the story makes sense. At this point, the dialog track (or perhaps the voiceover) might be the main audio element driving the video forward, but it is usually attached to (or at least dependent upon) the scenes you covered during principle photography.


What if you have a scene that needs to run longer than the dialog? For example, you’re shooting an instructional tape and in order to show the audience how something works you need to include footage that runs longer than the spoken description provided in your voiceover script.


The common approach is to use background music behind the entire project, keeping the level well below the voice until the description is complete. Then, as the description ends, you’d bring up the music level until the next patch of voiceover, when the music ducks down once again so as not to intrude on the verbal descriptions.

Another common challenge comes when you discover that the visuals you’ve edited together don’t allow enough space for you to properly describe things. When this happens, it’s time to get creative. Applying a slight slow motion effect can often stretch your footage and fix things up. Just make sure the effect doesn’t slow things down so much that your subjects on tape start to look silly.


If something visually appealing happens during the clip, consider finding an eye catching frame in your footage and turning that frame into a still image. The result of cutting a still into moving footage creates the effect that, for a moment, time stands still. This technique will be very noticeable to your viewers, so use it cautiously. Of course having a sensible cutaway shot available is always a comforting option.


Today’s editing software packages all have these capabilities, and more, which means you have many ways to approach the need to stretch your program a bit. This highlights the very strength of a visuals-first approach. The soundtrack supports the visuals. Insert music, nat sound (environmental audio recorded on location) and even sound effects when, and only when, something in the video calls for them.


If you’re satisfied that you have your visual track complete and it tells the story you want to tell music and other sound elements can be easily fit around those elements. Conversely, this isn’t always true when you work on a program that’s driven by its soundtrack.


Starting with the visual content already in the can allows you to edit carefully, removing everything that doesn’t contribute to moving your story along. As a result you’ll typically end up with a very tightly constructed video. This “audio follows the video” style of production is probably so popular because it keeps the program moving, taking little time for any non-critical program elements.

Beware: Sometimes a program that’s too tightly constructed – one that simply pushes from visual subject to visual subject with little or no breathing room between the topics – can be hard to absorb. The wise videographer will know when the audience has had enough and will give them time to pause and reflect on the material. Sometimes this comes in the form of a slower paced scene inserted after a lot of action. Perhaps a musical interlude, a succession of title slides, or some other form of break that can momentarily stop the program flow and let the audience catch up with what’s being presented.


Simply stacking scene upon scene of visuals and then running a music bed under the whole arrangement will result in the video equivalent of a droning lecturer. What makes video interesting is variety, including visual variety, audio variety and variety in overall program mood and pace.


So when you decide to build your video structure with a visuals-first approach, keep in mind that you might need to go back in later and add some breathing room.


The good news, of course, is that in this era of computer editing, you can make the decision to cut, slip, insert and re-structure to your heart’s content, right up to the moment you decide to premiere your masterwork.

Typically, presenting the maximum amount of information in the shortest time possible means that the audio follows the video. Among the types of videos that do well with this kind of approach are: 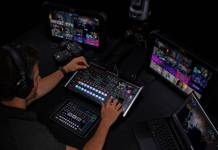