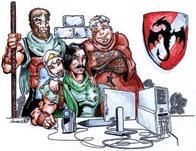 The elders of our craft identified Six Simple Sins long ago as a pox on watchability and clear communication. So, read on, gentle reader, and arm yourself with the techniques necessary to cast out these indecent influences on otherwise good video communications.

2. Knowing neither whether coming nor going


These six common editing sins go by many names and can confuse the forces of good program flow, but fear not. We will reveal the true nature of each of these sins and provide you with an understanding, not only of how to identify them, but how to evermore banish them from your work.

Perhaps the most common editing error, the jump cut – arises from the most noble of motives. In a running scene, something brief takes place that can distract the viewer. Perhaps the subject sneezes, or loses their train of thought (the "um" or "ah" factor). Determined to remove the unwanted or even embarrassing action, you bring out your trusty virtual razor blade and with two deft snips, remove the offending material. Voila: You have banished the evil footage and the problem. But have you? When you slide the timeline break together, you notice that where once was smooth motion and continuity you now witness an abrupt jerk between the position of the subject before the cut and after. This is the dreaded jump cut. In such a situation the brave editor must call forth the cutaway! Shifting the viewers attention briefly to other piece of compatible footage will make the jump cut disappear. But what if you didn’t shoot any B-roll for cutaways? For shame! You’ll have to distract the viewer in another fashion. Perhaps a traditional time-passage transition such as a dissolve, a page peel, or a push slide, will do, just avoid rattling your viewers’ piece of mind by jumping the cut.

Knowing Neither Whether Coming Nor Going

Double (or even triple) negatives aside, this entry in our list of common editing transgressions relates to motion continuity. When video has a consistent sense of flow, it is good. A confused audience is contrary to the will of the editing overlords. The magic sword to help the editor slay the dragon of motion confusion is "the line." To understand the line, think of a stage play. The curtain across the front of the stage defines the line of motion. If a character enters from stage left, and moves right this makes sense. If the unwitting videographer, however, were to position a camera at the back of the stage, the same character would appear to move from right to left, or backwards. When you unknowingly cross the line, actions become reversed – and the audience gets confused. Know ye the line, for it is good.

A break in continuity is said to occur whenever something on screen happens that distracts your noble audience from the flow of a story. Such breaks can be subtle or gross, hard to notice or impossible to overlook.


Long ages ago, I was shooting a corporate video in the winter with a corporate spokesman who was sporting a full beard. Some months later, there was a change in script and we needed to shoot a corrected scene to insert into the program. After a couple of meetings we had an approved script and a shooting schedule and it was only at the final meeting before shooting was to begin that the spokesman was invited to the meeting and we discovered he’d shaved his beard! Ye Gads!


Neither knave nor knight in that company had given thought to the fact that when the insert scenes were added to the program, the result would have been a magical beard that disappeared and re-appeared as if by wizardry. That whould certainly have been a distracting break in continuity. The aware videomaker will spot when breaks in continuity occur. Often these breaks are subtle, but sometimes they’ll be a serious impediment to your audience following the program flow.

One sad and seldom lamented legacy of the nearly bygone era of linear editing is the flash frame. Back in the days of machine-to-machine editing, clean edits required decks locked to the wizard’s incantation of timecode. The mechanical sophistication to park a video deck on an address that lasts a mere 30th of a second is subtle indeed and in those early days, many machines failed at the task. And so it was that a deck would miss an edit by a flickering frame and a flash of white, or black, or snow would result and distract the audience from the holy grail of program flow.


In this era of the magic forces of computers, the same thing can happen if you neglect to slide your clips fully up to their neighbors. So zoom in on thy timeline, tighten up thy edits and beware the unintended flash frame.

Great and glorious as we, the human race, believe ourselves to be, we confuse so easily. A good example is what occurs when we not only listen to people talk, but watch them. In the practice of our editing craft, the great software engineers bestowed upon us separate audio and video tracks. These can be unlinked, and once unlinked, can be slipped and slid with great independence. But woe unto to those who lose lip-sync.


Suddenly, the commanding corporate executive is reduced to being a bit player in a poorly dubbed Godzilla movie. This is an abomination. Thankfully, the same abilities that cause the problem can remedy it. Look and listen with careful ears and eyes. And whenever possible find a sharp sound and matching lip position that can help you return your program to synchronization. This is not always easy, but it must be done. Your audience won’t bless you for your efforts, since they will never notice this edit, but they will curse you if you don’t struggle mightily against this scourge.

Ah, the lure of the chromakey. In the beginning, some video engineer figured out how to turn human beings into weather people and the chromakey was born, and it was good. So good, in fact, that the multitudes demanded access to it. Of course the real high-priests of technology employ chromakey suites with high-dollar cameras, perfectly controlled lighting and teams of technicians to keep their talents’ auras under control. The fact that the software editor has a chromakey function, does not necessarily mean that it’s easy to get good color keying results. Much has been written in other scrolls about the "DV color space," "4:1:1 vs. 4:2:2 color processing" and the other necessities for executing excellent keys. But suffice it to say that if you set out to create a chromakey effect, and after all the tweaking and tuning you can muster, the results still fail to meet your expectations, you need to make some tough decisions.


And sometimes the best editor is the one who understands when not to do something.

Now that you, the merry men and maidens of the Order of the Motivated Edit, are well-informed of these editing offenses, it is time to go forth and spread the word. And the picture. And the sound track. And sally forth with videos far and wide, secure in the knowledge that the multitudes will watch your flickering presentations with the most noble judgment: It is good – show us more!

[Sidebar: Blowing a Royal Raspberry at the Rules!]
The six sins outlined in this article are areas where novice videographers tend to make mistakes. But one must never forget that making video is a creative endeavor. Once you’ve served your apprenticeship, mastered the rules and fully understand why they are typically followed, you’re surely ready to move on to the next level of artistic expression: breaking those same rules.


So while a flash frame is typically something to be shunned, you’ll find a rich banquet of examples in well-crafted videos where the video contains flash frames incorporated as in integral part of the video itself. Likewise, continuity of motion might intentionally be broken for comedic reasons or to show confused action, like someone lost in the woods or in a deep castle dungeon.