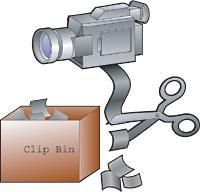 Ripple, roll, slip and slide. No, this isn’t the sequence of events following the consumption of a bottle of fine wine. But unless you become familiar with the different tools available for trimming clips both in and out of your editing timeline, you may feel as though you are as coordinated as a drunk centipede on ice skates.


Yes, we are talking about those funny-looking video clip-trimming icons you probably have been putting off getting to know because you have been able to do a passable job with the more obvious tools. It’s time to look at those labor-saving ways to trim your clips and manage valuable timeline real estate with the use of these common but frequently avoided editing methods and tools.


Since many productions have an off-camera narrator speaking over background music with no critical syncing requirements, we will first concentrate on how to trim your video-only clips prior to importing into the timeline.

There are several benefits of trimming clips before importing them into your timeline. First, it forces you to make decisions based on the merits of that single shot. You won’t be distracted at this stage trying to make it work with the preceding or following shot.


Next, it frees you from worrying about transitions. This is important if you tend to labor over which of more than 300 cheesy wipes to use for transitioning to your next clip. Just watch the big-budget productions. Have you seen a star wipe lately? Finally, you get a cuts-only pre-final version with just a few clicks. This will make managing the clutter that often accumulates in the timeline either non-existent or at least more manageable.


If you’ve played it safe, you have captured several frames to several seconds of video on both the in- and out-points of your source clip. Your particular capture card may allow you to specify pre- and post-roll times that make this task a little easier. Most likely, you haven’t made any transition decisions at this point, so it is important to capture enough to allow a long dissolve if you are so motivated.


Let’s assume that you now have 24 shots, in no particular order, in your project window. (For this example we are not going to put the clips into separate bins, though you probably should.) Select all the clips and drag them all at once into the source trim window.


You now have the 24 clips in your trim window. Select the first clip and play it back to get a sense of timing. Then use the shuttle slider to approximate where you want the clip to begin, then switch to the jog tread slider to fine- tune the in-point. Get used to quickly switching between these two controllers. They are the digital equivalent of the much-loved, and not forgotten, jog/shuttle knob on a tape deck, and will allow you to develop an accurate sense of timing.


If your software supports keyboard shortcuts, use them. One standard configuration is "I" for in and "O" for out. Get in the habit of letting your hand hover over the keyboard. Set your in-point, then shuttle and tread to the exact frame for your out-point. Then select the next clip in the trim window and proceed through all your clips. If you start to feel like an assembly-line worker, well, you should. Whether you’re a Ford or a Chevy kind of person, you would definitely have to admit Henry knew how to make production efficient.


Once you have all your clips trimmed, arrange them in the order you want them to appear in the timeline. By selecting the icon view, some software packages allow you to simply drag clip icons to different locations. Select a snap-to grid if it is available, as things can get messy otherwise. If you are not working from a storyboard or a script, this process can take some time. Some editors actually use this step to develop themes, pacing and sometimes even a rough script. Also, be sure to have imported any still images, still sequences or full-frame graphics you intend to include as part of your final video and arrange them in the order you wish them to appear. You should now have a nice storyboard version of your final video.


Next, select all the clips in order by either shift-clicking on the first and last icons, or some other method your software employs, and drag them all at the same time into your timeline. You should now have all of your clips, stills and full-screen graphics in the order you would like them to appear on your timeline in an economical, cuts-only pre-final form. This is more than a rough cut, and only a little less than a finished cuts-only version of your video.


Now add your narration, background music and any sound effects at this point as you will want to take them into account when trimming clips and adding transitions.

Once Upon a Timeline…

OK, you play back the timeline and you like the order, but the pacing needs some tweaking. Depending on how they work with their neighbors, some clips may now appear too long or short. Now that you have committed to timeline editing, you have several types of new interactive trimming options available to you. They are the rolling, ripple, slip and slide edit tools. These describe trimming techniques, not just tools available on specific editing platforms, though they may be named differently depending on your software.


You first need to consider two things: how do you want to effect your clip and its neighbors, and do you want the overall program length to remain the same? Depending on your software, you may be able to now switch to a separate trim monitor view that allows for more interactive trimming with some of the methods described below.


The ripple edit is the only one that will lengthen or shorten the length of your program. It does this by keeping the original clip’s duration and allowing you to move it left or right on the timeline, automatically trimming the adjacent clips as you go, provided those source clips have frames beyond their in- and out-points. This is particularly helpful if you are trying to match the length of your program with a given piece of background music or narration.


The rolling edit won’t change the length of your video, but it will lengthen or shorten the selected clip and will adjust adjacent clips in the process. A good use for a rolling edit is when your program’s video and audio already match, but you want to change the duration of a given clip.


The slip edit leaves both the program length and the adjacent clips intact. The selected clip’s duration remains the same, only the clip’s in- and out-points shift so you see a different part of the clip.


This is useful if the neighboring clips have critical elements that cannot be further trimmed. Putting a "buffer" shot in-between two such clips and using a slip edit can be a handy trick.


Finally, the slide edit works like the ripple edit, except it leaves the clip and program duration intact by lengthening one neighboring clip while shortening the other. Again, this is good for maintaining alignment with existing audio.


Now that you have carefully adjusted the program pacing by trimming your clips and have a cuts-only version, play it a few times. You may find it works just fine without any transitions. If you do decide to add a tasteful dissolve here or there, at least your timeline is clean.


So trim a little off the top, the sides and the back. But don’t be surprised if your programs end up being shorter than you intended. This is a good thing. Your videos will become stronger, visually and editorially, and your audiences will clamor for more.