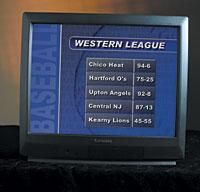 First impressions are everything. This applies to video productions, too, where titles are the first thing the viewer sees. Titles that bleed, blur or smear are difficult to read and that turns viewers off.


Perhaps Kim Davis, broadcast specialist for university communications at the University of Nebraska-Lincoln says it best: "If your viewer has to strain to read the text, the message is lost."


Therefore, it’s all the more important to make sure your titles are clear, legible, and, most of all, make a good first impression. We asked three experts for their advice on the best way to make your titles stand out.

When you choose fonts for titles, plainer is better. Sans serif fonts such as Arial, Helvetica and Swiss are usually easiest to read, says Jeff Bienenfeld, Vice President of Marketing and Communications for Discus Data Solutions Inc., in New York. Bienenfeld said that serifs, or the small lines and flourishes at the ends of letters in the text of this article, can blur on a television, rendering them illegible.


When selecting fonts, watch out for extreme weight changes in characters, or characters that are made up of both thick and thin lines. Avoid fonts with textured edges, says William Lebeda, creative director at The Picture Mill, where he creates titles for movies and television.


"Fonts that have finely textured edges tend to look ratty, rather than textured, at small sizes," he said.


As far as font size goes, Bienenfeld recommends a minimum of 30 point. Even if a smaller type is legible on a computer screen, Bienenfeld points out that television images tend to be much fuzzier from computer screens, and viewed at a greater distance. He says the best way to test whether text on a computer will be readable on a television set is to step back about 10 feet from the computer screen. "If the type is easily readable," he says, "you should be OK on a TV.


Type should also be at least two inches from the edges of the image on your monitor. While computer monitors show the entire image, usually surrounded by a border, television screens mask the full picture, so type can sometimes be cut off if you aren’t careful.

Color: Get the Red Out

Though experts disagree on the best colors for titles, most agree on the worst – red. "Video loves blues and hates reds," Lebeda says. "Red on black is the worst for video, because the red bleeds into the black and looks out of focus.


Bienenfeld says red on blue can be equally troublesome, as the human eye has trouble focusing on both blue and red at the same time. "This creates the illusion that the type is vibrating or pulsing, which makes trying to read it difficult and very tiring."


However, he says red on white usually works, as do other dark colors, such as blue and black. Both Bienenfeld and Davis say yellow and white work well for titles, though Lebeda cautions against bright yellows, stating that they can be "hard to manage." Lebeda says Adobe Photoshop, which he usually uses, has a colors filter that gives an approximate version of how the colors will look on screen.

Though they can help enhance the message you want to send the viewer, too many visual effects can overwhelm your titles and graphics. "A common mistake people make is applying too many effects to their titles," Davis says. "I tell people to keep it simple.


For instance, she says, don’t use drop shadows in any bold colors that will distract the viewer from the titles themselves. The rule in using drop shadows, Davis says, is to keep them soft and subtle.


In fact, Bienenfeld says, drop shadows should help draw attention to lettering. He says shadows are particularly effective when laying type over live action or backgrounds that aren’t uniform in color, because they keep the characters from blending into the background.


As for getting drop shadows to flow in the right direction, it may simply be a question of the right software. Lebeda says After Effects and Photoshop have drop shadow filters that make the process a breeze, as long as you make sure all of your settings match for all of the layers that are using the filters. Then you can cut and paste the effects onto the layers.


Drop shadows are not the only effects that can help – or harm – your work. Gradient colors, outlines and graphics, such as boxes, bars and circles, are among the enhancements that can add zip to your titles. However, like drop shadows, use these elements carefully.


"I try to ask myself ‘Does it help the legibility?’" Lebeda says. "’Am I clearly communicating the message?’ ‘Am I putting type on a circle because I like it or because that is the best solution to the design task?’ Usually, my answers determine my decisions and I will almost always favor legibility and clarity over flash and style.


Davis says boxes, bars and circles all can be effective in graphics, but don’t go overboard. She says she also uses transparencies or gradients underneath text to separate it from a background, but these elements also should be used sparingly and she doesn’t recommend using gradient colors for letters.


"In a nutshell," she says, "you want your graphics to enhance the video, not detract from it.


Titles can help draw the viewer into your video or make them lose interest. The key is to be careful in your choices, and to make sure you are presenting your message both as clearly and as legibly as possible.


After all, sometimes first impressions really are everything.