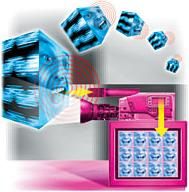 Last month, we discussed an approach to video editing in which the pictures dictate the direction of the edit. This month, we’ll be covering the opposite approach: a style of editing in which the audio determines the direction of the edit.
To beginning editors it may seem that visuals are the determining factor in making edit decisions. The truth is that editing is often a process of matching visuals to essential audio. There are many reasons for this, but chief among them is the simple fact that it’s often easier to cut the visuals to match the sound than vice-versa. Also, it can be argued that sometimes the audio carries the most crucial information in a video segment. For example, when news editors are searching for the best pieces of an interview, they look for the "sound bites" that are the most meaningful. Add to this the profound effects that MTV has had on the pace and style of video editing, and you can see why sound so often drives the video edit.
Before we cover some specific techniques that are useful for cutting the visuals to the sound, let’s start with the point at which the edit truly begins: the visualization stage, where the video project is originally conceived and designed.

Sound as a Visualization Tool

For many types of video projects, including music videos, instructional pieces and narrative storytelling, the best tool for planning how the final result will look and sound is the storyboard. Basically consisting of a series of simple shot-by-shot drawings arranged in chronological order, the storyboard captures the essence of the visual portions of the video. Imagine your completed video as a comic book, with a series of frames indicating how each shot will look on the screen (see page 97 of this issue for an example of a storyboard).
But we’re talking about sound driving pictures, right? So how does one use the audio elements of a video production to determine how the storyboard will look? Two tools will help you in this stage of the production: the script and the music.
For narrative pieces that tell a story, the script will be your best friend when it comes time to build the storyboard. The script not only gives you the settings and characters, it gives you the main piece of the audio, the actors’ lines, which the audience will hear when the video plays. Knowing the audio in advance of the shooting will help you to determine the pacing of your shots, as well as give you ideas for the visuals that will accompany the audio.
Documentaries that rely on voice-over narration can also be pre-planned in this way. There are, of course, a variety of approaches to shooting a documentary; in the cinema verit tradition, the director becomes more involved in staging the subject matter, so this scripting method might be more applicable than a direct cinema approach, in which there is less emphasis on pre-planning and more emphasis on capturing events as they unfold.

Audio Techniques on the Shoot

When it’s time to begin shooting your video, it’s important to remember that the techniques you employ during this shooting phase of the video can be closely wed to the editing techniques you’ll use in post-production.
A common example of this is a method used during the shooting of music videos: play the music that forms the basis of the video while the cameras are rolling. This will allow you to perfectly match the on-screen action (such as dancing, lip-synched vocals, etc.) to the beat of the music. The idea here is not to record the audio as you shoot, but instead to provide a reference for the talent and the directors.
In order to match the timing of your video shoots to the beat of a song, you can use a simple version of clapboard technique used in professional filmmaking (see That’s a Clap sidebar). It requires two cameras, one primarily for audio recording (with a microphone input) and one primarily for video recording. It also requires the use of a CD player with headphone output. Here’s how it works:
1. Set up your audio gear to play your music live on the set. This can be as simple as a CD boom box turned up loud enough for all to hear.
2. Set up your audio camcorder to record directly off the boom box. Run a cable from the headphone output of the boom box to the microphone input of the camcorder; this will require the use of a 40db pad, obtainable at a local electronics supply store for under $20.
3. After you begin rolling both cameras, but before you cue the music and the talent on the set, snap your fingers in front of the lenses of both cameras. This will provide a reference point for use later in editing, allowing you to perfectly match the audio and video from both cameras.
4. Set up both cameras at different angles and focal lengths, then cue the music and the talent.
5. During editing, use the audio recording from the audio camera as your soundtrack, but cut between the two cameras (and other various B-roll shots), using the visual from the snapping fingers to line up with the audible snap on the sound track. On many computer-based editors, you can see the audio snap of the fingers as a waveform on the timeline, allowing you to match the audio down to the frame.

Cutting to the Beat

Another commonly-used technique in both music videos and other music-driven edits is cutting to the beat – matching the edits to the actual beat of a song. This technique can be very difficult with a traditional tape-to-tape editing system, but today’s timeline-based computer editors make it very simple. Most timeline-based systems have a way for you to place markers on the timeline as a clip plays; all you have to do is lay your audio track into the timeline, let it play and press the keyboard command that places markers in time to the beat (see the Mark It in Premiere sidebar).
Like most editing techniques, this method is best used sparingly – seeing every cut made to the beat of a song can be tiresome. It is useful, however, for placing video effects and other editing elements alongside the music.

Like all techniques that video editors use to enhance their productions, techniques for tying the video to the audio require patience and repetition – in other words, like the musicians who created the music you’ll use in your videos, practice makes perfect. As you experiment and play around with the audio in your videos, you’ll come up with your own methods of interleaving the audio and video in your productions.
Remember, in the real world of video editing, there is no clear distinction between audio and video editing – it’s all a part of the whole, and taking an all-encompassing approach is best. Nonetheless, as you discover new techniques for editing audio and/or video, don’t hesitate to tell us about them; our address is located in the Masthead on page four of this issue. Who knows, your ideas may just make it into the Your Tips department in Videomaker Magazine.
Happy editing!