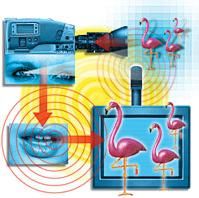 The phrase "video editing" is a kind of misnomer; really, what video editors do is audio/video editing. How often, in the course of your video editing, have you found yourself spending more time on the audio than on the video? It’s a common occurrence in the video-editing realm.

There are two main ways in which video and audio interact, from the video editor’s perspective. There are times when the audio drives the edit, setting the aesthetic direction and pacing a music video, for example, or an interview. At other times, however, the pictures will drive the sound, forcing the music, sound effects, dialogue, narration etc. to take their cues from the visual aspects of the production.

As the title of this article suggests, we’re going to look at the latter of these two approaches to video editing when pictures drive sound. This is probably the most common approach to video editing the approach generally used by documentarians and feature film editors. We’ll be covering some specific practices that you can use the next time you edit some video.

Letting your pictures drive your edit may seem simple and obvious. It is. In fact, this approach to video editing is probably the most intuitive way to go about it.

Note that this approach doesn’t have to and in fact shouldn’t begin with editing. While you’re in the pre-production planning stage of your video, you should certainly keep in mind how you’re going to approach the edit. If, for example, you are beginning with a piece of music of a certain length, and you know you must use the entire piece, you will not be using this approach; instead, you’ll want to shoot the video to fit the sound. (For more on that topic, take a look at next month’s column, When Sound Drives Picture).

Now let’s take a look at a few examples of videos where the images drive the edit.

Suppose you are going shooting a comical scene, which involves one of the most time-honored tricks of the comedy trade – deception:

Character A (Tony) is in the kitchen, preparing to eat a rather large sandwich. As he begins to dig into the hero, he hears the sound of the front door beginning to open.

With a mouthful of sandwich, Tony looks panic-stricken, and begins to dart around the kitchen. Quickly hiding the unfinished portion of the sandwich in a cupboard, he begins chewing in earnest.

Sandi yells, "Did you stick to your diet today, dear?"

Tony mumbles "Mmm-hmmm," as he struggles to chew the sandwich enough for swallowing.

Sandi then begins to relate the details of her busy day as Tony laboriously chews the huge portion.

Just as he swallows, the kitchen door opens and Sandi enters.

There are five main audio elements to this shot: the on-screen audio from Tony, three snippets of dialogue from Sandi, and the sound effect of the front door opening and closing when Sandi arrives.

Like all comedy, this sequence will only work if the timing is perfect. You may think the easiest way to pull off a scene like this would be to mike Sandi’s off-camera audio while you shoot, and capture the whole thing at once. And, in fact, you may wish to proceed in this way in your shoot.

In order to get the timing perfect, however, a little editing may be in order. Because the visual portion is one big shot with no cuts, the audio must be cut to match the video. It’s a simple matter, with today’s computer editing systems to record each of the off-screen audio snippets as separate clips, then place them in the appropriate spot on the timeline for the most comedic effect. Even if you recorded the off-screen audio as you shot the scene, you would still have the option available to cut it into pieces in the editing room and put it together in order to achieve the appropriate comedic effect.

Attempting to shoot a scene like this "in-camera" might require elaborate timing and blocking, and would certainly require an extra microphone and an audio mixer at the very least. By waiting to set up the timing in the edit, you can make your job much easier.

Now let’s suppose you’re shooting a slightly more serious subject: a wildlife documentary of birds that visit your backyard. Though you’re just shooting a simple video with a home camcorder and editing on your home computer, you want the effect to be similar to a full-blown documentary production, complete with voice-over narration and soft music in the background.

Your first task, and by far the most difficult, is to stalk the wildlife in your backyard and get the best shots you can, using your tripod, the camcorder’s zoom lens, plenty of tape and loads of patience. If you happen to have a shotgun microphone at your disposal, you can work on picking up some stunning audio while you shoot.

Once you’ve got enough good shots of backyard birds to work with, you can begin the laborious process of selecting shots to go into your final production. (Logging your shots extensively while you shoot is the best way to simplify this task; that way, you can quickly find those ten minutes of perfect shots within the ten hours of tape you shot.) Once that’s done, arrange your shots, trim them for length, apply visual effects, and then add your audio in this case, narration.

In this example, the length, tone and content of the voice-over narration you add will necessarily be determined by the shots you’ve selected. Would it even be possible to record the audio first and then go out and get the visuals to go with it in this style of documentary shooting? Probably not. Hence, this is a perfect example of when pictures drive sound.

In virtually every instance, sound effects fit firmly into the category under discussion here. Who can imagine editing a visual image to fit a certain sound effect?

Whether it’s a door slamming, a gunshot or the tinkling glass of a broken window, the editing of sound effects often requires more precision than most other kinds of audio editing. Suppose, for example, you’re shooting an action sequence that requires gunshot sound effects. With a timeline-based editing program, this can be as easy as locating the frame you want the effect to begin, then placing the effect in the desired location on the audio timeline. If the effect is even a couple of frames off, the result will look amateurish and even laughable. With this type of audio edit, it’s usually necessary to place the effect, play it back a couple of times, then adjust its location until you get the perfect result.

If you’re using an analog editing system to do the same thing, then you’ll find the job much easier if you have a time-code based system with a jog-shuttle controller for precise frame-accurate edits. Otherwise, you may have to rely on luck and the quickness of your button-pushing fingers to place the edit accurately. It can be done, but it’s very difficult, and will have you longing for a computer-based system in no time.

There are clearly more types of video edits where picture drives the sound, but we’ve covered the most common here: narrative-style sequences where the timing of the visuals with the sounds is crucial; voice-over narration in documentary-style subjects and placement of sound effects.

Obviously, this approach to editing video is not all-or-nothing. In most cases, a video edit will include instances of both picture driving sound and sound driving picture. In our comedic example above, for instance, the very next sequence of shots might be a music video-style montage that follows the beat of a comedic song you get the idea.

That’s it for now; be sure to try out some of these ideas on your own. For a detailed look at the sound-drives-video style of video editing, tune in to next month’s column, which will take a more in-depth look at music videos, montages and other types of edits that rely on sound to set the direction of the video.