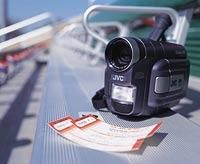 Ballets, ball games, concerts, rodeos, auctions, circuses, lectures, weddings. We all attend spectator events and often we want to shoot them. That’s great, except that our ticket is for row 118, seat 33. And that’s usually where we’re stuck from beginning to end of the whole exciting event.
Why is this a problem? Can you think of any self-respecting movie that was shot entirely from one single setup? When you’re confined to a spectator seat, that’s (almost) your only option. Too often, the resulting video consists mainly of boring long shots enlivened only by clanking jump cuts.
But don’t leave your camcorder at home the next time you attend an event, because as an editor you have a whole bag of cheap tricks, workarounds and sneaky secrets to spruce up the footage you shot from one viewpoint. Of course, these ingenuities depend on having the right footage to work with, so let’s see how you can shoot everything from row 118 and still deliver great footage to the edit suite.

Typically, you want to present just the highlights of an event, cutting the rest and concealing those cuts with smooth edits. (Performances such as concerts are obvious exceptions.)
As you know, making an invisible cut usually means changing the angle enough so that viewers can’t closely compare the action between the two shots. Camera setups are described by vertical angle (like high angle, low angle), horizontal angle (three-quarter shot, profile) and image size (wide shot, closeup). An ideal cut involves changing two out of three elements, typically image size, plus one of the other two.
Stuck in a grandstand seat, you can’t change horizontal or vertical angles; you can only zoom to adjust image size. Fortunately, an edit that changes only the subject size is the most acceptable form of jump cut, especially if the change is dramatic. So when you zoom in, don’t just magnify the image somewhat. Punch in as tight and as much as your lens permits. If you can go from a long shot to a three-quarter shot you’ll probably have enough image change for a good-looking edit.
If you’re lucky (and if your dad-blasted, motorized zoom works fast enough) you’ll be able to edit out the zoom and match the action between the two angles. But if that’s not possible, try to avoid action matching entirely by hiding the edit from the audience.
It works like this: Let’s say you’re taping bronco riders at a rodeo. The explosion out of the gate’s exciting and so is getting thrown (or staying on); but in between it’s just one buck after another. To set up room to cut the repetition:

By letting the action move out of frame, you create an edit point that allows you to cut from the empty screen and then cut back to the conclusion at any point in time you wish. The viewer won’t miss the omitted footage.
Of course, you could also reverse the process, swinging the camera off the action and then allowing the subject to re-enter the frame. However, this is much harder in unrehearsed shooting because you can’t be certain that you’ll be able to frame your subject perfectly when he re-enters the frame.

Cut to the Birds

As always, the editor’s most powerful weapon is the cutaway, defined as any shot that doesn’t include the main action. By distracting the viewer’s attention, a cutaway between shots A and C conceals the fact that C does not match (or maybe even follow) A. You can use cutaways to:

For example, suppose shot A has a truly awesome surge of horse and rider out of the gate and shot C has an equally spectacular fall off a bronco (see Figure 1.) There’s one trifling problem, however, because shots A and C show completely different mounts and riders! By separating A and C with cutaway B, you may be able to hide the fact that the two shots show different things.
The skill lies in getting useful cutaways. Yes, you can get generic footage like balloons rising up above the stands or team pennants flapping in the breeze. The trouble is, they don’t work in every cutaway situation. For instance, in a ball game, this is okay:
A: The umpire calls strike two.
B: Peanut vendor working the bleachers.
C: Pitcher throws the next pitch.
But this is not:
A: The batter connects solidly and heads for first base.
B: Peanut vendor working the bleachers.
C: Batter now standing with one toe on first.
You’re covering the fact that you missed the throw to first. Okay, it happens; but that generic cutaway is so irrelevant to the action that it only puzzles or even irritates the viewer. "Cut to the birds! Cut to the clouds!" is an old Hollywood gag satirizing that kind of desperate cutaway.

Here’s a better version: (see Figure 2.)
A: The batter connects solidly and heads for first base.
B: CU of passionate fan as her expression changes from suspense to triumph.
C: Batter now standing with one toe on first.
And where, pray tell, did this passionate fan suddenly come from? From your handy-dandy library of cutaways that you so carefully recorded at the game. (Or, if you’re a big baseball fan, at several different games. After all, when you’re framing the cheering fan, who can tell which play or even which game she’s applauding?)
The fan represents one great source of cutaways: spectators. Whether you’re at a lecture, a ballet or a stock car race, decide at some point to swing your camcorder away from the action in order to tape the reaction. Get applause, cheers, groans, intent watching, pointing fingers indicating stuff that’s out of frame. Widen to capture the crowd cheering hysterically (or throwing rotten vegetables).
And while you’re at it, get some generic stuff too: hotdogs getting smothered in mustard , smoochers oblivious of the event in front of them, kids looking shiny-eyed (or maybe being pests). You’ll eventually find uses for much of this stuff, and if you don’t, hey there’s always the next game.
Another good source for cutaways is side action. Back at the rodeo, capture the antics of the cowboy clowns. Better yet, tape them as they swing into action to distract a bronco from stomping a downed rider. For one ride, let the contestant go past while you hold on the guys who open and then close the gate.
Finally, look for spectators who aren’t in the stands. At a football or basketball game, the coach is always a natural, pacing up and down, reacting to everything on the field or court, angry, triumphant, agonized. And because many coaches obligingly wear the same topcoat or warmup jacket to every blessed game, build up your repertory of coach cutaways and save them for other contests.

Back to the Event Video Editing…

Even when you lack a cutaway or matchable angles, you can still smooth the transitions between shots. DVEs (Digital Video Effects) can get you out of a lot of tight corners.
When you want to downplay the transition, try a fast dissolve maybe a seven to 15 frame cross fade. Used discreetly, a dissolve can soften a bad cut without calling attention to itself.
At other times, however, attention is exactly what you do want; and that’s where fancy transitions work best. To string together, say, six great punt returns, separate them with flips, fly-ins or three-D transitions (making sure to use the same or at least similar effects throughout the series). Your gaudy digital displays proclaim, "Hey: this isn’t a sequence; it’s an anthology!"
And when DVEs don’t work, you can cheat. Turn shot A into slow motion and let it play out majestically, before a straight cut to shot B at normal speed. The motion effect will form its own punctuation.
And if a dissolve doesn’t work, try a frank still: at the outpoint of shot A, freeze the frame and let it linger a moment before you dissolve to shot B. The result can look very classy.
If all else fails, you can simply change the rules of your program. When you can’t edit footage invisibly no matter how hard you try, then be blatant about it: use obvious mismatches to tell your audience that, again, this is an anthology rather than a single sequence.
One last footnote: In most cases, you’ll want to continue the main audio under the cutaway, to reinforce the illusion that the inserted shot is happening at the same time. However, you want to avoid a jump cut in your audio. The invisible batter sliding into first is more real if the ecstatic fan cutaway is backed by the roar of 10,000 fans. Didn’t record that roar? Well, there are always sound effects, but that’s another topic.