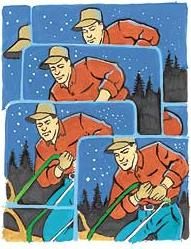 Newbies make videos like photo albums with sound, discarding the bad pix and mounting the good ones in order. When they’ve pasted a shot in their "album" they think it can’t be mounted again elsewhere because they’ve already used that "print."

But a snapshot album is a terrible metaphor for effective video. Your source footage isn’t a record of reality; it’s raw material for creating the appearance of reality. When you add a shot to your edited program, you don’t "use it up" like a drugstore print; you just copy it, leaving the source available for re-use elsewhere.

Why would you want to use a shot more than once? By repeating footage you can fill program holes, adjust timing, create comedy, develop rhythmic patterns, and achieve all kinds of other unique effects.

Normally you don’t want your viewers to realize that they’re seeing the same thing again, so re-using shots takes finesse. We’ll show you some tricks for getting away with it, and, more importantly, some good sneaky reasons to "play it again."

In using raw materials more than once, traditional tape-based editing is just as effective as computer-based nonlinear. In recycling source material, you don’t lose an extra generation because you always copy from the camera source. That way, the tenth appearance of a shot in your edit master is the same generation as the first one.

However, since most linear systems lack time code, it’s important to log and track shots as closely as control track counting allows. Discipline yourself to establish a start point, zero your counter there each time, and roll down to the footage you want.

Digital systems take discipline too. In Adobe Premiere, for example, you can duplicate the same clip as often as you like, but the result is a bin full of clips that look frustratingly similar. It’s a good idea to rename repeat clips, so you can keep things straight. Here as elsewhere, a good editor should combine the soul of an artist with the work habits of a bean counter. And you wonder why great editors are rare.

There are times when you must repeat essentially the same shot – typically because it’s all the material you’ve got. For instance:

1. ESTABLISHING SHOT: Mom and the kids setting up camp near the river at twilight.

3. BACK AT THE CAMP: Junior and Sis huddled at empty fire pit.

MOM: Any minute now, I’m sure.

5. THE CAMP: MOM stares forlornly at cold weenies waiting on their toasting fork.

7. CAMP: MOM sitting there with the kids lying beside her in sleeping bags, zonked.

Because you hadn’t yet thought up this gag when you were shooting, you only got a few seconds of log-sawing; so shots four, six and eight must be repeats of shot two. Can you get away with this triple recycle? Depends on how distinctive the action is. If Dad adjusts his cap during the shot, the gag won’t work because the audience will spot the distinctive repetition. But if he just stands there and saws, there is little in the shot to identify when it’s re-used.

Repetitive action works well, and even better candidates for recycling have no action, or else action that’s indistinct. At the river no two splashes are alike, but hey, who can tell the difference? If you need a second cutaway to make a smooth transition, go ahead and use that same ripple again.

If you’re lucky, you won’t have to recycle the exact same footage. Using the exact same clip would look obvious. Instead, you can retread a later or earlier part of a shot, with some overlap into the section you laid in previously. This makes the recycled moments shorter and harder for the viewer to notice. The trick is to recycle your footage as discreetly as possible. We’ve seen how you can use repeats to add footage; now let’s see how to repeat parts of a shot to revise the action or adjust an actor’s performance.

For an example of changing on-screen action, take that movie cliche, the Grand Staircase from the classic film My Fair Lady.

1. LOW ANGLE WIDE SHOT: Eliza Doolittle descends steps one through eight in her regal entrance to the ballroom.

3. Same as 1: Eliza then descends steps four through twelve.

Steps four through eight are recycled in shot three, and steps eight through tweleve are repeated in shot four, increasing the staircase (and the drama) by one third.

Notice that you need buffer shots between repeat sections. In shot two, the buffer is Eliza’s closeup, and in shot four, it’s a cutaway to Prof. Higgins. (It also helps to stage Eliza’s shots so that the geography of the staircase is visible only in the wide shot. That way, the audience can’t actually see that you’ve jumped your heroine four steps backward.)

In addition to changing screen action, you can also repeat footage to adjust an actor’s performance, especially by playing with pauses. Suppose this brief exchange is covered in a pair of closeups:

2. HELGA: (looks at him skeptically).

3. SAM: This time is different, I promise!

Since Helga simply looks at Sam, that section can be used twice, like this:

2. HELGA: (looks at him skeptically).

3. SAM: This time is different, I promise!

Unless Helga does something distinctive and easily identifiable during that pause, the audience will not notice that you’ve used it twice. You have intensified her feeling of doubtfulness by doubling its apparent length.

If you need to, you can change and even disguise repeat material by changing its speed, direction or image characteristics.

If you are working digitally, you can often make recycled footage look distinctively different by changing its speed. This is a good trick to try when a straight repeat looks just a little too obvious. Of course, 50% shifts will give you obvious slow or fast motion, but you can often adjust speed by as much as 10% without making a shot look unnatural.

A couple of other suggestions: slowing the motion slightly can make it look more natural than speeding it up, and be sure to render the effect and study it for artifacts and jerky movement. Remember that the quality of a digital speed change can vary widely, depending on exactly the amount selected. You’ll need to work by trial and error because every shot works differently.

Another transformation involves flopping the shot by reversing its left-to-right direction. Often this will effectively disguise a background that the audience would remember in its original orientation.

You can also reverse direction for comic effect; and if your performer enters and leaves the screen during the shot, you can butt the repeats together without buffer shots. Imagine that your hero has to make four round trips to some destination. He crosses the screen and exits right, then immediately reappears, crosses left, disappears, reappears, crosses right… and so on. A plain background like an evenly lit wall works best, and the performer shouldn’t carry something in one hand or otherwise have a distinctive "one-sidedness."

You can also disguise a repeat by changing its appearance. The simplest method is by zooming in slightly. The new image size will look quite different from the original. Avoid extreme size changes in order to preserve image quality. And again, render and inspect the effect before deciding to make it permanent.

Another change is color balance. In our beach camping example, the shots of Mom and the kids go from daytime to sunset to dark; so why not rebalance the color in the repeated sawing shot to match. In fact, the funniest gag would be to use audio only on the last repeat, leaving poor hapless Dad sawing away in pitch blackness.

But whether you repeat footage for comedy, drama fine-tuning a performance, or just to get more material, your success will depend on a few simple things: