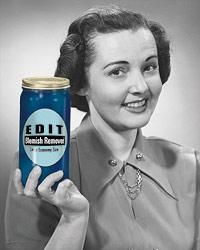 Little things mean a lot, sings the old song, especially when theyre bad little things in your finished videothings you brushed off as too small to bother with when you first caught them. But every time you screen your program, these trivial pimples seem to swell until you squirm like a teen who feels she has "ZIT" lipsticked on her forehead.

So discipline yourself to heal these video blemishes at once. A few patient minutes now will clear your shows complexion and make you a hit at parties.

In assembling visuals, the big temptation is butting shots that dont quite match. The result is whats known as a jump cut. In shot A, he starts to put the cup down; in shot B its already on the table. Youre missing some action. Maybe you do have a shot of the cups descent from the same POV as shot A, only its a slightly wider angle. Good enough to cut together? Sure! No onell notice, honest. You talk yourself into it because you cant lay hands on a better shot B.

Chances are, theres a good alternative somewhere in your raw footage, or theres a cutaway you could use instead. So take the time to find it now or youll hate yourself later.

Another temptation involves shot length. That sunset is so gorgeous with your family silhouetted against it that your audience will really want to study that image, wont they? Not for 30 seconds, they wont, even if youre Ansel Adams; and by the third or fourth screening, even you will wish youd held the shot for maybe a ten-count instead. Remember: no one else is as interested in your show as you are, no one. So make it snappy.

But not too snappy. The opposite fault is the shot thats too short to read ("read" in the media sense of recognize or decipher.) "At first we didnt see the whale spout," you narrate over an extreme long shot of empty sea and sky; and then you cut away before anyone can find that tiny, distant water column.

The moral is that every shot has an ideal duration that you dont always discover on the first try. So take the trouble to screen it and retime it until its the right length.

In sound editing, the place where almost perfect equals lousy is synchronization. To mate the best expression to the best line reading, you laid the Take 2 sound over the Take 1 picture, and theyre close enough, right?

Nope. A sharp-eyed viewer can spot even a single-frame mismatch; and if the sound is maybe three frames off, the result looks like the hilarious screening in Singin in the Rain

Standalone digital switchers and computer editing programs both offer hundreds of fades, dissolves, wipes, flops, squeezes and other transition effects. To save time and effort, its often tempting to stop at each scene shift, think, hmmm: what would look good here? Then lay whatever in.

The result is too many kinds of transitions: a grab bag of effects that tells the audience youre playing with your toys, rather than creating a coherent program. It takes more time to plan and select your transitions in advance and then stick to your visual design. But the results declare youre playing with the grownups.

And within your scheme, make sure you always use a selected transition the same way. If, say, a ripple dissolve starts or ends a flashback, dont use it for a simple scene shift. Youll mislead the audience.

On the technical side, make sure your transitions render correctly. If youre working with a timeline program like Adobe Premiere, double check whether that dissolve is from A to B or B to A. If you spec the effect the wrong way, the result will not render properly.

Oh, and make sure you have enough trim to finish an overlap effect. For example, suppose you decide to change a straight cut from shot 1 to shot 2 to a dissolve. To complete a two-second dissolve, you must extend shot 2 a second back into shot 1 and vice versa. But, if you used the very end of shot 1 in the straight cut version, you dont have enough extra frames to complete the dissolve. The result will be a visible glitch. In this situation, you could fix the problem by moving the dissolve up just slightly, in order to use the shot 1 footage that you do have.

A subtler goof with transitions is length. A four-second vertical wipe has an almost processional majesty, while a half-second version goes by like the Road Runner.

This eight-to-one difference is obvious, but even small adjustments can improve the feel of transitions. So dont make them all the same length. Sense the rhythm of the show and the pace of the sequences youre connecting; then experiment with transition lengths until each one delivers the right emotional tone.

It goes without saying that the wrong music can ruin a sequence, but smaller mistakes can also compromise your music design. The biggest little goof-ups involve endings. Only rank beginners make the mistake of chopping music off cold-turkey, but even a three-second fadeout can sound clunky and amateurish.

To avoid the whole problem, try backing the music in: lay the piece so it ends naturally at the out point and then go back and fade it up at the designated in point.

If that wont work, try burying the ending. For example, if you have a loud, percussive sound effect following the music, you can often chop the selection at the effect point. The loud noise will distract the ear and make the audience forget about the music. As an alternative, try a long cross-fade between music and an ambient track like traffic noise or a restaurant background.

Speaking of cross fades, its much tougher to dissolve between two different pieces of music. The transition sounds obvious and the effect often feels cheap. If you cant separate music cuts with fades (or effects, as noted above) try to make the two selections as different as possible. This avoids the audio version of a jump cut.

You already know about keeping titles simple, with plain type faces and very few of them. Where you may skimp to save time is in previewing your work.

Unless you have a standalone titler, youll probably build your text on a computer. That means an SVGA monitor at least. Its important to note that your titles will look quite different on a TV than they do on your computer monitor. Your computer monitor displays images at a higher resolution than a TV, causing narrow lines that look fine on your PC to jump and jitter when played back on your TV. A TV display also handles color quite differently, so you cant see that your nice clean reds are going to smear like ink in rain.

And before leaving titles, lets talk about content goofs, especially misspellings like "John Smiht." Another common goof is to reverse the credit and the name, as you can see demonstrated in Figure 1.

As you catch these things on a long credit crawl thats supered over a complicated live action montage, you rationalize madly: nobody reads credits; nobody cares. Ah, but John Smiht ahem, Smith cares; and hes the best lighting man youll never get to work for free again.

So bite the bullet: rebuild those credits; relay the composite sequence.

Saving the last for last, make sure your program renders cleanly, without mosaics, confetti or dropped frames. If your system needs to batch render the final version of a long program, you might have to wait hours for the final result.