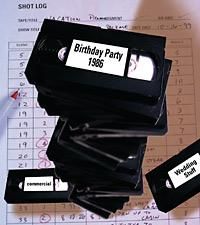 At some point during the hours of wedding footage, the bride glances at the groom for just one brief moment with a soft, loving look that tells the whole story in one priceless image. It is the essential shot for the wedding video you’re editing.

But where is it? You’ve rolled back and forth for hours through those miles of wedding tapes and you still can’t find that vershluggener shot. To be blunt, you can’t find it because you didn’t take the time and trouble to log your footage before you began assembling the video. Been there? Good. Now you’ll pay attention as we show you how to organize and catalogue video and audio materials so that you’ll never lose that shot again. And don’t worry, it’s painless and extremely helpful.

It Starts in the Camera

Step one is to set up your camera tapes. Each tape should get a full label identification, including a roll number, in advance. Give each tape a name, date and number (Little League 11/12/99, #1) before you record on it. It’s all too easy to say, "I’ll do it later" in the midst of a hasty tape change and then forget to do so.

If you’re producing a video that requires a large number of shots, you’ll want to slate each take. Slates are commonly used in television and film production to identify each of the thousands of takes that are shot on film. Early producers identified shots for editors by writing visual cues on little chalk boards (made of slate) and holding them in front of the camera. Slates can be valuable to you as a video producer as well. Each and every shot you take should be slated with four pieces if ID:

In this system, you would slate the third attempt to record the second camera shot in the sixth scene as "6B3."

This is especially useful in nonlinear editing, when you are fighting to restrain file sizes by digitizing only the takes you plan to use.

How finicky should you be about slating? Here’s a good compromise between negligence and compulsiveness:

Black between takes is especially important to nonlinear editing software that finds and logs shots automatically. Without black between them, two takes that begin and end similarly will often be logged as just one.

When you get home, you may want to convert your shot log into a computer-based shot database that can be searched and sorted. Most nonlinear editing software includes database management functions and if you’re doing traditional linear editing, you can easily design a database from scratch.

First, make a separate field for each part of the take ID: roll, scene, shot and take. That way, you can sort and display takes by any of those criteria.

Next, create fields for the take’s in point (start) and out point (end). These will be expressed either as time code or as elapsed hours/minutes/seconds, depending on your equipment. To find a shot on a tape, you only need the in point. The out point field is included so you can calculate the length of a take by subtracting the in point from the out point.

Camera angle is an essential field, to remind you whether the shot is a closeup, an insert or a long shot, for example. Next comes content, a text field in which you describe what happens in the shot. In shots with multiple takes, you may use this field only for the first one, unless there are major differences between takes.

A comment field is invaluable for unclassifiable notes, like "She says hi instead of hello in this take only." I also use a rating field, entering "N," "M" or "Y." N (no) means the take is unusable for some reason, M (maybe) means it’s all right and Y (yes) is the equivalent of a circled take.

Is all this really worth it? For a project that will run ten to 15 minutes or longer, you’ll have too many shots to keep in your head (unless they’re immensely long and boring shots), so building a database can save you time and stress.


If you’re doing traditional linear editing, there might be a greater chance that you’re working with the tape counter on your camcorder or VCR. You already know that this elapsed time system has two big problems:

So the first step in linear shot logging is to establish a zero point: a single frame where you can null the VCR counter so that every subsequent shot starts at (nearly) the same time count.

An easy way to do this is by laying color bars or a solid color down at the head of each source tape (Use the video insert function if you have previously recorded black there.) With slo-mo and single framing, find the last frame of color, pause the tape and null the counter.

Then start logging your shots by noting the hour/minute/second reading at each in or out point. Every time you insert the tape into the VCR, find that last color frame and null the counter. That way your shots will always read out (nearly) the same numbers.

With your identification numbering established, start logging your shots by filling the fields in your database. When you’ve finished, you can sort by:

You can even use a database filter to display only takes with an X (or whatever) in the circled take field.

If you’re digitizing your raw shots to a hard drive and working in nonlinear mode, the database part is easy. What’s harder is selecting shots and then filing them.

To conserve precious hard drive space, the circled take system is a must, so you can digitize only the shots you plan to use. For each shot, set in and out points to allow plenty of leeway for trimming and matching action.

Nonlinear software for digital formats includes batch capture features: go through an entire tape at once, specifying in and out points, then instruct the software to slave the camcorder or source deck and digitize the selected material automatically.

If you have a large hard drive that’s not partitioned, just skip this part, but if you have any kind of partitions in place, be sure to save your digitized shots in a place where you will not have to move them later. Because editing software must go back to original material more than once, it gets confused and downright testy if shots are not on the drive or in the directory where it expects to find them.

There are two schools of thought on file names. One believes in long, descriptive file names, and the other sticks to the old DOS-based eight-character names. In most cases, it’s okay to use the longer file names, but if you have and intend to use old software on your computer, or if (heaven forbid) you find that you sometimes perform file operations in DOS mode, consider sticking to the eight-character limit. If you use slates for file names, they’ll always fit. For example, scene 119, shot D, take 23 would slate as 119D23. Add two places for the roll number and you get 119D2303.

Why place the roll number last? Because this isn’t a database, but a file system. In locating shots on your hard drive, you’ll almost always want to sort them in Windows Explorer by scene.

A last tip: avoid file names that are difficult to interpret. "Lilcupcu" may hold deep meaning when you assign it, but when you’re hunting for it a week later, it’ll be gibberish.