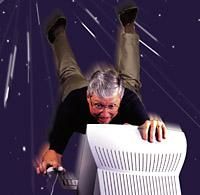 Here on the Edit Suite home page, we’ve looked at a myriad of strategies for adjusting program pace, for cutting out the dull parts and for using the power of suggestion to sell things that aren’t really there.

These strategies are intended to control space and time and otherwise alter the video continuum to effectively tell a story. Let’s back up a step for a moment and try to summarize what it is, exactly, that editors do when they manage video space and time.

But First, the Fine Print

As you may have experienced or read in these pages before, good editing is really a seamless continuation of directing. A savvy director anticipates the cutting process by supplying the right raw materials. The editor then implements the director’s vision by using those materials to craft a program. An important stage for the manipulation of space and time occurs during the shoot; and to understand how that happens, you’ll need to visit the set occasionally.

For clarity purposes it’s easier to discuss space and time separately; but they’re really mixed up together. As an example, suppose an office location is so large that it takes the boss 20 steps to walk from the door to her desk. To deep-six the uneventful 20 steps it takes to reach the desk, the director chooses to shoot two reverse angles, instead. The first shot is of the boss coming through the door from the desk point of view. The other one is of the boss arriving at the desk from the door point of view. Then the editor cuts the door shot after the boss has taken three steps and starts the desk shot when she is just three steps away.

Okay, so which one has been eliminated? The time required to take those 14 middle steps, or the space crossed by those 14 steps?

The answer is either or both. In Figure 1, the two shots are composed and edited to shorten time, while the huge space of the office remains visible to the viewer. (In Figures 1 and 2, the left column indicates the first shot of the scene and the right column shows the last.) In Figure 2, the editor compresses space as aggressively as time. Since the viewer never sees the whole office, its vastness is contracted to just the areas of the door and the desk.

To see this law in action, look at Figure 3. Here we have a large room with an archway in one corner. But our story requires that archway to be at the end of a long, narrow corridor, instead of an open room.

The solution: add the opposite "wall" of the "corridor" by propping up a single 4-by-8 slab of sheet rock, and painting it to match, more-or-less. You establish the hallway by having the actor walk along the room wall; then shoot the archway with the end of the opposite "wall" that you constructed in the frame.

Instead, since the false wall continues past the frame edge, the audience accepts the illusion that it just keeps on being a wall. To put it another way, if part of it’s in the frame, then the rest of it must continue outside the frame.

Where does editing fit? In the choice of a cut point between the two shots. Since the sheet rock is only four feet wide, the camera must be close enough to include only the end of the "corridor." To keep the sense of space, the editor holds the first shot for half a second after the actor has exited. This extra moment helps sell the apparent length of the corridor. (Once again, we can’t consider space without including time in the discussion.)

The editor is even more deeply involved when the task is to place two widely separated sets or locations right next to each other. The classic application is the two sides of a door, in which the outside is a door at an exterior location, while the inside is a matching door on an interior location or set.

The performer makes a complete exit and a complete entrance, at a totally different location. To stitch the two places together, the editor lets the door swing open to a certain angle before cutting; then starts the door at exactly the same angle. The result is what looks like one continuous arc.

You can also use editing to synthesize a single location out of separate parts taped at two or more different places. To continue our story, as the woman comes back out the door onto the urban street (Figure 4a), she spots a young man shooting baskets in a schoolyard across the way (Figure 4b). She calls to him, in closeup (Figure 4c) and he answers her in closeup (4d).

But the basketball court is not on the other side of the street; it’s actually in a school yard several miles away (4c). The difference between the two settings has been concealed by framing off some of the features behind the basketball court (if it’s not in the frame, it doesn’t exist). The two places have been combined into one, by inter-cutting them. (Notice how the pair of closeups strengthens the idea that the two people are in the same place.)

Finally, to complete the illusion, the woman walks "across the street" to join her friend (Figures 4e and 4f). As with the doorway, the editor sells the trick by cutting the two shots to match her walking action.


This example shows how tricky video time can be. Note that the edit between 4e and 4f appears to shorten the time it takes to cross the wide city street by cutting the dull part in the middle.

But whoa! You can’t cut the middle out of that cross because the performer never really crossed the street. The actual time cut isn’t just a few moments of street crossing, but the hours or days between shooting sessions at the two different locations.

We’ve also shown how shortening and lengthening the time between lines of dialogue can alter their meanings. So let’s jump to another group of editing devices that also control time: transitions between sequences, namely wipes, dissolves and fades.

Most people already know that a dissolve signals a time lapse and a fade starts or ends a program. But there’s a lot more to transitions than that. For instance, note that a digital visual effect (DVE) like a flip, fly-in or 3D effect does not communicate anything about time or space. All a DVE can say is, "what you’ll see next is different from what you’re seeing now." For this reason, it’s wise to avoid DVEs when you’re trying to underscore the passage of time.

Wipes –at least the simple kind that move horizontally across the screen– do signal time passage; and to most viewers they’re as unobtrusive as dissolves. Although they have been out of fashion for many years, with the increased popularity of nonlinear editing, wipes are regaining popularity because they are as easy to create on video as dissolves.

Still, the classic dissolve is the transition of choice for showing the passage of time (and often space as well). It’s simple and nearly invisible; and because it can hold viewer interest for many seconds, it’s extremely flexible.

And don’t forget its partner, the ripple dissolve, which is a handy tool that signals a dream, fantasy, time jump into the past or someone’s memory of the past.

In starting and ending programs, extended fade-ins and fade-outs are too obvious to linger over. But combined fades that descend to black and then come up at once on a new scene are more subtle. These quick in/out fades signal a major jump in time. How major? That’s the subtle part. It’s a matter of editorial judgement and largely determined by the content of the footage on either side of the fade. It may help to think in theatrical terms: think of dissolves like they are scene breaks in a play, while fade-outs and fade-ins are more akin to the breaks between acts.

Finally, if you need to signal a really, really, really long jump in time, you can add a title page or experiment with leaving one to five seconds of black on the screen between the two halves of the effect. This trick is especially effective if you start the audio of the incoming scene before fading up its picture. But that’s a topic for another time.