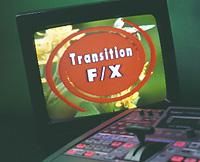 Hardly anyone needs to be introduced to video transitions like cuts and fades. Even the dampest newbie instinctively recognizes them from years of watching TV.

Still, the use of such elements needs a closer look. Transitions are key components in the language of video communication –a visual language that’s as sophisticated, in its way, as verbal speech. While the beginner speaks video at the "Me Tarzan; you Jane" level, the skilled practitioner communicates more eloquently and precisely.

We’ll begin with a quick review of the basics and then move on to using transitions correctly and deploying them with style and above all, restraint.

The classic transitions are, of course, the fade, the cut and the dissolve.

A fade is a gradual transition between an image and black (or sometimes white or another color). "Fade in" brightens from black to picture; "fade out" goes from picture to black.

A dissolve is a gradual transition in which the outgoing shot fades out at exactly the same rate, frame-for-frame, as the incoming shot fades in. This perfect overlap is essential because it maintains full screen brightness throughout the transition.

To keep the math simple, imagine a short, 10-frame dissolve. In the first frame, shot A has faded down to 90% brightness, while shot B has faded up to 10%. At mid point, the split is 50/50, and by frame nine, it’s 10/90; but in every frame, the combined brightness of shots A and B equals 100%. Because the image never dims, shot A appears to literally dissolve into shot B. (Dissolves are also called cross fades and mixes.)

To complete the classical catalogue, we should add the hairy, knuckle-dragging ancestors of today’s Digital Video Effects (DVEs): irises, wipes, ripple dissolves and blackboard flips. Hollywood used these simple old-school optical effects for short subjects, training films, musical numbers and other special purposes. In those days, effects were created expensively on optical printers in film labs. Even earlier in the silent film era, the effects were laboriously built into the camera and recorded as part of the original footage.


As the grammar of film developed in Hollywood and elsewhere around the world, the classical transitions began to represent specific meanings.

People have often tried to define cuts, fades and dissolves by analogy to punctuations in other media. In the theatrical comparison, for example, a dissolve is like a scene break, while a fade is similar to a division between acts. Unfortunately, the theater has no true analogue for the straight cut.

A comparison to the printed page works better –at first. The cut is like the period at the end of a sentence, the dissolve begins a new paragraph and a fade starts a whole new chapter or section. That’s pretty close.

Fact is, it’s better to forget about plays and books and define movie transitions in terms of their own medium. In this system, a cut is a transition that’s invisible. In the hands of a skilled editor, you might call it a difference without a distinction.

A dissolve usually signals a change of time, place or both, within a single larger action. Suppose John and Marsha are in their respective apartments, getting ready for a heavy date. In a classic movie, dissolves might be used like this:

John in his shower.

Marsha in her shower.

John getting out of his shower.

These dissolves signal changes of place, implying that the two actions are unfolding at the same time. But now suppose that we stick with John for a while:

John getting out of his shower.

John splashing after shave at his sink.

John all dressed, tying his tie.

These dissolves signal changes in time, but not place.

Then, continuing with John, we

John hailing a cab on the street.

John emerging from a flower shop with a bouquet.

And now the dissolves signal changes in both time and place at once.

As for the fade, usually a classic movie started with a fade in and ended with a fade out. In between, you might see them used like this:

MARSHA: "I’m sorry, John, but you’ll never be a success at anything." She slams the door in his face.

JOHN (fist raised toward heaven) As Scrooge is my witness, I’ll never be poor again!

A Rolls Royce pulls up to the curb and the chauffeur hops out to open the passenger door. John emerges, dressed like the millionaire he has become.


This is most common function of the fade out/fade in combination: to signal a major change in time and place, along with a major new section of the story.

The Lore of the AVE


Let’s call them "Analog Video Effects," the old fashioned transitions made on an optical printer. The most common effects were the wipe, the ripple dissolve and the flip, and each had a special meaning.

The wipe did just about the same job as the dissolve, except that it called attention to itself, to make the transition more obvious. In this way, it combined the emphasis of the fade out/fade in with the speed of the dissolve.

In a ripple dissolve the merging scenes also waver and wobble like reflections in moving water. A ripple dissolve always indicated a flashback: a transition to something that happened earlier.

JOHN (to his chauffeur, still holding the door of the Rolls open) Little did I know when I first met Marsha…

John, emerging from the flower shop with a bouquet. JOHN (continuing, voice-over:) …how her scorn would spark my ambition to succeed.

The flip is a specialized wipe that simulates the effect of spinning a free-standing blackboard to display its back side. This often conveyed a sense of "on the other hand," or, "meanwhile, back at Marsha’s place." Because they called attention to themselves, flips were often used in comedies and non-fiction short subjects.

Fades were the earliest movie transitions because the camera operators could make them right in the camera by gradually closing or opening the lens iris or the shutter.

But then they invented the iris fade, in which the picture frame turns into a circle, which gradually shrinks to a small diameter, then dwindles to nothing, leaving a black screen. (The reverse or "iris-in" technique was also used.) The trick was that the circle did not contract toward the center of the frame, but toward a significant detail anywhere in the picture, a detail like the hand and gun of the bad guy.

The Curse of the DVE


As you can see, classic transitions took skill, and above all, work (not to mention time and money). Then came digital video effects that almost anyone could afford and insert with the push of a button. Before you knew it, new scenes were flipping, flying, spinning, bouncing and pasting themselves onto cubes and spheres.

It was a disaster.

Why? A very wise man once observed that when your newest tool is a hammer, every job starts to look like a nail –whether it is or not. Folks who didn’t know a dissolve from a doorstop started throwing in any old effect, just to make programs look zippy. As a result, transitions began to lose their assigned meanings and the grammar of video suffered accordingly.

Thankfully fads are, by definition, temporary, and now as the novelty wares off, cooler heads are starting to prevail. As DVEs evolve from "oh, wow!" to "yeah, right," we’re returning to simple cuts, fades and dissolves because they’re effective and unobtrusive and they don’t interfere with the main purpose of telling a story.

That doesn’t mean you can’t use the latest rooten-tooten, rip-snorting, sock-dollar DVE in your kit. But save it for those special places where it’ll give a scene unexpected meaning and knock the viewer’s socks off.

Otherwise, favor the classic transitions. They really do the job better, and they help to make your video a class act.