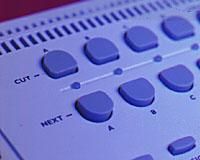 Despite a professional editor’s tool kit of fades and flips and wipes and fly-ins, 99% of all shot transitions are plain old cuts. An editor uses cuts to decide which information is presented to the audience and to control the impact of the material on the viewer. We’ll look at each of these functions and then wrap up with a bag of tricks for making scene transitions with cuts only, as an alternative to all those fades, flips, and fly-ins.

But first, the usual disclaimer: since cutting depends on having something to cut, the process really begins with directing; so we’ll have to sneak out of the edit suite occasionally to spy on the action on the production floor.

Cutting to a different shot is the quickest way to deliver new information to the viewer. Cutting to:

Why not move or zoom the camera instead–out, in, or around–within one continuous shot?

Because camera shifts that have no purpose besides presenting new material eat up screen time without contributing to the program, and that makes them a waste of time.

The Power to Choose

Cutting allows the video editor to choose which audio/visual information to present to the viewer. After all, a savvy director captures multiple takes of each shot, overlaps some action from setup to setup, and often records all of that action multiple times from different angles, giving the editor plenty to choose from.

To synthesize a single presentation from this abundance, the editor selects one piece here and another piece there and pastes them together with cuts. As already noted, the editor uses this method to present the information needed at the moment. After picking the best angle, editors select the best take and then select the point in the action that starts where the previous shot left off.

Good cutters refine their choices still further by selecting pieces within individual takes. Suppose that in take 1 the actor fluffs his line at the start of the shot. In take 2 the actor gets the line right but the camera wobbles at the end of its move. By cutting briefly to another shot in the middle of the action, the editor can start with the first half of take 2 and end with the second half of take 1, and the audience never knows that the takes have been switched in midstream.

Editors use similar cuts to lose the dull stuff. Suppose that to enter the ballroom, Cinderella has to schlepp down a flight of fifty stairs. Boring! Here’s how you could snap it up to make it more interesting:

CLOSEUP, REVERSE: The Prince’s jaw drops at this vision of loveliness.

PROFILE ANGLE, MEDIUM SHOT: She continues down two more steps in the middle of the staircase.

FRONT ANGLE, WIDE SHOT, AS BEFORE: In two final steps, she reaches the ballroom floor.


By cutting among three camera angles, you can reduce fifty tedious steps to just six.

But suppose you have the opposite problem: you want a big, dramatic entrance for Cinderella, but the staircase on your cheap set has only ten steps. To solve the problem and enhance the drama, you use cuts to re-time the entrance, like this:

PROFILE ANGLE, MEDIUM SHOT: She repeats steps three through six and continues through step nine. The audience can’t see the steps that she’s repeating and the completely different background in this profile angle prevents them from comparing her spatial positions in the two shots.

FRONT ANGLE, WIDE SHOT, AS BEFORE: she repeats steps four through nine and negotiates step ten to reach the dance floor.

By this stratagem, you’ve expanded 10 steps to 20 and stretched Cinderella’s entrance dramatically. (To see this at work, study Audrey Hepburn’s entrance to the ballroom in My Fair Lady.)

In this example, timing is used to set the length of an action; but you can also time cuts to control the rhythm and overall pace of the shots themselves. For instance, you could increase the energy and tension of Cinderella’s entrance by replacing the Prince’s single reaction shot with several quick glimpses of other courtiers:

CLOSEUP: The Chamberlain has a puzzled look.

By replacing the prince’s long single closeup with four short ones in the same time period, you completely change the pace of the sequence.

Now add one last cutting element: rhythm. The closeups are brief, right? So if you keep Cinderella’s shots long and steady, you create a —- . . . . —- rhythm that contrasts her serene self-composure with everyone else’s excitement.

Controlling pace and rhythm is perhaps a cutter’s subtlest contribution to a show and possibly the most satisfying application of editing as an art.

Sooner or later the slipper slips, the coach reverts to pumpkin, and we need to jump to the next day chez Cindi–which means we need a transition. With a cuts-only edit system, transitional elements must be collected in the camera, so now it’s time to join the cast and crew during the shoot. Many camcorders have built-in fades and wipes, but you knew that, so let’s look at some other ways to signal transitions without using the camcorder’s built-in effects.

The simplest option is an actual fade out or in, which you can do if your camera has this feature. If it doesn’t, and you have the option of manual iris (exposure) control, you can slowly reduce exposure to 0 to fade out and reverse the process to fade in.

Another way is to obscure the lens so that the picture goes black. To transition out, have a character walk right into the lens. To transition in, have the character start, back to camera, and walk away from it. To achieve the effect by panning, pre-compose the end of a pan to fill the screen with a very dark area, then frame the start of the shot and, following the action, panning across to the black area. Hint: this technique works best if you can lock the exposure, so that the camera doesn’t try to compensate for the dark end-frame.

For a different effect, try a "transition to white" instead: at the end of the last shot in an outdoor sequence, tilt the camera up until the frame is filled with bright sky. Once again, an exposure lock will help keep the camcorder from resetting exposure for the bright sky. Indoors, pre-frame an overhead light, then line up the last shot, make it, and tilt up to the light.

Of course, if you begin the following sequence by reversing any of these techniques, you can make a back-to-back edit of the last shot of A with the first shot of B to create the effect of a fade out/fade in transition between two sequences. And if the pans or tilts are fast enough, the apparently continuous motion through the transition will have the appearance of a dissolve.

For another dissolve effect, try racking the lens out of focus at the end of the outgoing shot and racking into focus to begin the next one. To do this, just disable the camcorder’s autofocus control. You should know, though, that racking focus has two limitations: it doesn’t work well in bright sunlight, where depth of field is very great, and it is not too satisfying when used as a fade, because the image remains on-screen, if fuzzy.

As an alternative to false dissolves, try false wipes. For example, find a vertical line (like the corner of a wall) in each shot and pan past it. In cutting the shots together, match the screen position of the vertical line.

Another way is the intentional jump cut. Here, the idea is to create a transition by framing a character identically in each shot, while radically changing the background. By matching action across the cut, you contrast the continuous movement with the shifting setting. (For an animated example, watch Simba in The Lion King grow from cub to King while singing a single song.)

See? Both within sequences and between them, the simple, humble cut has a lot more power than you might at first think.