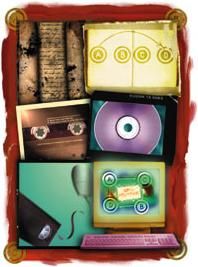 Two months ago we ruminated on analog versus digital post production and
promised parallel profundities on the sister topic of linear versus nonlinear
editing. So now we’re back to finish the job.

A decade after its introduction into the consumer
market nonlinear editing can still be frustrating, disappointing, and above
all confusing–partly because it gets all mixed up with the digital/analog
distinction that really has nothing to do with it.

That’s right: nothing. Nonlinear is simply a
synonym for random access, meaning the ability to go directly to any point
in a recording without having to trudge through all the other parts in order.
The technology was invented fifteen hundred years before digital encoding,
when individually paged books replaced scrolls. Instead of unrolling until
your wrists turned to concrete in order to reach Caesar’s Second Gallic
War, you could just open the book right at that page. Doubtless, monastic
scribes thought this newfangled random access technology was totally cool.

Back in the realm of video, the adjacent matrix
shows that linear/nonlinear access and analog/digital recording are quite
independent of each other. You can use either access type with either recording
method.


Like a Latin scroll, linear video is defined
not by its encoding system but by the fact that you have to unroll its stupid
recording medium to access the information you want. Again, "nonlinear"
is not synonymous with "digital."

Nor is it synonymous with "computerized" either. Several vendors
offer computerized editing systems (like the Video Director 200 from Pinnacle,
for instance) that are completely linear. They can control decks, build
shot lists, add titles and spiffy transitions, and automatically assemble
programs; but they cannot jump quickly to any point in a program because
they never transcribe the footage from linear tape to nonlinear hard drive.

To get a fix on what nonlinear editing really is, let’s do a lightning
survey of its basic steps, starting with that transcription from tape to
disk.

In nonlinear editing the first chore is to select the shots you (probably)
want in your finished program and copy them to the hard drive on your computer.
Once that’s done you can shut down your VCR until you’ve finished editing
because the rest of the process happens entirely inside your PC. You’ve
exchanged the linear medium of tape for the nonlinear medium of disk.

From this point on you will work with not one, not two, but three different
versions of your material: thumbnails, previews and actual shots.

The crudest version is typically a succession of thumbnail images, tiny
still pictures (or shot names) with accompanying sound that you arrange
visually on your computer screen. These thumbnails need only very small
files because they don’t contain your material; they just represent it,
like tokens in a board game.

When you’ve pushed these tokens around the screen until they seem to
be the right length and in the right order, you move up to the second version:
the preview. To check your work you instruct the computer to follow each
thumbnail back to its source on the hard drive, make a low-quality copy
of it, and arrange these dirty dupes (as the film biz once called them)
in order, complete with crude versions of transitions, titles and mixed
audio.

When this rough preview is ready (typically in a minute or two for short
sequences), you play it back, often in just one-fourth of the computer screen
and at 15 frames per second instead of 30. After judging the effect, you
go back to the thumbnail level to switch or replace shots, adjust timing,
and refine audio and effects, before building another preview to check your
revisions. And so it goes until you’ve created a final storyboard for the
whole program, complete with titles, effects and tracks, plus a low-rent
preview version of the finished product.

Only at that point do you actually utilize the original, full-quality
footage. With a single command (in Adobe Premiere editing software it’s
"make movie") the computer uses your thumbnail version as a blueprint
for compiling the finished program.

If your machine is a registered thoroughbred, it may race through the job
in real time, creating high-quality output at 30 frames per second. If it’s
like my aging nag, it may come wheezing down the home stretch two days later,
spavined but game.

Either way, the result is a movie, recorded in digital form on the hard
drive. The last step, typically, is to send the show back out to linear
tape, whether digital or analog, for storage and for performance on a regular
TV screen.

When it’s working properly nonlinear editing is overwhelmingly superior
to linear in three ways that you might label trial composite, additive
processing, and auto revision. As we examine each of these, control
your tendency to drool by remembering that sneaky qualifier, "when
it’s working properly."

First, the preview mechanism creates a trial composite version that tests
all your cuts, effects, and titles. In linear editing, by contrast, each
cut, dissolve or supervision goes straight to the record tape. If a dissolve
is too short, you have to set everything up and try it again–and again
and again, until you’re satisfied.

In nonlinear editing, just drag the dissolve symbol to expand it, make
a new preview, and check the effect. The whole process takes maybe ten seconds.
By trial compositing piece-by-piece, you can fine-tune your work on the
fly.

Even more exciting is additive processing –the ability to do one thing,
then add another layer and another to create greater richness and depth.
(This is particularly powerful in sound editing, where you can build and
balance literally scores of separate track layers.)

Working on linear systems, beginners are often dismayed to learn that they
can’t go back and super titles over edited live action or add narration
to their production sound. In linear editing you must prepare, blend and
record all your visual (and most of your audio) elements in a single pass
through the mixers. You can’t keep adding elements to previous combinations
until you get the composite just the way you want it.

Finally, auto revision lets you make a change anywhere–even at the start
of the show–without having to re-lay everything downstream of it. In linear
editing, if shot three runs too long, there’s only one way to shorten it:
re-record it and then re-lay shots four through 300 or whatever, all over
again.

Admittedly, linear editing can be done in conjunction with a computer
that prepares an EDL (edit decision list) and automates the re-recording
of shots four through X. But the hardware still has to roll back or forth
to find each shot, set up the effects, and re-record in real time. In nonlinear
editing, by contrast, all the materials are instantly accessible on the
hard drive instead.

And Now the Bad News

We said "when it’s working properly," and
you can indeed buy a nonlinear editing system that sets up smoothly, functions
reliably, and handles programs longer then 10 minutes.

All you need is maybe $20,000 for the computer, monitor, hard drive array,
video/audio digitizer and editing software. (Camcorders, VCRs, cables, etc.
not included.) For a paltry $10K you can still get a system that works at
least more often than it fails and can output material in ten minute modules
for final, serial assembly into longer programs. From there on down, however,
competence drops precipitously with price; and though you can buy a package
for $5K or so, don’t rely on it to work very well, very long, very often.

To be fair, some hobbyists seem satisfied with Pentium 133 computers,
$800 digitizer cards, and 4.3 gigabyte drives, all running under Windows
95. But these folks tend to love tinkering for its own sake and don’t care
about time and productivity issues. Also found in this price bracket are
dedicated nonlinear editing systems, such as DraCo’s Casablanca. Because
these do not bear the burden of an architecture supporting other computer
applications, they tend to remain stable and functional during use.

For the shameful fact is that almost all low-end nonlinear gear performs
poorly or not at all in some setups, and some of it goes belly-up in all
setups. Personally, I have been burnt by a $3500 card that was hopeless
with footage that lacked time code and a pair of $900 digitizing cards that
didn’t stay on the market for a year. And no wonder: to make them work I
finally had to strip Windows 95 out of two fast Pentium systems, reformat
the drive, and re-install everything under Windows 3.11!

So if you have the money, go nonlinear. You’ll love it and never look
back. And if you’re on a budget, take heart: product functionality is increasing
even as prices continue to drop. Within two years–say five at the very
outside–low-end nonlinear systems will work as well as computers now do
with word processing.

But until that happy day, good luck to you!