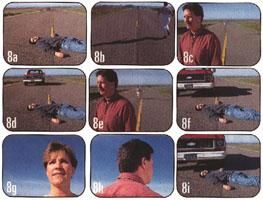 If you’ve been reading this column for a while, you probably already know
how to trim program length by cutting inept, redundant, or simply dumb footage.
If you’ve been an Edit Suite student for a bit longer, you may be learning
to work the opposite way entirely, by starting with no footage at all and
then building a show from judiciously chosen material.

Advanced readers, however, go even further: they can control the pace of
their chosen material by contracting or expanding time in the actions on
screen, and sometimes by showing two or more actions at once.

It’s easy once you know how. We’ll show you two simple ways to shrink or
grow the apparent time in which actions unfold, and two methods of parallel
cutting to present more than one action at once.

To demonstrate, we’ll use the implausible situation shown in Figure 1. In
Figure 1a, Elaine is aghast to find Mike lying unconscious on a rural highway,
with a truck bearing down in the distance. (How did Mike get there and why
can’t she just drag him off the road? Don’t ask, okay?) In Figure 1b she
spots Robert 300 yards down the road and sets off to get him. In 1c, Robert
strolls along, unaware that the distraught Elaine is puffing toward him
from the rear.

To establish a yardstick for measuring time control in this sequence, Figure
2 shows it as a single shot with each frame representing five seconds of
screen time. Force yourself to study each and every image in Figure 2 for
five full seconds and you’ll see how stupefying this unedited shot would
be.

Are you glassy-eyed? Then let’s see how to shorten this sequence or, for
a different impact, to lengthen it. Either way, you control screen time
through one of two different methods: reverses or cutaways. (You can use
both at once, but let’s keep it simple for now.)

A reverse is a camera angle that has swung 180 degrees (or nearly) away
from the angle that precedes it. That "nearly" is important because
a shift of more than 180 degrees would switch Elaine’s right-to-left screen
movement to the opposite direction, which is usually ill-advised.

A cutaway is quite literally a cut to a view away from Elaine so that for
a moment, you can’t see how much distance she’s covering. An alternative
version achieves the same thing by keeping Elaine in the frame but cutting
away from the environment in which she’s moving, as we’ll see.

Of course you can’t use either reverses or cutaways unless you’ve shot them.
The phrase "shooting to edit" means imagining the editorial process
and anticipating your needs while shooting.

With the preliminaries disposed of, let’s see how to use reverses and cutaways
to shorten the tedious story of Mike and Elaine and Robert.

Figure 3 drastically shortens Elaine’s run by using a reverse angle. In
3a she’s just starting toward Robert and in 3b a moment later, she’s almost
reached him. In between, we’ve discarded fifteen seconds worth of real-time
running.

Why is this omission often undetectable? Because a reverse rotates the camera
position so drastically that the same background does not appear in both
shots. Without comparing Elaine’s position to fixed background features,
it’s hard to tell how far she’s moved.

Reverses are great for condensing relatively brief periods. For a distance
this great however, a simple reverse may not, in fact, conceal the compressed
time completely. In this situation it may be better to use a cutaway instead.
Figure 4a shows Robert in the foreground and Elaine way down the road. In
the cutaway shot, 4b, Robert swings around, as if he’s just heard her. (Incidentally,
a sound effects crescendo of sneakers on asphalt will assist the illusion
here.) By 4c, Elaine has almost reached him.

As you can see, the cutaway version is more effective for two reasons. First,
it consists of three shots rather than two, so the elapsed screen time is
in fact a bit longer and therefore, less drastically condensed. Secondly,
the cutaway eliminates both Elaine and her background, while distracting
the viewer’s eye with Robert’s movement. By the time Elaine reappears in
4c, we’ve lost track of where she ought to be after such a brief run and
accept the suggestion that she’s covered the entire 300 yards.

So take your pick: a reverse is more economical but a cutaway is more thorough
and both can decrease screen time to cut out the dull parts.

But suppose you want to increase the screen time instead. Why? To crank
up the suspense, of course. Will Elaine ever reach Robert? Will Robert ever
notice her? Will they return to comatose Mike in time to rescue him? Artificially
stretching the time of an action can turn the screw of tension tighter.

To do so, you use exactly the same tools but perform exactly the opposite
trick: employing reverses and/or cutaways, you expand screen time by making
the actor cover the same ground more than once.

Here’s how it works with reverses. The shots in Figure 5 alternately favor
Robert (5a, 5c, 5e) and Elaine (5b, 5d). During each shot, Elaine covers,
say, 50 feet as she approaches Robert. But each successive shot begins with
Elaine 20 feet farther back than she was at the end of the preceding shot.

If say, she ran from 0 to 50 feet in shot 5a, then she runs from 30 to 80
feet in 5b, from 60 to 110 in 5c, and so-forth. By the end of shot 5e she
has run 350 feet but because of the overlapping reverses, she is only 230
feet closer (and the audience is biting its nails). Again, because the pairs
of reverse angles have totally different backgrounds, there are no fixed
landmarks from shot to shot by which to check Elaine’s progress.

We said that reverses and cutaways can be used in combination, as you can
see from Figure 6. In addition to the master angles favoring Elaine (as
in 6a) and Robert (as in 6b) we’ve included closeups of Elaine and Robert
as well. Here again, cutaways or reverse/cutaway combinations are more effective
in more exaggerated time stretches because the simple back and forth of
plain reverses can grow obvious.

Notice one other thing about 6c: It counts as a cutaway from Elaine even
though she is still in the shot. That’s because her plain sky background
excludes all details that could give away her true position.

Meanwhile, Back at the Ranch…


But even with reverses and cutaways, the Figure
6 sequence is still not as suspenseful as it might be. That’s because we’ve
lost sight of poor supine Mike and the killer truck hurtling toward him.

This approach has two major advantages: it obviously builds suspense, but
it also provides built-in cutaways to help control time in each action.
In effect, the shots of each sequence are cutaways from the other sequence.
No wonder cross-cutting is such an old and well-used storytelling technique.

Like the other techniques we’ve covered, a greater variety of angles enriches
cross-cutting, as you can see in Figure 8. By featuring Robert as well as
Elaine and poor old Mike, we’ve finally gathered all the participants in
our drama into one escalating crisis.

Cross-cutting can be expanded to include even more simultaneous sequences.
And if you want to see parallel editing carried to delirious extremes, rent
Stanley Kramer’s It’s a Mad Mad Mad Mad World, in which I forget
how many groups of greedy little people race one another toward a financial
jackpot.

Meanwhile, Back at Reality…

That kind of editorial time control is so sophisticated that it wins Academy
Awards. Nevertheless, it relies on the same simple techniques that you can
use to manage time flow in your own video projects.

First, remember that video time has no fixed speed. You can expand and contract
events to suit your dramatic needs. Second, keep in mind that control of
time is really inseparable from control of space, as we’ve shown with the
now thoroughly winded Elaine. Finally, don’t forget that editors can work
only with the material provided, so shooting to edit is crucial to success.