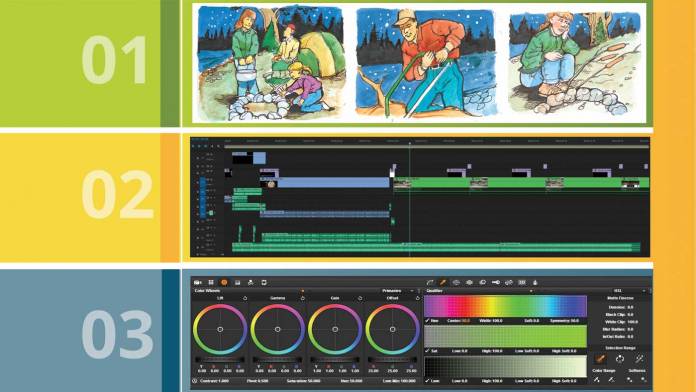 As a video editor, you need to be proficient with multiple post-production techniques. However, the knowledge and ability to execute these techniques is only one part of the equation. A successful editor also understands the various stages of video editing and when to implement each technique. In doing so, you possesses a great amount of control in shaping the resultant video.

The stages of video editing are sequenced for efficiency. Each stage builds upon the work that was accomplished in previous stages. This saves you time by eliminating the need to work on footage that will never make it to the final edit. The footage that hits the cutting room floor never needs finishing.

As odd as it may seem, post-production begins with preproduction. Some of the best edits a video editor will ever make are on paper. The moment a script becomes a storyboard, you should step into action.

Writers utilize a technique of writing out separate scenes on individual index cards. This way they are able to shuffle their scenes around and see how different narrative progressions affect their overall story. The significance of a scene is changed by its juxtaposition to other scenes, and these choices begin with the storyboard. You can cut each shot out of the storyboard and tack them to the wall, moving around different shots or whole scenes to forecast what the final edit will look like. The edits made in preproduction that make it to the screen are much quicker to make in post since they are decided before the camera ever rolls.

In a typical production, more footage will be produced and shot than will be used in the final edit. If you wait to view every piece of footage after production has wrapped, you will find yourself spending many long hours in front of the screen before you even begin your edit.

Reviewing dailies, footage that comes in as it’s shot, allows you to get a jump start on post-production. This way you can digest the footage in smaller chunks and compare what you see with what you conceived during preproduction. Reviewing footage as it comes in also helps you to identify holes in production — shots that are missing but would help advance the story. This way, you can make a request for production to capture the footage you need to complete the edit.

The first assembly is when the action starts to pick up for the video editor. Using the storyboard as a foundation, you start making selections. Usable footage is trimmed and marked, while the bad takes are cast aside. It is not uncommon for you to set up your timeline to resemble the storyboard. You take all the usable footage, often times multiple takes of the same shot, and place them in sequence. The result is an extended video of each potential shot for the final edit. This portion of the process is for internal purposes, to be shared with the director and producer. Many directors like to make a paper edit. They take notes while screening the selects of the first assembly and then write out what clips they like and don’t like, sometimes rearranging them into a new order.

B-roll is also separated at this time. Its content is logged and it is sorted into a hierarchy according to the editor’s needs. This is all contingent on the project as the organizational needs of the footage are dependent on what’s most needed for the video.

The structured organization of the first assembly sets you up to make the rough cut. The rough cut is the first true edit and is the stage in which you start to display your craft as more than a technical exercise. At this stage, it is no longer about solely discovering and organizing footage, it’s about storytelling and crafting a message, using the footage from production as a foundation to achieve the director’s vision.

Timing is vital to the rough cut. A video editor influences the timing of a video more than any other person who touches the production. It is during the rough cut that you start to play with the timing. Whether making fast cuts or extending pauses, here you begin to create what will become an emotional connection with the audience.

The stages of video editing are sequenced for efficiency. Each stage builds upon the work that was accomplished in previous stages.

The rough cut is meant to be shared. The video editor works with the director, producer and a client, if it’s their project. Communication is kept open between all parties and much dialog takes place, helping to shape the overall edit. The parties agree on what changes need to take place before the edit moves on to the final cut.

The final cut of an edit is when the cutting and timing of the footage is finalized. It’s not the final version of the video, ready for release, but it’s awfully close. The edit at this stage is the one that will be used for several finishing steps, all of which need to synchronize perfectly with each other. For this reason, the final cut is often known as picture lock or frame lock, meaning that the frames in the edit will not change in time from this point moving forward.

The final cut is not just about locking things down however, it’s also about elimination. A scene might be finalized, but that doesn’t ensure that it stays in the production. Once all the scenes are cut and precisely timed, you review them with the director and producer. If there’s a scene that doesn’t work or doesn’t contribute to the overall narrative of the video, it’s eliminated.

There’s a dichotomy to the final cut; while some scenes are removed, there is also a great amount of content added in at this phase. First, visual effects and graphics are added to the video. Most visual effects are planned out during preproduction but aren’t generated until post-production because the visual effects artist needs know what footage they’re specifically working with to make the effects seamless. Graphics are also planned in advance and are fine tuned to coincide with the final edit.
What the audience will see on screen is only part of their experience. After visual effects and graphics are added, audio sweetening is performed. The final cut is round tripped to an audio editing suite, sometimes on the workstation, for the placement and editing of sound effects and musical underscores. Dialog is mixed down with these elements to create an audio track that supports and carries the accompanying video.

The final step before deliverables are rendered and shipped is color grading. Color grading is the stage in which you, or a colorist, manipulates color and tonal qualities of the video image to craft a unique look that helps set the mood for the video and visually tell the story. The advent of digital cinema cameras, greater computing power and more advanced codecs has increased the implementation of color grading. 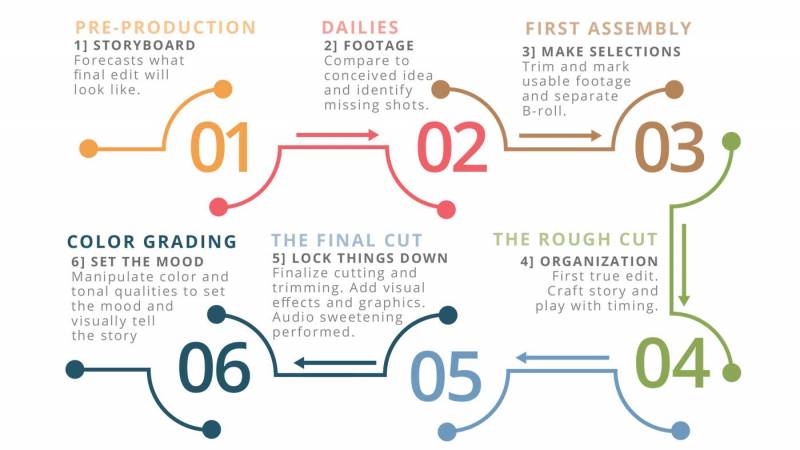 Post-production is a pathway; a video editor who knows how to navigate it will find their production and creative vision as the final destination. Video editing isn’t a single step in video production. It’s a myriad of tasks and choices that, when sewn together, create a compelling piece of work.

Sidebar: The Preditor: How the Video Editor Shapes the Story

It’s a common practice in independent production companies and commercial video studios to have one person take on the role of producer and video editor. The reason for this is simple, in today’s pipeline the editor has the potential for more influence over the final video than any other person in the production. Here’s five quick reasons to help explain why.

Smaller production companies and commercial shops don’t have the luxury of filling each chair in a production with multiple people. Crew members need to wear multiple hats, and the roles of producer and editor go hand in hand.

If the producer is the person inherently charged with understanding the intimacies of a production, then it’s only fitting that they are the person sitting at the helm and steering the ship through post-production.

Post-Production is Bigger than Ever

Today’s post production workflow opens up many new doors for the video editor. The editor is responsible for more aspects of post than ever, and they’re expected to do all it in a short span of time.

The client is the most important person when it comes to creating a video, after all it’s their video. A producer is often tasked with serving the client, satisfying their requests, keeping them informed and helping them understand what is possible. By eliminating the role of the middle man, the preditor is able to communicate directly with the client and craft the video to meet their specific needs.

A Shift in Vision

The overall vision for a production can shift as it goes from preproduction, through production and into post-production. These changes always run downhill and land on the editor’s desk. If the editor is guiding the project from the beginning, they’ll be better prepared to handle changes at the end.