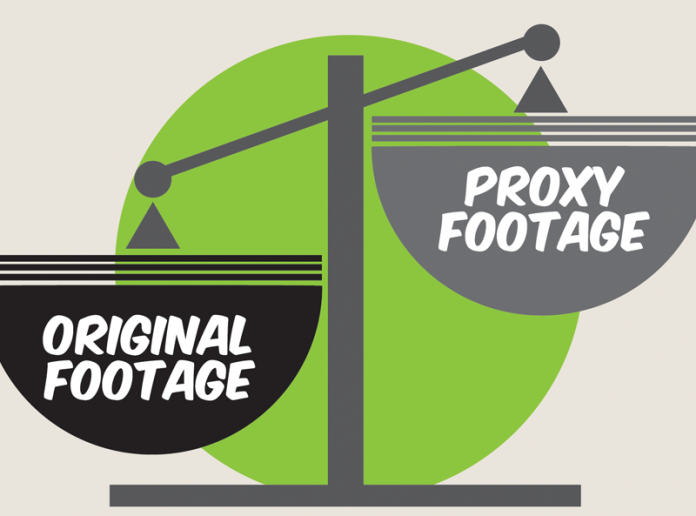 There's wisdom in the old adage "never bite off more than you can chew." It's good advice because too much of a good thing can cause one to choke. The same rings true with video editing. Technology continues to grow and push the boundaries of what's possible in the world of video editing. Screen resolution continues to increase, effects become more verbose, and the upper limit of editing computers is stretched to the max. Video editors need to be prepared for the edge of the envelope and offline editing can help them swallow the biggest of projects with ease.

Reasons for an Offline Edit

There are many reasons for offline editing. The earliest use was so video editors wouldn't have to use source tapes over and over again, wearing them out. It also allowed the final edit of a tape workflow to come from the source footage instead of footage that was duplicated and degraded through copying across multiple edits. As video editing transitioned from a tape based workflow to an entirely digital workflow, offline editing was used so a video editor could work in real-time with the reduced file size of proxy footage. This way the video editing process wasn't slowed down because of a computer's difficulty in handling full resolution footage.

Technology continues to grow and push the boundaries of what's possible in the world of video editing.

As technology progresses the software and hardware used in video editing becomes more robust and able to handle larger files. As a result, many smaller production houses and one-man band producers no longer need to do offline editing.

Technology is now in a state of transition again, today's digital cinema cameras are outputting high resolution footage with minimal compression. This digital cinema footage can stress smaller computer systems and video editors are once again finding the benefits of offline editing. It helps them to work efficiently in real-time, tackling projects with high volumes of digital cinema footage.

Another use for offline editing that is common in larger post-production facilities concerns the need for multiple editors to access source footage. Post-production houses employ their own editors and contract freelance help as well. These editors are working on projects that utilize the same source footage. If multiple editors are in multiple locations, it makes much more sense to give them an offline project to work on. Video editors can then work on the project conveniently from their remote location and turn in an EDL to the post-house. The project is then conformed online using an editor's EDL and the facility's source footage.

It may seem the small-packaged remote convenience of an offline edit is most advantageous to a larger post-production facility working with a freelance video editor. This same convenience is beneficial to the one-man show. Sometimes a video editor needs to be out in the field or work on-site with a client, away from the editor's editing bay. If video editors set up the project before they travel, they have the convenience of their project in a smaller sized package and won't need the same amount of hard drive space or computational power to get the job done. Video editing with transcoded digital cinema footage is possible on a laptop because of offline editing.

Pros and Cons of Offline Editing

The obvious workflow proficiencies of offline editing aren't the only reason to consider it as an option for a post-production workflow. One of its biggest advantages is the security it brings into the post-production process. The use of proxy files helps prevent source files from being relocated, changed, and corrupted. There's always a risk of corrupt data, but the additional step of creating duplicate files to work with is a valuable safeguard.

Even with the given conveniences and benefits, offline editing isn't always the best solution. There are several influential factors to take into account, ones that may steer video editors away from choosing to perform an offline edit. There is an efficiency gained in an offline edit when the source footage is too much for an editing system to handle, but an offline edit does introduce a few extra steps, adding more time into the editing process. The software and hardware of today's editing tools are quite remarkable. Many popular video editing applications, such as Adobe Premiere Pro and Final Cut Pro X, are able to handle large digital cinema files as long as they're on a capable hardware system. With the right system setup, the process of offline editing could be superfluous and unnecessary to save time. Another issue which isn't a major one, but it does peek its head above water from time to time is the process of conforming an EDL inside an online edit, which doesn't always go as planned. There are times when some edits or effects don't translate. If these mishaps aren't caught by the editor, they can create unintentional edits that change the entire video. In a medium which relies on precision, discovering technical mistakes can create mayhem.

Technology is going to continue to grow. Video resolution and data rates will continue to increase. The biggest barrier all video editors will have is the computational power of their editing computers and whether or not it will handle new file formats. Surely there'll be times that new formats choke up machines, bringing even the most seasoned video editors to their knees as the video editing process moves to a crawl. Fortunately, video editors will have the process of offline editing to keep things moving in manageable, bite sized chunks.

It seems like just yesterday 1080p HD was new, exciting, and a screen resolution of colossal size. Today, 1080p pales in size to the lumbering magnitude of 4K. It's not just a fad either, 4K is showing up in timelines everywhere. A little bit of knowledge goes a long way for the video editor and understanding the basics of an offline workflow is a good thing to know. There are variances across different editing systems but the basics remain the same.

An offline edit is much easier to perform if there are accurate records of what was shot. The shot log is used during the ingest to tag footage with metadata.

This part of the process is the same as a regular online edit. The footage from the shoot is transferred from the recording media and onto the editing computer. The footage is best tagged at this time with metadata, incorporating information from the shot log.

Now the editor goes to work, cutting and assembling the offline edit using the proxy footage. All normal stages of editing are performed at this point in the process.

Once the offline edit is complete an EDL or similar reference file is output from the video editing program. The EDL is a breakdown of what edits were made in reference to the timecode of the footage, as well as transitions, effects, and other editing data.

Any transition or effect that wasn't translated through the EDL needs to be rebuilt and applied to the online edit. Once these tasks are completed, the online edit is ready for it's final color grading pass and for the final audio mix to be dropped in place. From there the video is ready to be output for delivery.