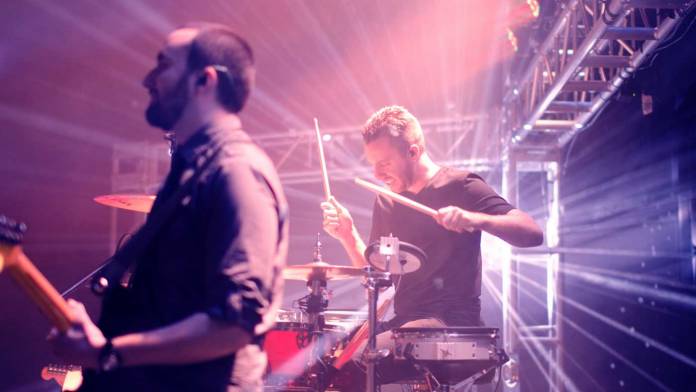 There are naysayers who believe music videos to be a dead art form. Entire networks once dedicated to music videos have dropped them from their programming. The number of mainstream musical acts spending large budgets on music videos has decreased in recent years. This isn’t a negative, the number of music videos posted online far eclipses the number produced for broadcast in the past. This is a great time for making music videos and it doesn’t take much to get in the game.

Cutting a music video is a great exercise for the video editor. It helps to establish a visual rhythm, to match an established pace, and hone the discipline of a frame accurate edit. The skills that are refined from editing a music video improve the overall talents of an editor. Most of all, it’s fun to do. There are some basic practices used in cutting music videos that ,when applied ,will allow an editor of any skill level to produce a rock solid piece.

The most important thing to know is the music dictates the edit. Cuts, transitions, and effects should coincide with the flow of the music, becoming a visual extension of the song. The coordination of the music and the edit builds the overall viewing experience for the audience. The audio helps to lead and pace the changing imagery. A straight cut between two clips of video can be visually jarring, the juxtaposition of two different images is not natural to the human experience. When a cut is synced in time to an audio hit, such as a beat in a music track, it becomes a natural transition. The same thing goes for effects and transitions that coincide with audio events, the audio carries the impact of the visual effect. A music video is a straightforward example of video coordinated with audio. When making a music video the goal of the video editor should be to craft the most cohesive integration between video and audio, effectively engaging the audience with the whole of the two parts as they become one.

Crafting a tightly integrated music video can be tricky. The video needs to be a partner for the track and visually tell the story of the song, whether it’s a narrative or a performance by the music artist. Every frame counts in a music video and every edit needs to match up with the music in the context of the video. The music should drive the edit, with the beat often supplying the perfect moment for a cut between shots. This should be considered more of a guideline and an opportunity but not a hardline rule. If a video were cut with a different shot coming in at every single beat it would be overwhelming, disconnecting the audience from the song. The overall rule for the video editor is to use the pace of the song to dictate the edit and to use the audiotrack as the framework upon which to build the edit. In other words the mood and feel, the aesthetics of the song, are used to establish the visual style and pace of the video, while the actual audio becomes a map of the frames where the editor will change and craft the visuals. Transitions should coincide with the music, occuring with tight frame accuracy.

The overall rule for the video editor is to use the pace of the song to dictate the edit and to use the audiotrack as the framework upon which to build the edit.

Reference the song’s instrumentation and structure through the video’s visuals. Whenever a particular instrument or riff happens in the track it can be reinforced by the repetition of the same effect or a related visual. This doesn’t just apply to the instrumentation, structure is an important part of songwriting and can be applied to video editing. Popular music often follows similar patterns consisting of multiple verses, a repeated chorus, and the use of a musical bridge to transition between key and tempo changes. The video editor should take note of these musical structures and build a corresponding visual style to match. This way the visual repetition of the music video will follow the auditory structure.

It’s All About the Music

The foundation of a well edited music video is the audio track. The music is what drives the edit. The video needs to dance to the music.

The audio should be the first asset laid down in the timeline of the video editing program. This provides the simplest tool to use in cutting a music video, the audio waveform. It’s the visual representation of the audio track’s amplitude, and video editors can use it to their advantage. The audio waveform gives the editor visual cues to what’s happening in the music track, hard beats will show up as spikes and the rise or descent of the music is easy to see.

The video editor can use this as a map to block out and place the varying video clips that will make up their edited piece. Clips of video can be placed and cut at a frame to match up with an audio event that is visible in the waveform. For instance, many songs fade out at the end, an editor can keyframe a video clip’s transparency to have it fade out with the music or have a graphic fade in as the music fades out.

The mood and feel, the aesthetics of the song, are used to establish the visual style and pace of the video.

The audio waveform is a great visual tool, it’s also a rich source of data that several plugins and effects take advantage of to create stunning visuals. More than a visual representation, the audio waveform is a numeric value, a data set, that plugins can reference and use. Specialized plugins create visual effects that use data from the audio waveform. Tools such as Trapcode Sound Keys and Boris Beat Reactor allow the editor to link the property value(s) of an effect to the audio waveform. This creates visuals that are precisely synced to the music. A video editor who is experienced in Adobe After Effects can do this through converting the audio amplitude to keyframes and using expressions to link property values to the resultant keyframe values.

Another visual tool that helps in cutting video to the beat of an audio track is timeline markers. Markers are indicators placed on frames in the timeline of a video editing program. The most convenient way to place a marker is using a keyboard shortcut. Most video editing programs allow for markers to be placed with a single keystroke in real time as the video playhead plays through the timeline. This makes it easy for the video editor to play the song through, tapping to the beat and setting markers as they go. After the markers are placed, the editor can go back and refine the placement of the markers. Not everyone has the impeccable sense of rhythm that belongs to George Michael Bluth and his woodblock. Markers are a hard line reference to a specific frame in the timeline. Video editing programs allow for snapping, with this feature a video editor can drag a clip relatively close to a marker and the clip will “snap” into place, locking the clip into sync with the marker, placing the clip exactly where the editor wants it.

Music videos are one of the most diverse and open ended forms of video to create. They do require a great attention to detail and a tightly crafted edit to showcase the music they present. Recent shifts in the music business, the proliferation of independent recording artists, and the incredible reach of online distribution has set up the perfect environment for music videos. Video editors should find the opportunity to craft one, it will help them grow in ability and at the same time be a fun exercise in creativity.

The great thing about music videos is there are no rules. They are an invitation for the video editor to write their signature. Many famous directors birthed their careers creating music videos. Music videos allowed them to fully express their artistic vision and gave them a short format in which to establish their storytelling techniques. This also goes for the auteurs of the various visual styles that became trends throughout the years. Music artists use videos to gain notoriety and gather attention; what they want is something new, something that’s never been seen before. In turn the directors and editors cutting their videos are given license to try something new. When making a music video keep these things in mind.

Music is ripe with storytelling, use the video to emphasize the story of the song. The visual story can also be in contradiction, sometimes the visual narrative works best as a failed allegory to the lyrical story.

2. Establish a look and stick with it.

There are no rules and there is the opportunity to try new and wild things. Go ahead and do that, but once there is an established look for the music video, stick with it throughout the entire piece. Build variances off the established look but don’t make it something entirely different.

Music videos have been around for quite some time. A video editor who is familiar with past practices and styles is able to build off of past successes and avoid disastrous mistakes. Don’t imitate the videos of the past, instead build off of them and create new looks that reference the old but are presented in a fresh and exciting way.