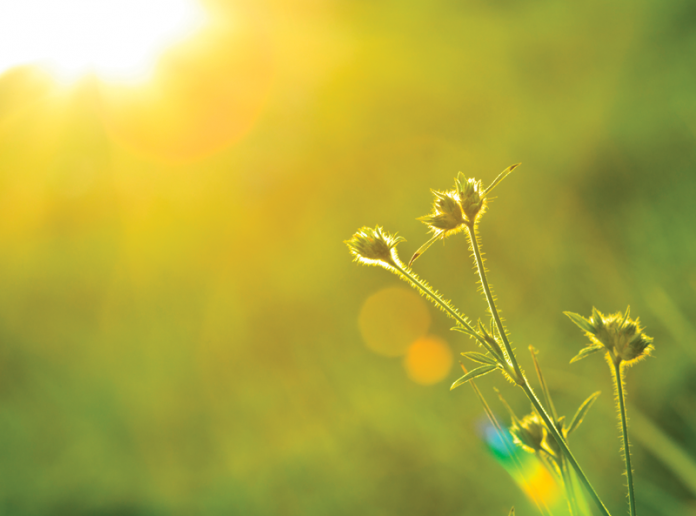 It’s important to understand what a lens flare is before it can be used as a tool in the video editor’s arsenal. A skilled video editor knows how to use these optical anomalies to advance their story. It’s become such a popular technique that lens flares are intentionally crafted in post and are not necessarily the product of a careless camera operator.

A look inside the lens reveals many things, none of which shows up on screen. Or does it? Lens flares are directly influenced by the lens of the camera. The visual appearance of a lens flare is the interaction between the camera’s optical system and a light source. Different lenses will produce different types of flares because of the varying physical structures of the lens and its material make up. A lens with a greater number of elements, such as a zoom lens, will produce a greater amount of artifacts in the flare.

What is a Lens Flare?

When a light source is in frame or sits just out of frame but is casting light into the lens, it creates a lens flare by reflecting off the elements inside of the lens and onto the image sensor. Reflections of light bouncing off of the actual lens elements disperse through the lens and show up as a lens flare. Likewise, light cast onto the lens refracts through the lens elements with similar results. Most lenses have an anti-reflective coating that minimizes the effect but not all lenses are equal nor do they entirely prevent internal reflections from happening.

These reflections show up in the final image in several different ways. These can appear as streaks, halos, starbursts, and polygons. The shape pattern of an artifact is determined by the lens itself. The polygon shapes of light are a result of the lens aperture and will exhibit the shape of the lens aperture. For example, a lens with seven blades in the aperture diaphragm will produce 7-sided polygons whereas a lens with five blades will produce a 5-sided polygon.

One of the most common occurrences of a lens flare is the appearance of a haze that washes over the entire image, reducing the contrast and saturation. This is caused by a bright light source, such as the sun, casting light onto the lens but not being visible in the camera’s view. The refraction of the light source inside the lens washes out the image. The easiest way to prevent a haze is to use a lens hood and to position the camera so it does not pick up any lights outside of its field of view. In terms of creating lens flares, the haze effect is one of the easiest to reproduce.

A lens flare reflects light onto the image sensor and appear as streaks, halos, starbursts, and polygons.

A lens flare reflects light onto the image sensor and appear as streaks, halos, starbursts, and polygons.

A popular look for simulated lens flares, that finds its roots in the cinema, is a long horizontal streak with a slight haze around it. This is an emulation of the flares created by anamorphic lenses used to film widescreen cinematic formats.  These long streaks of light were heavily employed in J. J. Abrams’ 2009 film Star Trek. Plug-ins that create simulated lens flares have controls that allow the editor to determine the length, width, and color of these long streaks.

As with any creative medium, the most beautiful results can originate from mistakes, flaws, and the unexpected. In recent years the popularity of lens flares ascended to new heights. Videographers intentionally compose shots to emphasize the effect, while video editors carefully craft lens flares in post production to draw the audience’s eye. A lens flare can be a powerful tool in a production. It has the ability to add realism, to remind the viewer that what they are watching is a video that was shot with a camera. In a unique turnaround, lens flares are utilized in animated films to add a bit of realism to a scene that’s fully manufactured. For this same reason, visual effects artists will add lens flares and haze over shots to distract the viewer and help tie together the multiple elements used to create their compositions. It helps create the illusion of reality. Lens flares are utilized to add color to scenes and create thematic colored looks to carry a production. A video editor can also use lens flares as transitional elements, the flare becomes a vernacular element that carries a bloom transition between two shots.

The market is filled with numerous tools to create and add lens flares in post production. Some products simulate the lens flares and others utilize stock footage of flares that were created with cameras and real lenses.

Video Copilot offers a plugin, Optical Flares: Creative Lens Flare Studio, with options for Adobe After Effects and Nuke. They also offer a deep range of presets. Optical Flares is able to utilize 3D lights in the user’s After Effects composition, simulate dust and lens scratches, and track with luminance values in footage. The quality of the flares from Video Copilot are stunning. It’s a plugin that is of benefit to the user because of its fast render speed. Video Copilot’s Optical Flares allows the user to generate effects like the ones seen in many of today’s movie trailers and commercial spots.

One of the most intensive and complete plugin suites available is Genarts Sapphire. It has versions that run on almost all professional platforms on the market today. Genarts Sapphire is complete with numerous effects including ones for lens flares and volumetric lighting. Combining these effects with others in the suite allow the editor to create complex looks, all within a single interface.

Rampant Design Tools offers a variety of drag and drop stock lens flare and light elements that can be used in any video editing program. Rampant’s different effects volumes are collections of Quicktime files that can be added to any project, without having to install or use a plugin. Rampant LightFX are real lens flares, captured in camera over a black background, providing the user with real effects. Rampant Design Tools carries a variety of real and simulated light effects, making it quick and easy for the editor to add them to any production.

Lens flares are just one example of how a regular occurring aberration in video can become something magnificent and useful. Editors can use a lens flare to their advantage, even by adding one in when it isn’t part of the original footage. A video editor can learn this technique by observing how it’s used in popular videos and films. By mimicking the masters of the post production industry, a lens flare can shine new light on edits that are stuck in the dark.

Simulating a Haze Effect in Adobe After Effects

The haze created by a light source outside of a camera’s field of view is easy to recreate in Adobe After Effects. It can help to add an emotive feel to a video or take some basic footage and turn it into a background to anchor text or other graphics.

First, choose a clip that is well lit and illuminated by a source outside of the field of view. Import the clip into Adobe After Effects and create a new composition with the footage as the base layer.

The final step is to create a new solid above the adjustment layer. When selecting the color of the solid, make sure the hue value matches well with the light source, set the saturation value somewhere in the 30th percentiles, and set its brightness slightly darker than neutral. A dull bronze colored HSB value of (53, 37, 48) works well on a sunny scene. Use the Ellipse Tool to create a large elliptical mask over the solid with the center of the mask being offscreen, roughly centered where the main light source of the image would be located. The mask should intersect the composition as a large curve sweeping through the shot. Adjust the Mask Feather to be several hundred pixels wide. Finally, set the blending mode of the solid to be screen.

The result should be a simulated lens flare haze across the footage that in the right context will lead the audience to believe the lens flare was intentional.