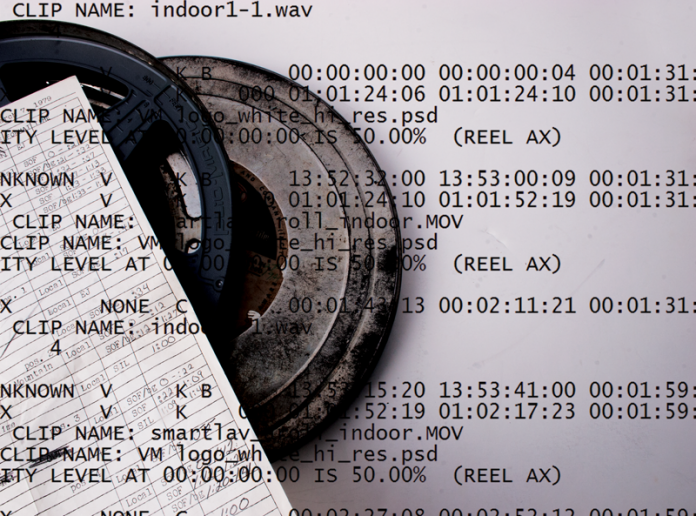 Once upon a time, in the land of acetate and silver halide crystals, a bin was a bin, film was real. It was a giant canvas bucket filled with a spaghetti sea of film. The tangled mass was all workprint, copies of the source footage, cut into individual takes. The only way to make sense of it all was to label each strip of film and have it marked in a corresponding log on paper. During production each camera take was noted in a shot list. There were no databases filled with metadata, enabling the editor to bring up whatever shot the director called for. There were only lists written down on paper. The more accurate the shot list, and the more information it contained, the easier it was for the editor to pull the needed footage.

This might have seemed a tedious process but it was safeguarded from computer crashes, hard drive failures, and data dumps. It was a guiding force in post-production. The film editor would take detailed notes about which clips were used, down to the frame level accuracy. They wrote these notes into an EDL. This way, when it came time to make a final cut on the original footage they would get exactly the same film as the one they had cut to pieces in their bin.

The Birth of EDLs

In its infancy, video production adopted the practice of offline editing from the film world. Video editors would not work with the original source tapes, they would work off copies. This protected the source footage from being corrupted or damaged. It’s known as offline editing, a process that’s still used in larger post-production facilities and digital productions working with data-intensive video formats.

In the tape-based workflow of the past, editors would create their edit by playing one tape and recording the desired shot onto another tape. When that clip was recorded they would cue up the next tape to the shot they wanted and record that clip. As the edit progressed, the editor would keep a detailed log of every clip used. The log would contain information about which tape, or reel, the clip came from and the timecode of the footage that was used. It would also denote any transitions between clips and overlap, for example the audio from one clip being used underneath the imagery of another. This log mirrored the linear order of the edit. It was a long process and one that demanded great attention to detail from the editor. The completed list is known as an EDL. The editor would use it, along with the source footage, to put together the finished production.

EDLs and offline editing are still used today, and are a lot more advanced than a listing of timecode on paper.

EDLs are now digital and most video editing applications are able to output an EDL, or a more detailed digital format, for use in other applications. The two formats that are most widely recognized today are Extensible Markup Language, XML and Advanced Authoring Format. These formats allow an editor to move an editing project from one editing application into another. For instance, Final Cut Pro 7 can generate an XML file that can be read by Adobe Premiere Pro. An editor working in Final Cut Pro 7 can edit a production and send his or her edited project, through the use of XML, to an editor working in Premiere Pro to finish it. The real power of these output formats lie in the interaction of conforming edits to a suite of task specific applications. Edits and timelines are commonly transferred to color grading applications, visual effects suites, and audio editing workstations. This allows the project to be worked on in task-specific applications and transferred back to the video editing application for final output and archiving purposes.

An EDL is a great tool and often overlooked on one man crew productions, but a similar organizational tool that works great on any size production is the shot list. There are three common shot lists that are helpful to any production. All three have their place and are useful to the editor in post-production.

The first shot list is the one created from breaking down the script in pre-production. Often times this is referred to as the shot breakdown. This is the list the director and director of photography work from when shooting during production. It tells them exactly what shots were planned and what they need to get on camera. It may seem irrelevant to the post-production workflow, but having it on hand can help the editor to know what to look for and cue up what the director is looking for in a particular scene.

In the early days of film and video editing, the editor would keep a detailed log of every reel, clip, timecode and transition used. It was a long process and one that demanded great attention to detail.

The second shot list is the shot log from production. There should be a record in the production shot list for every take that the camera rolled on. Each record should include the reel number (reel being the tape, card, or whatever recording media is being used), date, scene, shot number, take, and timecode. It helps if this list includes annotations about each take, noting whether it was a good or bad take, or any information that would be helpful. This list is of great value to the editor. It can save hours of scrubbing through footage by helping the editor quickly locate shots. Today’s video editing applications have the ability to use metadata, information that’s associated with each individual clip. The information collected on the shot list from production can be entered in with the corresponding footage during the ingest.

The third shot list is the one generated in post-production. It’s the record made by the editor to detail what clips, and how much of each clip, was used in the edit. It can serve as a guide to anyone who joins into the post-production process and it can help the editor rebuild the edit if something catastrophic happens to the edit bay.

Telling stories with the moving image is a collaborative art and as such, it gets messy.

The tools have changed over time, even the format of the medium has changed, but the purpose and intent behind the tools is still the same. There’s no reason to wallow in the mess, the long standing practices of EDLs and making shot lists have helped to keep productions organized for years. There’s no reason to abandon the practice either. Instead, embrace it and find the peace that comes with knowing everything is in its proper place.

Keeping an accurate shot list during production creates an incredibly useful resource for post-production. Here are five tips on how to set up a useful shot list to be used in post.

During production, use a clapboard and be sure to fill it out with detailed information; the production’s name, reel or card number, scene name, shot number, take number, and the date. Make sure it’s in the shot every time the camera begins recording, and place it at the tail of each shot after the scene is complete. An easy way to discern the head and tail of each clip is if the clapboard is inserted upside down into the frame at the end of each shot.

2. Prepare Ahead of the Shoot

Prepare a paper shot log before the shoot. Use a spreadsheet to chart out all the information that is recorded on the slate as well as timecode. Make sure to have plenty of copies on hand, multiple takes will happen. Commit someone on set to taking accurate records throughout the shoot, matching up the slate with the shot log. Use this list for notes on each take as well.

After the shoot make several copies of the shot list. Think of this as a backup to any unforeseen losses that might occur to the original shot list.

Use the metadata to set up bins and folders inside the video editing application. The recorded information will make it easy to find any clip, from any scene in the production. It’s an organizational tool and will help anyone involved in the post-production process.