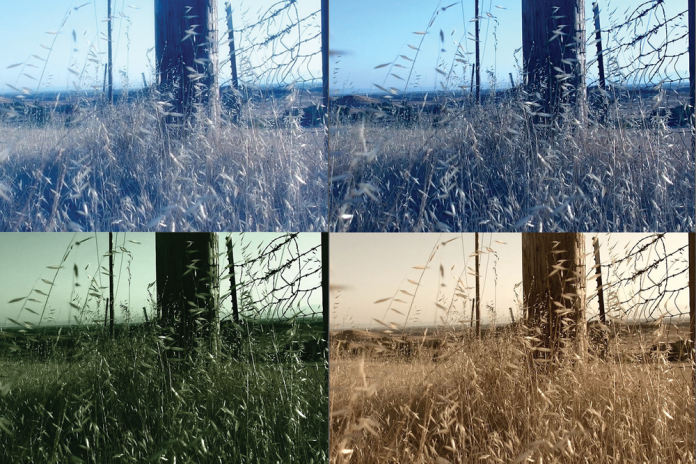 Color is a fundamental element of design and visual storytelling. Traditionally, artists use it to set the mood for their work, the tone of their voice, and to carry a theme in their craft. In the world of video, color grading is an art form all its own. In the not so distant past, the post-production process of color grading was reserved for expensive edit suites, requiring specific and finite tools. Today, color grading is accessible to any editor and the tools to accomplish it are found in most video editing programs. Color grading can make a drastic change to footage, turning day into night or making a drab shot into a vivid landscape. It can make the backlot look like a location from a world away. It doesnât need to be bold and loud, and can be a small tweak to footage. Even a subtle color grade can have a profound impact on an audience.

Why use color grading?

Color grading allows the video editor to control the image. A video clip conveys more than the content it contains. A varied and intentional color palette in video can inform the audience in a multitude of ways. The mood of a narrative is enhanced by the use of color grading. The Walking Dead on AMC is a great example of this. The series is about a group of people trying to survive a zombie apocalypse. It’s a dreary and bleak world. Visually it’s emphasized through the use of dark muted tones and the absence of bright colors.

Different locations have different nuances, a varied color palette can bring that out. Color can help orient the audience to the location on screen. Films such as Steven Soderburgh’s Traffic rely on the use of color as device to denote location as well as differentiate storylines. There are times when producers finds themselves with a catalog of problematic footage and color correction is incapable of fixing it. When bad footage needs to be used, color grading can rescue it. A color grade masks over the technical issues of the footage, using a crafted appearance that helps sell the story. Video journalism shows often do this with nighttime surveillance footage. Instead of using underexposed grainy footage as is, the editor uses color grading to simulate a look that resembles ânight visionâ videography.

In order to create stunning color with the tools of post-production, itâs important to understand some basics about color in video, how it works and the terms to define it. This allows an editor to understand the majority of tools used in color grading.

Hue is the pure spectral color that expresses or defines a general range of colors. Simply put, this the general term for a color; such red, purple, blue, orange, etc. It defines a general position of color on the color wheel.

Saturation is the amount of a hue used in defining a specific color. When a color is void of any saturation it is black, white, or a variance of grey. A color that is fully saturated has the maximum amount of hue possible. Partial saturation creates a range of colors, from muted dull tones to rich vibrant colors.

Luminance is the brightness of a color. By itself, itâs gray, ranging from black to white. As part of a specific color, combined with a saturated hue, it creates different tints and shades. Video editing programs use several terms to express luminance. Expressed by itself, luminance is a general reference to the overall luminance values. Different applications breakdown threshold ranges of luminance. The more common terms are shadows, mids, and highlights. Itâs easiest to think of these in general ranges with variable tolerances, where each tolerance responsible for a specific range of the luminance. Other terms that are used and mean generally the same thing are pedestal, gamma, and gain, as well as lows, mids, and highs.

Color grading is accomplished by manipulating an imageâs RGB channels. This can be difficult because adjusting one color channel affects the other two, so dialing in to a particular hue can be frustrating. Thereâs also the need to target specific ranges of values as opposed to changing the entirety of a clip. This is why there are different tools built for color grading. Many of these tools have common elements. Regardless of the software, these tools work the same way.

The HSB color selector allows the editor to choose color based on Hue, Saturation, and Brightness. Each of these is represented numerically with the hue being measured in degrees, zero to 360. Saturation and brightness are measured by a percentage of zero to 100. There are two visual fields of an HSB color selector, a gradated tile and a bar representing the color spectrum. The bar has a slider that selects the hue. As the slider moves along the bar, the hue is reflected in the tile. The tile is often a box that is a composite of the saturation and the brightness values. If thereâs a set of paired axes, the horizontal axis is generally saturation and the vertical axis represents brightness. A target style cursor may be used to select the saturation and brightness on the tile.

Curves can be confusing to a first-time user. The reason being, an unadjusted curve appears as a diagonal line climbing across a graph. This line represents the input levels of an image in relation to its output levels. The horizontal axis of the graph represents the input values of the source clip. The graph increases from darkest to brightest. The vertical axis, represents the output value of the resultant image from the curves, it increases the output value from bottom to top. The line across the graph, the curve, is the point corresponding to the input and output of each channelâs value. By default, the initial curve is a linear relationship, the output equals the input. For example, if the input luminance is 50, the default curve (the straight line), will have an output of 50. The output values change as the curve is adjusted. An editor is able to adjust specific ranges of color and luminance in a clip by carefully placing points along the curve. So if the editor wants to change that 50 luminance input into 60 luminance output, the curve would look like an arc, as the values in the middle are moved upward, effectively brightening the mids (luminance values) near 50.

All these tools and terms are basic, but they allow an editor to wield a great power, the ability to perform selective color grading. Much like chromakeying, an editor is able to target specific ranges of color and luminance to make adjustments to portions of the image. They are able to stretch and compress the dynamic range of the image, shift hues, and tint clips. This allows the editor to make aesthetic choices that are decided upon in post-production and create looks that contribute to the overall video.

The pigments are pixels and the brushes are digital when painting the video canvas. Color grading is an art form. It has the power to change the meaning of video, it helps shape and express the content it surrounds. An editor is able to harness the power of color grading with an understanding its technical fundamentals and the aesthetic impact of color.

Color correction and color grading are often misinterpreted and one process is mistaken for the other. While they do share some of the same tools and processes, they are different. Many of the differences lie within their individual purpose.

Color correction alters footage to a consistent technical standard of appearance. The goal is to match the recorded image with a standard that is an accurate portrayal of the subject as it would be viewed from the human eye. It is performed on shots individually but is used to conform multiple shots to the same quality. This is a tricky task when dealing with footage that was shot using multiple cameras.

Color grading is the process of altering an image for aesthetic and communicative purposes. The colorist creates a look and a feel to further the purpose of a shot.