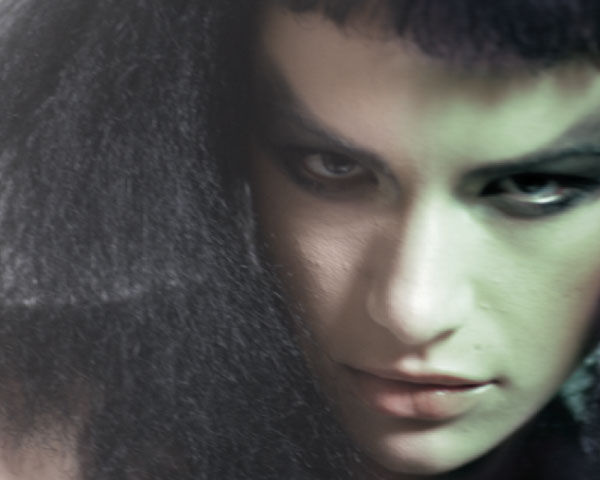 Ever want to give your video a signature stylized look? Just like Jerry Bruckheimer (the name behind the CSI show), Michael Mann (Heat), and Michael Bay (Transformers, Armageddon) you too can come up with your own signature style to leave an indelible mark on your video market. But how is it done?

Let’s take CSI. The editors use high contrast and tint to make you feel a bit more like you’re in the environment. Using color theory in its most literal form, you too could mimic the CSI look. It’s actually pretty simple. If we’re in the desert, we tint warm and dry (yellowish-orange.) In a lab? Slightly blue for medical, and a bit more aqua for technology – sounds simple, and it can be if you follow just a few simple principles to create your own look. 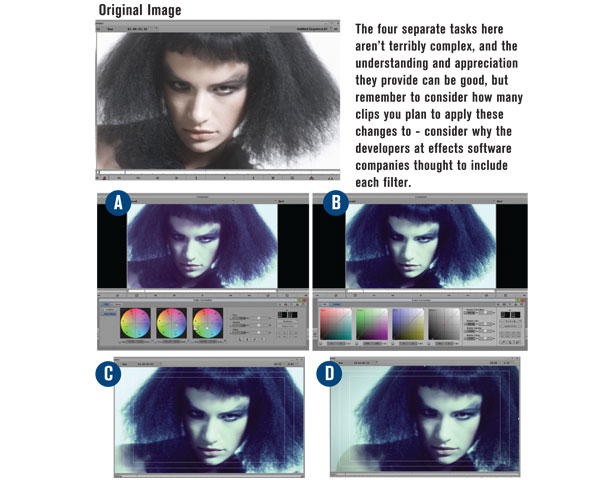 I’m sure you’ve heard it before from the purists out there. Those packaged plug-ins, provided by Tiffen, Boris FX, Digieffects, etc. you can create all those effects yourself without the packages. And some people may even scoff at the thought of using them.

Let’s use a quote from a friend of mine, Fon Davis (model making and visual effects guru, The Matrix Reloaded to the Brisk Iced Tea advertisements.) “It’s not a matter of how much attention to detail you have and painfully executed patiently over a year of building something. That’s amateur. A professional thinks about what he can do to get it done in two weeks. There is no such thing as cheating.” And to that, I whole-heartedly agree. 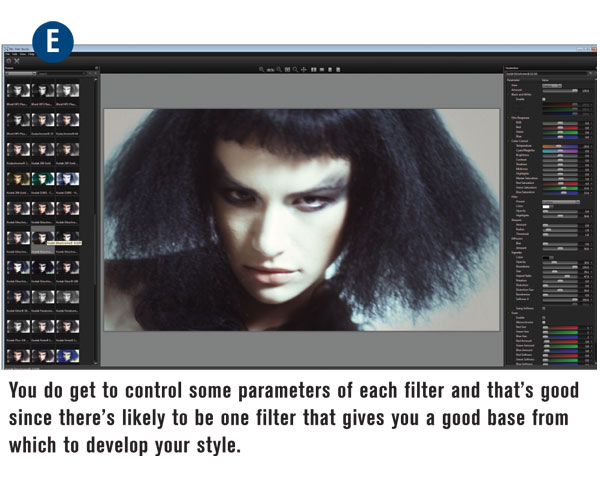 So, wherever and whenever you can make the computer do something for you… it’s not cheating. It frees you up to make it look even cooler. That’s how the look of visual entertainment evolves. For example… you could mimic the look of some film stock by piling up effects like these: add a tint effect to change your mid-tones to a bit blue, your lows to a slight purple, and your highlights a touch of green as in Picture A. Then, add another color pass with which you crush your blacks, and tint the green channel a bit more green and less magenta. (Picture B.) Add a little bit of a horizontal blur (Picture C.), and then a black layer with a feathered and highly blurred elliptical mask cut out of the center with only 25 percent opacity (Picture D.) That will give you a look similar to Ektachrome film. Confusing? That’s a lot of effects and a lot of fiddling around. Or, you could just use the Tiffen DFX film stocks plug-in with the setting for Ektachrome as shown in Picture E, and you’re set. That’s a major time saver. 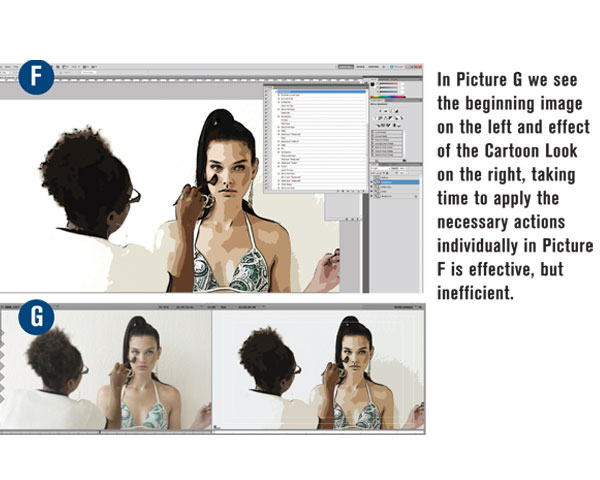 That was a simple example. The steps can get much more complex. For example, if you want to do the Charles Schwab cartoon look, your best option to do it manually is export an image sequence, use an action in Adobe Photoshop, (Picture F) to run through every frame using the automate feature (the action takes no less than 25 steps), and import the image sequence back to your editing software (Picture G.) The round trip can take hours and hours just to see it in motion. Or, you could use the Boris FX’s BCC Cartoon Look filter and be done with it. Needless to say… your “cheating” just saved you immense amounts of time. 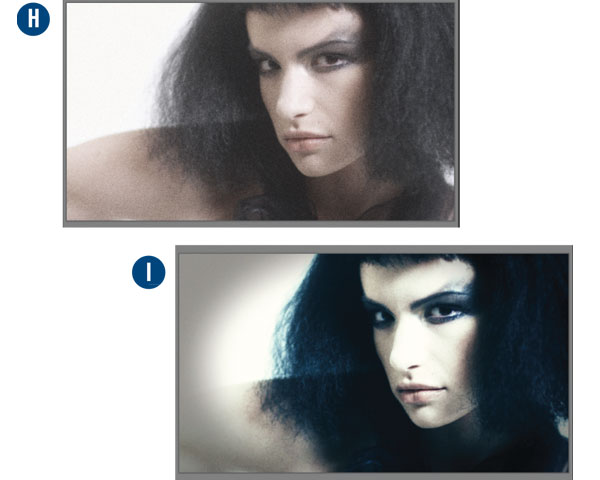 Great, so you get stuff done faster. Other than stacking all those effects mentioned above, what happens if you stack suite effects in the same way? That’s really where you can define your own style.

This example is pretty extreme, but you’ll get the point. Say that you have a client who wants a crazy film stock look with just a bit of film damage, and the client wants it to look like there’s petroleum jelly on the lens (an old effect from the 1970s and 80s that would smooth out wrinkles on people’s faces. It was often used to make subjects look more attractive or to add a bit of glamour to a shot.) 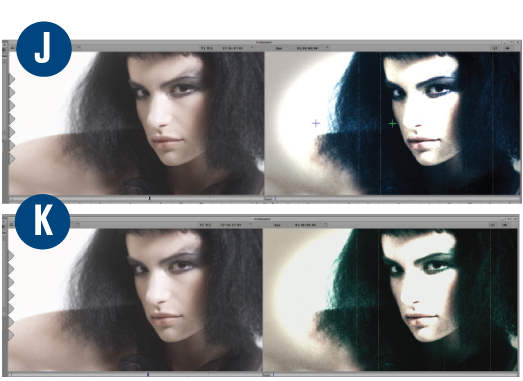 First things first, let’s add some grit. Using the Tiffen Dfx software, we add a ton of grain (Picture H.) Next, let’s figure out a film stock. So, again to Tiffen, we use the film stock effect from earlier, but this time we’ll use Agfa CT Precisa 100, (Picture I) (the film stock list is long. Kodak, Fuji, Agfa… there are tons of presets in here.) Scooting on to our first layer of film damage. Let’s use Boris this time. Using BCC Film Damage, you can add everything from a little bit of dust up through shake, dirt, scratches, and hair. Since we’re into saving time, let’s use the preset of SevereScratchesShakeDesaturate, (Picture J.)

Already things are looking… interesting, but we’re not done yet. Moving on to GenArts, we use Sapphire Technicolor, (Picture K) and it tweaks it just a hair to tone it down before our final touch (the petroleum jelly.) 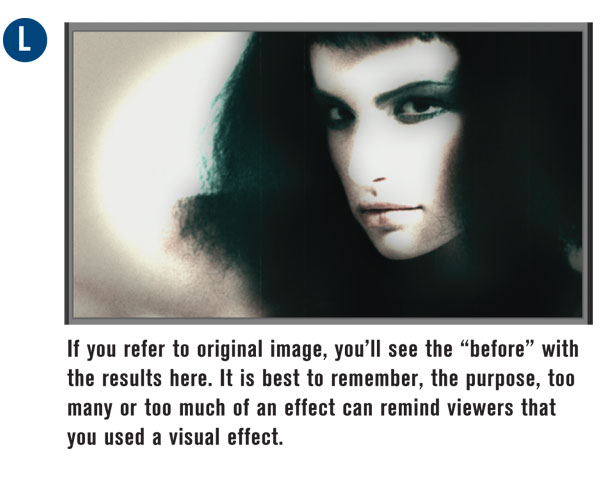 By going back to Tiffen Dfx and using its Glow Darks filter, (Picture L) on its most extreme preset, we tweak our colors to crush the blacks, and blur everything dark just a hair. And we’ve done everything our client requested in just a sliver of time. This… is the evolution of visual style.

Purpose – everything you do needs to have purpose. Never make a story around your effect, add your effect around your story. In our example, we have an ethereal techno-goddess meets Lady Gaga. So, gritty, artsy, and out there are completely called for. We wouldn’t use this set of effects on Gone with the Wind.

Color: Nothing can make you feel like you’re in the story more than color. But use it with care. It simply wouldn’t do to tint a desert blue (unless you’re on a different planet maybe,) nor to tint the arctic orange. Even changing your saturation levels one way or the other can give you interesting results.

Media Damage: video, film and even digital compression can all show damage. Using vignetting, grain, scratches, interlacing, or even digital artifacting can really add to the feel of your clips. Of course, going overboard can make your clients wince too.

The Evolution of Visual Style: it’s all about the possibilities. As these techniques become easier to do, people think of more and more unique ways of combining the possibilities to create new ones. That’s what it’s really all about. Not purism vs. cheating. Embrace simpler ways of doing things, and combine them with the free time it affords you. That’s the core of how you’ll come up with new and interesting looks to define your style.

The bottom line? An investment in an effects suite is essential when honing your own style, or giving a client that “Jerry Bruckheimer” effect. It’s an investment that will save you countless hours! 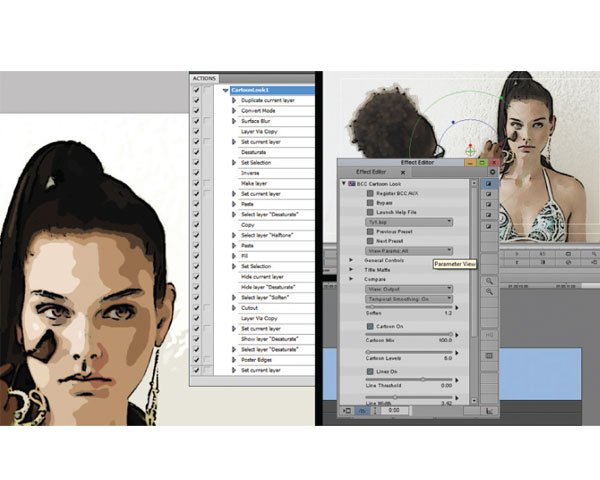 Purist Style vs. Suite Style
On the left, we see the steps necessary to create a cartoon look frame by frame using an automation tool from Adobe Photoshop. On the right, a simple preset using the BCC Cartoon Look. The time savings? Thirty-five minutes to create the action and process the footage through Photoshop, and another three minutes to import it back to Avid Media Composer. With BCC Cartoon Look, we spent 15 seconds to find the effect in our bin, another five seconds to select our preset, and three minutes to render the effect for real-time playback. All of this for 11.5 seconds of video. How much is your time worth?