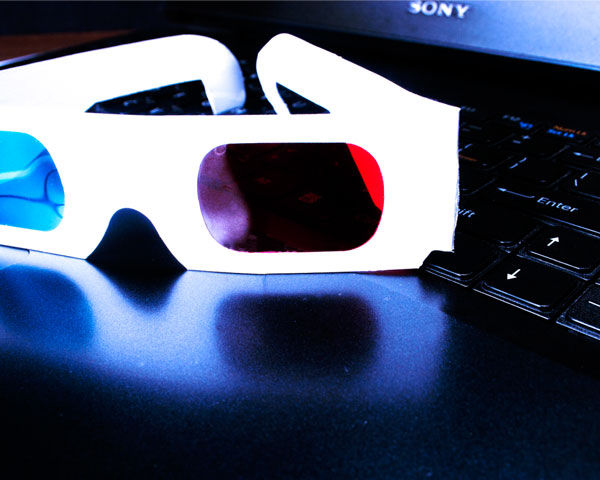 We are looking at the world very differently now that we have entered the era of 3D storytelling in the cinema and on home TVs. Solutions for 3D editing are just hitting the prosumer markets. In fact, many manufacturers of editing programs have announced 3D stereoscopic support in their software. It’s time to look at what’s in store for us as editors of 3D video.

Many of us by now have probably had the pleasure of viewing a 3D movie at the theater. It seems that Hollywood is throwing a lot of support behind this technology, most likely as another way to bring more excitement into the theaters, and hopefully more warm bodies. The 3D cinema may be a great driver for ticket sales, but what does it mean for us, the independent video producer?

The truth is, we have a long way to go before many of our clients start requesting 3D productions. Since the big HD broadcast transition encouraged many consumers to buy new HDTVs, and the recession has pretty much kept most families from making another big purchase on television technology, the 3D television adoption rate is slow at best. We’re not expecting much demand from the consumer market for 3D content.

The 3D video market is not dead however. There are a lot of use cases where 3D video is superior. If you work with clients in technical fields, 3D video can be a great enhancement by adding that extra dimension of depth. For example, a manufacturer of medical equipment might want a training video done in 3D so that they can train their technicians more accurately. Overall, these applications seem somewhat limited for many of us as producers, but there’s no reason not to be prepared. At the very least, we can start by looking at what we’ll need to make 3D video.

3D Video Is Twice As Demanding 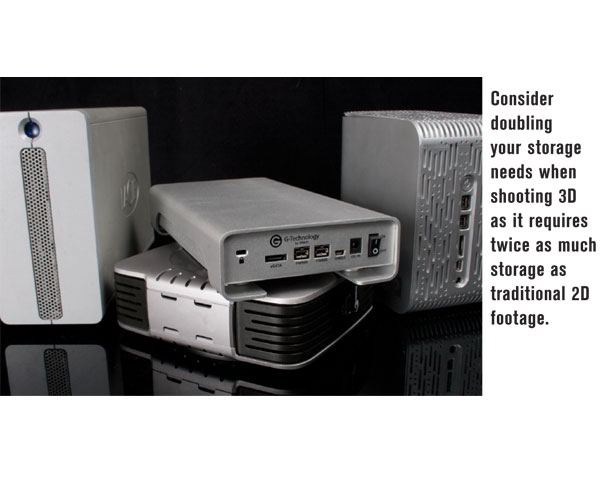 Who would have thought that adding one extra dimension to video would double the storage requirement, but that is in fact what is happening for 3D video editors. The reason is that many 3D video shooters are using two cameras to capture their 3D video and the result is that you need twice as much storage. As 3D video acquisition matures, we might see some solutions that share a single video signal by splitting the scan lines or frames or some other innovation. As for right now, though, two cameras are most common and even the nicer professional options, like the Panasonic AG-3DA1 record right eye and left eye signals on separate media. Keep that in mind since this means you will need more storage space per minute of video than you originally planned when putting together your editing suite. Throughput will also be a concern as your computer will need to read from two files to build the single 3D video signal. So, large and fast drives are once again a priority for video editors with this new medium. Because of this, we recommend looking into RAID configurations, which give you plenty of throughput and storage capacity.

You’ll also need to consider how you’ll preview your 3D video during the editing process. There are several ways you can do this. The least expensive alternative is to use color-filtered glasses. In this method, you’ll change your playback settings so that the right and left eye video signals are separated into different color channels to produce an anaglyph image. Then you put on your color-filtered glasses to separate the two video streams to each eye. The end result is 3D video, yet this method is not as compelling as some other technologies because the color of the video is distorted. While it technically works, it’s not the most accurate way to edit 3D video.

A much better interface is one that allows you to view the video in all it’s wonderful and accurate color. There’s NVIDIA 3D Vision Pro, which is a professional 3D solution that combines a compatible NVIDIA graphics card and a compatible LCD with a pair of active glasses. This solution allows you to preview 3D video right on your LCD monitor. This is an ideal solution for editors. Unfortunately, it’s only available for Windows and Linux.

Another hardware consideration is a 3D television to act as an additional 3D monitor. It’s not mandatory, but it’s a worthwhile investment if you’re serious about your 3D video productions. These 3D TVs are really the best way to test your work against the same type of televisions your clients will likely use to view their content. It’s important to have this viewing experience and be able to identify parts of your production that are not quite optimal. For the most part, 3D video is great, but if you push the boundaries too much, you could force a headache on your viewers. The best way to check your work is against your own eyeballs on a consumer level 3D television. And, it’s another great excuse to upgrade to a 52″ 3DTV.

Of course, all this hardware is useless without the proper software. The necessary software will build your 3D signal so that you can actually view the 3D on whatever hardware you have in your suite. 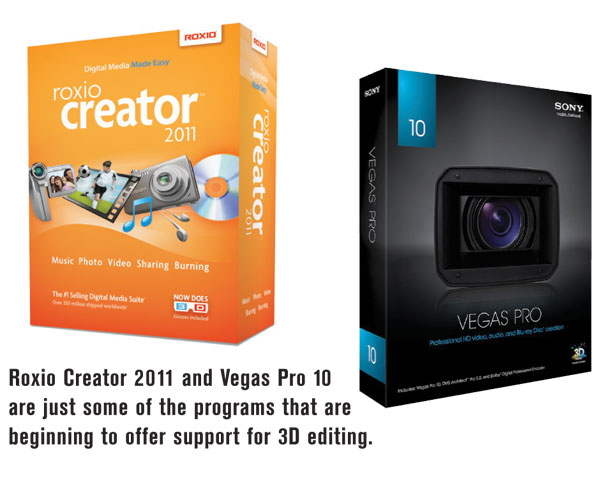 On the software side, solutions are maturing, as seen with Sony Vegas 10 software which allows the editor to handle the input and output of 3D video right within Sony Vegas.

Adobe’s Premiere CS5 and Apple’s Final Cut also have 3D editing capabilities, but only with the support from an additional plug-in – Cineform’s Neo3D. Neo3D is an impressive solution, which is what you’d expect from a $2,995 plug-in. If you’d like to dabble, you can get a 15-day free trial. For the rest of us, we’ll be in a holding pattern until prices go down.

While we wait to jump head first into 3D video editing, we can start discussing the basic principles and get a better idea of what this extra dimension will require of us as editors. First and foremost, we need to make sure we tighten up our media management.

Editors will need to keep track of two video files, a right eye and left eye video file for each 3D video signal. Make sure you don’t slack off on your media labeling. When you import files to your media drives, get in the habit of renaming files as right and left eyes. Otherwise, you might get into your editor and end up getting cross-eyed. 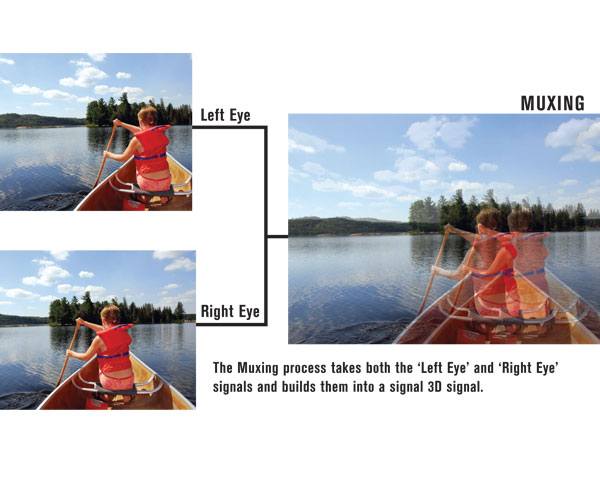 With your media squared away, you’re next duty is to make sure you sync your right and left eye pairs together. As many early 3D shooters are using two independent cameras for acquisition, you must sync each right and left eye video file together. Professional cameras, like the Panasonic AG-3DA1 will automatically write each file in sync, meaning you can bypass this process.

Frame syncing can be a nightmare and very time consuming if your shooter hasn’t marked each shot with a clapboard or by some other method. You may be familiar with similar process, trying to sync up two different video clips to sync the audio. It’s the same philosophy, only this time we have to do it before we can make the single 3D signal. Once we have frame sync for both left and right eyes, it’s time to multi-plex (mux) the clips.

Muxing is the process of joining together the two right and left eye files to build a single 3D signal. You won’t actually be compressing a new video file, but rather creating a new file that acts as a shell and refers to the two independent, frame-synchronized, right and left eye video files. In this way, your video editing software can then impose whatever 3D playback technology you’d like, whether it’s anaglyph images or a stereoscopic signal sent to different scan lines (requiring active glasses).

Editing with Your Good Eye

Once you’ve muxed all your clips, you can review your work to make sure you’ve successfully synced your files, but ultimately, you’re going to do most your editing work in 2D. Trimming and building your rough edit can all happen with just the left eye signal. There’s really no reason that you’d need to be seeing the source footage in 3D at this point. It seems rather disappointing having all this fancy equipment and no use for it, but that’s the best way to get the job done when trimming clips and build the basic edit. Only when you start adding graphics and titles does it become absolutely necessary to put on the glasses and make sure your graphic elements or titles are in the proper position in the third dimension.

As you near completion of your edit, you’ll need to review more often in 3D to check your work. At this point it’s a good idea to test out the end user experience. If your content will make it to the end user on 3D television, here’s where that new 3D television comes in handy. Or, if you’re releasing to the web, make sure to create a test file and review your work. You will find that titles and graphics can’t be pushed too far or they become difficult to read.

With demand for 3D content from your clients being extremely low at best, and the professional technological solutions being young (and in many cases, expensive), 3D video editing has a long way to go before most of us jump in. It’s not too soon, however, to start to dabble with more guerilla style techniques just to get your feet wet. When the time does come, expect to make a sizable investment, just like when we all made the transition to shooting and editing in HD. Start prioritizing your equipment list now. Faster processors, more RAM, 3D monitors and RAID hard drives are all critical to making a decent 3D workstation. If you can chip away at any of these things, you’ll be one step closer to making professional 3D video.