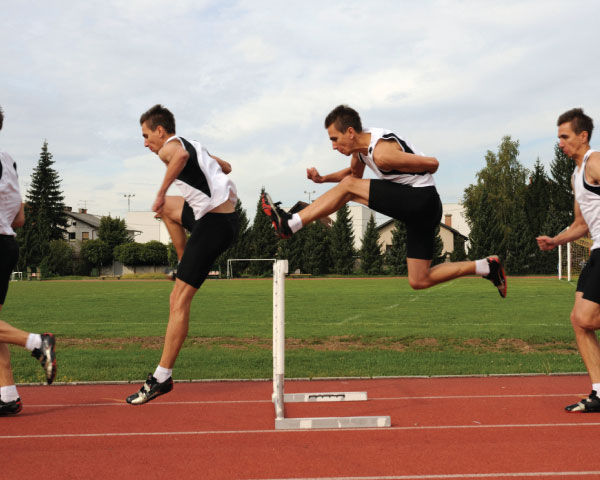 Slo-mo use can be incredibly dramatic and add emphasis where needed in a story. Let’s take a look at what slow motion is and discuss some common uses for slow motion.

Slow motion is when the playback of a video clip appears to be slower than the natural speed of the events. This illusion can be done in several ways. In the early days of filmmaking, the technique for doing slow motion effects was to overcrank the camera speed. This meant that the camera operator would increase the frame rate (frames per second or fps) by cranking faster to acquire more frames in the same amount of time. Then, the footage would be played back at the normal playback speed, producing the illusion that events are happening at a slower speed than what is natural. (We’ll explore this technique a little further in a second.)

Later, along came digital video editing, which allowed an editor to slow the playback of a clip down with a click of the button, regardless of the frame rate. How amazing! Rather than acquire additional frames, you could simply tell your editing software what percent of the normal playback speed you’d like and voilà! – instant slow motion. The editing software would quickly duplicate additional frames, depending on how slow you wanted your footage to be, and place them into the video. The end result was nearly the same: more frames to be played back. We say “nearly” because the older technique of overcranking produces more natural-looking images, because frames are not duplicated digitally. In most cases, overcranking is a superior technique because it doesn’t diminish the quality. 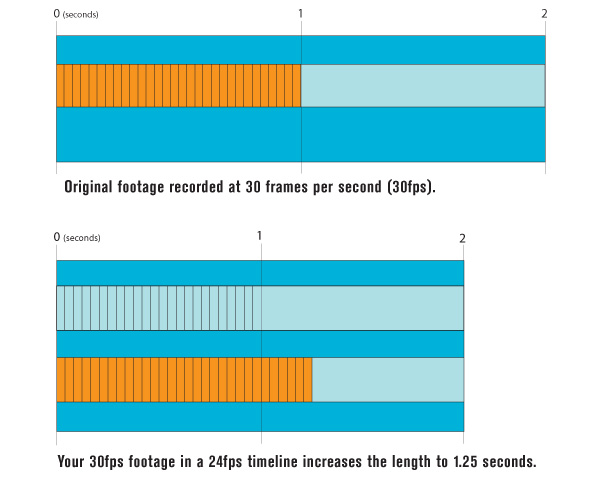 Let’s use a fairly typical example to explore this overcranking technique further. Many digital video cameras can capture at different frame rates. For example, you may have the option to select from 24fps (frames per second), 30fps and even 60fps.

We’ll pretend that we’re shooting at 30fps, a very common frame rate. Let’s say you’re at a track meet, and you capture 10 seconds of footage from a 100-meter dash. At 30fps, that’s 10 seconds multiplied by 30 frames per second, which adds up to 300 total frames. If you play back that footage on your camcorder, you see those 300 frames over the 10 seconds, which will produce sprinters racing to the finish line at a normal-looking rate of speed. But, if you were to take your 30fps footage and create a timeline in your editing software with a playback speed of 24fps, things would look a bit different. If we look at one second of frames in our timeline as 24 buckets, we’d see that footage (at 30fps) would fill up all the buckets, and we’d have six frames remaining afterwards.

What do we do with these extra frames? Throw them away? Nope. They continue onto the next second of video playback, so that our 30fps experience is stretched across one second and six frames, for a total of 1-1/4 seconds (six remaining frames divided by 24 playback frames). Our 30fps footage plays back more slowly in the 24fps timeline. In fact, it is 80% of the original speed (24 playback frames divided by 30 captured frames). This is a common technique, and most professional videographers capture their footage at 60fps and play back at 24, which is 40% of the original speed. This speed happens to make for a very smooth and dramatic slow motion.

You might be thinking now that you should shoot at 60fps all the time (just in case). Well, the truth is that this is not such a great idea. First of all, if you choose to shoot everything in 60fps, you’ll need to play back all your normal speed in a 60fps timeline. And, for narrative stories, the 24fps acquisition and playback speed has a better-looking cadence. The best use of this technique is to plan ahead. After all, this is filmmaking, and scripting is just as important as the technical side of video editing.

Effective Use of Slow Motion 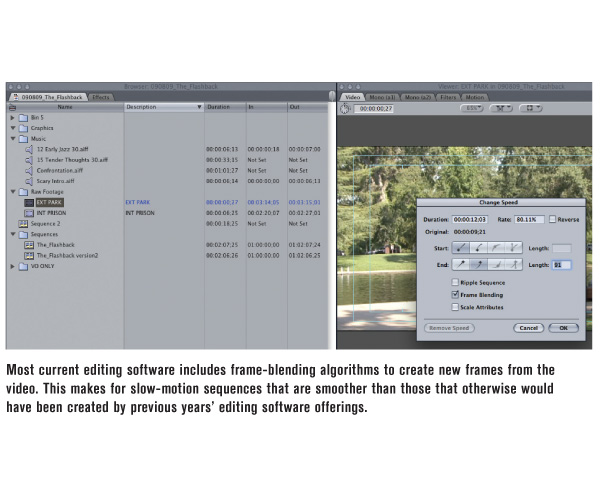 Like all special effects in video, you have to delicately use these tools to tell your story without drawing attention to the movie magic itself. Slow motion can be very powerful and subtly hidden to the viewer when the timing is just right. Timing is everything, and slow motion can be used to build anticipation for an event that is unfolding before the viewer. Let’s see if we can get the audience on the edge of their seats.

In this example, there will be a villain in your story, and in the first act you want to set up this character to clearly be the antagonist – and preferably, a very mean one. The protagonist is a hard-nosed schoolteacher who enjoys sucking the joy out of being a kid. In the back of the class is a student who is going to be our sacrificial lamb. This student is going to pass a note to the student next to him. We show the student writing the note, anxiously looking up to see if the teacher is watching. Then we see the student fold up the paper. He checks to see if the teacher is looking. She’s not. We see the teacher writing on the chalkboard, then we cut back to the student. The student reaches across. We slow the playback speed down – way down – so the process is drawn out. The audience is anticipating the inevitable – which is the very next shot. You may hold this slow motion shot up to three to four seconds before whipping back to normal speed and the voice of the teacher admonishing the student. Busted! Slow motion is a great tool for drawing out a moment and building suspense.

You may also use slow motion to allow the viewer to get a better view of the details, just like a good close-up shot. Let’s say we’ve reached the climax of our movie, and the protagonist, a strong-willed little girl at the end of the Spelling Bee, is up against a bratty sixth-grade spelling veteran. That, and the evil teacher is a sitting judge who just so happens to be aiding the competitor. The sixth grader chokes on a especially difficult word, and our protagonist has a chance to take the win. Of course, we slow the pacing down to a lull. Shots are running five to six seconds. It’s taking about the same time per letter to spell the word out. Eventually, the protagonist spells the word correctly, the judging panel approves and the crowd erupts. We slow the playback speed down as the little girl is adorned with her medal and she gleefully grins ear to ear. Her classmates pick her up onto their shoulders. We see her cheerful face once more in slow motion, taking in the raw emotion of the event, perhaps something that occurred in a split second but seems to have a much greater lasting impression when slowed down. Slow motion can emphasize an emotional moment, whether it be joy, sadness, a fit of rage or boredom (a slow motion clicking clock).

No Overcrank, No Problem 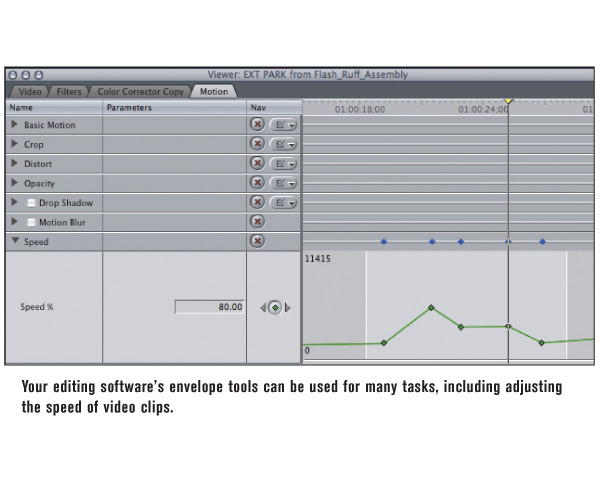 While overcranking provides superior-quality slow motion, not everyone has a camera that will shoot multiple frame rates. Nor do they have editing software that will allow them to set the playback speed of the timeline. However, most editing software, if not all, have a playback speed option that will allow you to slow down clips, and some have new technologies that intelligently build additional frames that are better than mere duplicates. For example, Final Cut Pro uses “frame-blending” technologies that make the more natural and smooth slow motion you’d expect from overcranking.

You may also want to look into using envelope tools that change the playback speed over time. This way you can start a clip at normal speed and ramp it down over a few seconds to a slower speed, then ramp it back up to normal speed. This technique is reserved for the higher-end applications like Apple Final Cut Pro and Adobe Premiere.

No matter what tools you put to use, make sure you think critically about your story, and identify the key moments and emotions that you want to emphasize. Doing this at the right time will put an exclamation point on these moments.