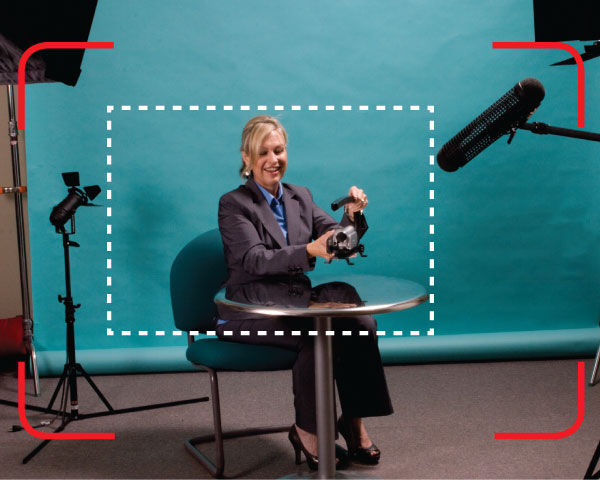 Although we don’t like to admit it, sometimes we don’t pay attention to our picture when we’re shooting as closely as we should. As a result, we’ll find things along the edges of our screen that are not supposed to be there. The most common offender is the tip of a shotgun mic that has dipped into the shot from above. We also might see the edge of a light stand, a barndoor or many other pieces of equipment. Of course, this immediately destroys the illusion and the viewer is made aware of the Oz behind the curtain.

A simple cure exists in the editing room, which has saved producers a great deal of time and money. Let’s say one of our shots is victimized by a sagging shotgun mic that has entered the top of the video frame. If we’re lucky, it appears only briefly, and it drops only slightly into frame. Anything more and we wouldn’t be able to do this trick (but we would likely have caught it during the shoot).

Most video-editing applications allow you to resize your video clips. You can almost certainly find these controls in professional applications, such as Adobe Premiere Pro, Final Cut Pro, Sony Vegas Pro, etc. Resizing a video clip allows you to increase or decrease the video size. It’s one of the many ways to do the picture-in-picture (PIP) effect. But, in this scenario, we will actually increase the video clip’s size to display at about 105% of its original size. Depending on how far down the mic dips into the frame, we may need to increase the size. However, if you go too big, the video quality will degrade, and you’ll start to see a good deal of pixelation. With the video clip size at 105%, we can also reposition the clip so that the bottom edge is flush with the bottom of the video canvas. This leaves a good solid horizontal edge of the video clip at the top that is hidden from the viewer. The offending shotgun mic has now been neutralized with a simple increase in size and nudge upward. 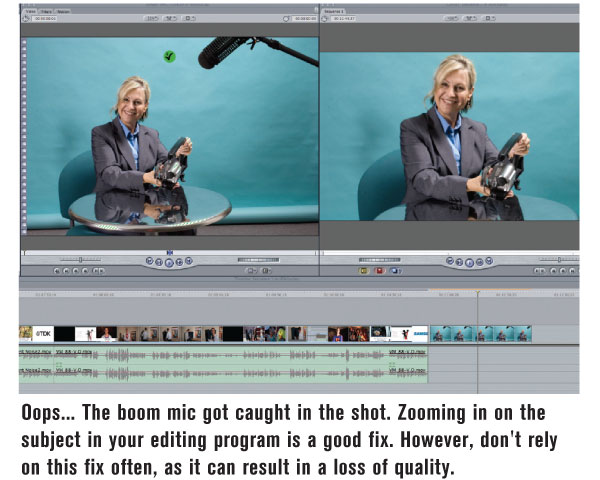 Fixing boo-boos is not always the focus for the editor. On some projects, that be might all you’re charged to do, but other projects need an artist’s touch. Using the same technique, we can enhance shot composition. Let’s take, for an example, two shots that we’d like to nicely juxtapose in a cross dissolve. In the first shot, we have a hang glider flying in a great big blue sky. In the second shot, we’ll cross dissolve to an eagle soaring in the sky, just like the hang glider. Naturally, the transition from one to the other makes sense. But the two shots don’t fit nicely together for the cross dissolve. The hang glider is composed on the left side of the screen at the end of this clip, and the eagle is composed mostly on the right side of the screen (although the shot is somewhat shaky, and the eagle moves throughout different parts of the screen). Ideally, we’d like to get the objects in the same position on the screen as we make the transition. The trick is to find the perfect time or to use the nudge trick.

First, let’s try to get lucky and find a possible split second to match the glider (screen left) with the eagle (screen unpredictable). We’ll play back the glider clip until we reach the last 30 frames, or the starting point for the cross dissolve transition. We’ll mark the front tip of the glider with the corner of a Sticky Note. Using a Sticky Note won’t leave any gunk on the screen of our monitor. Now, we’ll move to the clip of the eagle. Play back the clip, and look to see if the position of the eagle’s head ever reaches the Sticky Note. Odds are you’ll find the moment; however, it might not remain in that position for more than a frame or two. For this transition, it will look best if we can get the eagle into position for at least 15 frames (half a second).

Stitch it Up with Some Keyframes 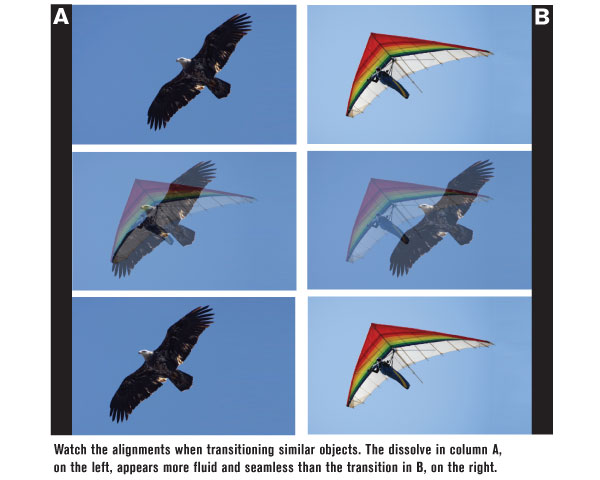 Most professional editing applications will allow you to take your nudging to the next level by animating the video clip’s position over time. This technique can be used to keep an object moving from one side of the screen to the other in a stationary position. As in the previous example, you’ll need to increase the video clip size to give you some room to move the clip from one side to the other. Then you’ll nudge the clip so that the vertical edge on the right side is flush with the right-side edge of the video canvas. This makes the object – remember the eagle from the previous example – move towards the left, once again closer to the hang glider. You’ll then create a keyframe at the beginning of the video clip which tells the video-editing application that this is the starting position for the video clip. Move the keyframe editor a few seconds down the clip, and now nudge the video clip back towards the center position. Enter a keyframe, noting that this is the video clip’s ending position. When you play back the footage, the video clip moves from right to left, but the viewers never see the change. To them it looks like the camera has panned. More importantly, we keep the eagle closer to the middle of the screen for a good three seconds, providing us plenty of

time to make the smooth transition to the hang glider clip.

You can use the technique of resizing and moving the position of a video clip to do much more than fix a boo-boo or hold a shot steady. If you regularly import still photos into your project, you can use the same technique to pan and scan across images. You can also use this strategy with more violent changes to simulate a bump in the road or a 6.0 earthquake. Finally, you can also animate your movie titles to zip and zoom in and out of the screen in any which way you like. As you get more comfortable with this technique, you may want to look into more advanced video compositing software, such as Adobe After Effects and Apple Motion. These software tools have many more options for moving clips, photos and graphics across your screen. Just make sure you chalk out some time. Keyframing can be a great way to move these objects through simulated 3D space, but it also can be a huge time suck.