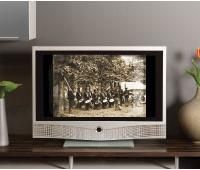 Dropping a still photo in your video isn’t too hard, but making it flow well takes a special eye. Adding movement to stills is a technique that the masters have perfected.

Movies, film, cinema, video – these are all, more or less, names for the same thing: motion pictures. But here is a riddle: when is a motion picture motionless? Answer: when it is made of up of stills. Ok, wait, I sense I’m confusing my readers. Aren’t film and video just a progression of stills like a flip book? Yes. Let me clarify: we are about to explore the use of stills in our videos. Not a slide show, but actually incorporating stills in our motion picture.

You’ve seen stills used in motion pictures far more than you may be aware of. From Hollywood films such as Snatch (Ritchie, 2000) to The Good, the Bad and the Ugly (Leone, 1966) and back to the present with Juno (Reitman, 2007), stills have had an important role in setting the mood for the film and for introducing the main characters in the plot.

Many documentaries would not even exist if it weren’t for stills. The still photo has been around since 1826, whereas the motion-picture camera came onto the scene some time after Eadweard Muybridge’s 1878 experiments with a horse and trip-wire photography. So what if you wanted to make a documentary on the American Civil War, which took place between 1861 and 1865? There are no home movies from that time, and no one is alive from that period to interview, but there are plenty of still photographs around. More on the Civil War later.

Although using stills in motion pictures is not a new technique, it is easier than ever, (see our Tutorial: Perfecting the Pan-and-Scan Effect, in this issue by Paul Del Vecchio). Ken Burns, the monarch of motionless moving pictures and someone we will talk about in a bit, credits the 1957 National Film Board of Canada documentary City of Gold (Colin Low and Wolf Koenig) as his inspiration. But Low and Koenig did not have simple-to-use software on their personal computers like we do to make this magic happen. They used a clunky machine called a rostrum camera to add motion to their photos.

The rostrum camera is a film or video camera mounted on a vertical arm, its lens pointed straight down onto a platform below. You place a still photo on this platform. You can move the camera up or down, and you can move the table right or left, forward or backward or rotate it in a circular motion. Like many tools of old, this process is time-intensive.

The Master of Still Motion Pictures

I’ve alluded twice to a documentary about the Civil War and the man who made it, Ken Lauren Burns (born in Brooklyn, NY, 1953). No conversation about stills in a motion picture would be complete without mentioning this documentary that has been seen by over 40 million people and has won over 40 major motion picture and television awards, including two Emmies, two Grammies, the Producer of the Year Award from the Producers Guild of America, the People’s Choice Award and the Peabody Award, to name just a few. The Civil War (1990) is a nine-part series comprised almost entirely of still photos with voiceover. Burns used the rostrum camera to pan across or zoom into or out of thousands of still photos. Other films of note from this prince of PBS documentaries are the Academy Award-nominated Brooklyn Bridge (1982) and The Statue of Liberty (1986), as well as his Baseball (1994), Jazz (2001) and The War (2007) docs.

Even if you have not seen any of these films, chances are Mr. Burns has affected your life. Apple, Inc. helped put his name into common vernacular when they coined the phrase, the “Ken Burns Effect” with the release of iPhoto and iMovie software applications. But Steve Jobs, Apple’s CEO, didn’t stop there. With the release of the sixth-generation iPod, the omnipresent players of MP3s incorporated the “Ken Burns Effect” by animating album art in its video interface.

But I digress. Back to motion pictures. The use of stills in documentaries is obvious, not just for subjects that occurred between the invention of still photography and the introduction of the motion-picture camera, but also for bringing back more contemporary history where a film or video camera was not present. Some of my students recently made a documentary on Mother’s Day as it relates to elderly women living alone in retirement homes. The filmmakers asked each woman they interviewed for stills from their youth and of their family/relatives to fill out the stories (and they returned each and every photograph after scanning them!). They did this for the same reason that Ken Burns continues to use the “Burns Effect” today with documentaries such as Baseball and Jazz, because moving images via film or video is not always available.

The use of stills is not confined to documentary disciplines, however. Many contemporary narrative works use stills, from comedies such as Monty Python and the Holy Grail (Terry Gilliam and Terry Jones, 1975) to dramas like the gangster/heist hit Snatch. Gilliam animated simple paper doll-like cutouts of well-known figures such as the Christian god, against an illustrated still background in short interstitials throughout Holy Grail, as well as in other Monty Python films. The technique is very similar to that used in the animated series South Park (Trey Parker and Matt Stone).

Sergio Leone used stills in his opening credits for the 1966 classic The Good, the Bad and the Ugly, starring Clint Eastwood. These credits are still admired today and can be found on this excellent website.

Guy Ritchie updated Leone’s technique while introducing the main characters of his masterpiece Snatch with Brad Pitt. In the brief music-video-like sequence, he shows each major player in the film in a short, character-exposing montage. At an opportune moment in each clip, the action freezes, whip-zooms in a bit and turns monochromatic while the character’s name appears. This holds just long enough for the viewer to read, and the still effect reverses and transitions back into the short clip. At the time of writing this article, you could find a clip of this on YouTube by searching “Intro from Snatch.”

Yet another excellent example is the opening credits of Juno. The action transitions from live-action footage of the main character Juno walking down a sidewalk, with the camera tracking alongside from the street. At one point, she passes behind a tree; when she emerges, the image we see is an animation of Juno walking on illustrated still backgrounds of the suburban environment she is walking through.

Finally, one of the best examples of stills used in a motion picture came from one of our readers and winner of our annual video contest. Mark Wickham’s Beijing Golf Classic is a riveting (yes, Wickham somehow made golf riveting) short, in which he separates many layers of a still photo and animates them. The effect comes across as simple, but it is so slick. I have since seen this effect in expensive television advertisements. Check out the video Mark Wickham’s Beijing Golf Classic on the Videomaker website. Mark also wrote one of our recent tutorials on how to do this very technique, Tutorial: 2.5d Animation.

These are just a few examples of the use of still photography in moving pictures. My hope is that I’ve excited your creativity in the use of stills and that we will soon see your motion still contributions, whether as submissions to our annual video contest or maybe in music videos, television commercials or on the big screen of Hollywood.