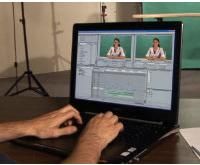 As video producers transition into the 21st century, we have an opportunity that no other filmmakers or mediamakers have had in the past: we can edit on the set.

Even if celluloid film editors of yore dragged their large and bulky Moviola or Steenbeck film-cutting machines onto the set, they would have needed to wait for the lab to develop dailies for them to even begin the post-production process. Now we have high-powered dual-core processor laptops which will let us begin the editing process before the actors remove their makeup.
I’m going to break this topic in two: editing on the set for narrative-type works and on location for documentary-style projects. There is obvious crossover, but each has enough unique situations to warrant the split.

Editing on the Set: Narrative Projects

Narrative projects are Hollywood-style, three-act “stories,” usually with scripts, storyboards and actors. I’m going to include commercials and music videos with this grouping, assuming that the editors shoot in their city/town of residence, for reasons that will soon be obvious.

Whether the project’s Director of Photography (DP) is shooting tape (HDV, DV or Betacam), disc (Sony’s XDCAM HD optical disc or similar) or solid state (Panasonic P2 or similar), he can load footage from the set onto a laptop’s hard drive. So, while the crew is eating lunch, the editor can copy the morning’s footage to a computer and be organizing and editing before the afternoon’s lights, camera and action. Let’s look at a few of the advantages and disadvantages of this process.

Many Hollywood movies of 90 to 120 minutes in length can easily take many months to edit. If it takes three months to shoot a film, editing on set can give an editor a 90-day head start on the post-production process. Commercials and music videos have a much shorter timeline, but they also have much tighter deadlines. No matter what the project, it always seems to be due “yesterday,” so getting a jump-start on the time-intensive editing process is always a plus.

Another advantage could be the editor’s feedback on the shooting of a scene. Many directors may have egos that don’t allow “constructive criticism,” but those who do can greatly benefit from an editor who alerts the auteur of a problem in continuity or a lighting inconsistency, for example. The director can then reshoot the scene before taking apart the set or releasing the actor.

One big disadvantage could be the loss of objectivity, as Walter Murch mentions in a must-read book on the process of editing (see sidebar). If an editor were to get too close to an actor, she/he could let the actor’s personality interfere with the personality of the character that actor is portraying. The same goes for any of the crew members. A bad relationship with the gaffer or Director of Photography, for example, may taint the editor’s objectivity toward the lighting in the film, due to this problem with personalities of crew members.

Editing on the Set: Documentary Projects

Most of the above applies also to documentary-style projects, but documentaries have their own challenges. The above narrative section could apply as well to documentaries made in the editor’s own hometown and with easy-to-access locations. An editor can shoot non-fiction videos in his place of residence, but, for the purposes of this article, let’s assume a documentary is a project that takes its makers away from their own mailing address.

Usually on documentaries, the crew is not building or dismantling sets, but they are moving locations. Ron Fricke shot at 152 locations in 24 countries on six continents for his masterpiece Baraka (Magidson Films, 1992).

To the best of my knowledge, they did not edit “on set” in the late 1980s/early 1990s, when Fricke shot this 70mm work of art. But I always wonder what amazing shots audience members didn’t get to see because the footage didn’t come out the way Fricke and his producer Mark Magidson wanted. If they had been able to shoot on a camera like the Panasonic HVX200, they could have “dumped” the footage from the solid-state P2 card into their laptops and reviewed their footage the very same day it was shot, thus correcting or reshooting while they were still in the same location and giving audiences the full benefit of their vision.

Gear! Shooting a documentary on the road is difficult enough with cameras, tripods, lights and all the other gear needed to “get the shot.” Add to this computers, hard drives, FireWire cables, backup software discs and all the gear needed to edit the video, and you’ll need a lot of mules to get that gear up that narrow Peruvian animal trail in the rain (trust me, I did it)! Not only do you have to carry this gear and make sure you don’t let it get stolen, but you have to properly protect it from nature’s elements and man-made catastrophes, such as ten-hour bumpy bus rides that shake your fillings loose. I lost a 500GB hard drive to a bumpy Bolivian bus ride. Luckily, my Director of Photography had everything backed up for me!

Another disadvantage is an editor’s proximity to trustworthy gear outlets in order to buy or rent equipment that was not anticipated in pre-production or was stolen or damaged. The first time I shot in HD, I grossly miscalculated my hard drive needs. I ordered a bunch of portable hard drives online from B&H in New York for delivery to Buenos Aires, Argentina. The Argentine customs officials not only made it extremely difficult to even get these drives out of their custody, but they slapped an outrageous import tax that doubled the cost of the drives!

On Set or Wait?

After wearing both the director’s beret and editor’s baseball cap, both on and off set for over twenty years, I must say I prefer to either edit on my director’s set (when I’m the editor) or have my editor work on my set when I am directing. I’ve outlined only a few of the advantages and disadvantage when shooting locally or remotely. Each location offers its own challenges.

I would love to hear some of your “stories from the trenches” on this topic of editing on the set. Send your editing-on-set war stories, both positive and nightmares, to editor@videomaker.com with “Editing on the Set for Morgan” in the subject line.

Side Bar:A Word from the Pros

In the book Behind the Seen: How Walter Murch Edited Cold Mountain Using Apple’s Final Cut Pro and What This Means for Cinema, Charles Koppelman had this to say about Walter Murch’s experience while editing on the set near Rome, Italy, for the film The Talented Mr. Ripley (1999):

Murch may meet actors on the set or socially, but he intentionally keeps a certain distance. He will be living with the performers and their characters in his edit room for over a year, and he will wind up knowing their onscreen tics and habits perhaps better than they do. Being outside the typhoon of film production not only safeguards Murch from its gale-force winds of emotion, physical exertion and stress, but it gives him a degree of much-valued objectivity. (New Riders, 2005)