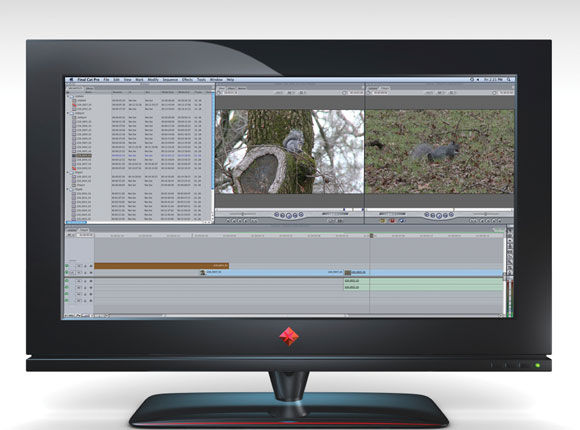 Four of the most dangerous words in the video production lexicon are “fix it in post.” Easy for a director or cinematographer to say, but who is going to feel the pain? The editor and, most probably, the audience. Matty Libatique, the cinematographer of Requiem for a Dream, said, “People should really say, We’ll cheat it in post,’ because I don’t think anything’s ever necessarily fixed’ in post.”

You can fix some things, and others you cannot. Note to production people: “Get it right on the set, and you’ll be much happier with the end results.” But mistakes do happen. Delays plague your production schedule, your talent is getting cranky, the tiny two-and-a-half-inch LCD monitor on your camcorder is difficult to see in the departing light… we’ve all been there. So you, the director and camera person (and very likely sound person, continuity person, makeup person, craft services person and every other person), rushes through the shot list. Later that night, when you are capturing your footage, you see all the problems: the handheld footage is too shaky, the audio is too low, talent was wearing a shirt with thin horizontal stripe that is now dancing all over the screen, etc., etc.

Some filmmakers feel every shot they captured with a camera can be improved in post. A little tweak here, a boost there. We could fill a year’s worth of this magazine with these fixes,’ but we have room for only some of the more common. We encourage you in the Videomaker community to us tips and your creative fixes. Let’s take a look at a few post-production “cheats” and some problems that aren’t so easy to fix.

What Did She Say?

We will start where many editors end – if they actually get to it – with audio. We have seen/heard too many videos ruined by bad audio. Forget about advanced audio filters: too many editors pay too little attention to the most basic audio tweak, inconsistent levels. Keeping your eye on your audio meter, raise and lower your sound clip decibels, so your levels are congruous throughout your work. We like our levels peaking at -6dB. If your subject’s levels are sporadic, they can go above -6 but they should never clip’ above 0dB. Ultimately, it is your ear that should be the final judge, but start normalizing your audio with your audio meters

A quick and easy way to unilaterally raise all of your audio, while keeping it safe’ (below the clipping point), is to use a Normalization feature. This analyzes the entire selected audio clip, detects the loudest peak, then raises the gain (makes the clip louder), so that the peak reaches the desired decibel. You raise all the other audio with it, resulting in maximum gain without distortion.

Another option here is a Compressor/Limiter Filter. Found in most editing programs, this option lets the editor raise the less-powerful parts of the sound clip, while keeping the louder sounds constant. Otherwise, by manually raising the decibels of the entire clip, the louder parts could exceed 0db and clip.

So you’ve raised the levels to the top, giving the clip all the decibels permitted, and it’s still too low? A simple trick is to double, triple or quadruple your audio clips. Copy the audio track you are trying to raise, and paste it just below the original. If you have your original stereo track on audio tracks one and two, paste the second stereo pair on tracks three and four, the third on tracks five and six and so on. Make sure you have Snapping on, so the tracks are perfectly in sync. Just remember that you will also raise all other sounds in the clip, such as background sounds or undesired noise.

Some people pronounce their Ps particularly powerfully. This can cause a ‘pop’ into the mic that is unsettling. Ideally, you should use a pop filter when recording voiceovers to prevent these plosives or breath bursts. If you receive audio with pronounced pops, you might want to use one of the many editing programs that come with Depopper filters.

DeEssers do the same for snake-like vocals, or ‘S’ pops. Remember that there are parameters with these filters. Check the User’s Manual, which you can usually find under the Help menu, for more details.

Accidentally lay that audio cable over a power cable? You should have picked up the low buzz if you were monitoring with headphones, but this is no time for lectures. Fortunately, there is the Hum Remover Filter (a.k.a. DeHummer). Slide the Frequency slider until you find the sweet spot. Hint: if you are in the USA, try a value of 60Hz (or 50Hz for the majority of Europe). This corresponds to the electrical power in your country (Hz AC power). The Q slider narrows the range of frequency that you can remove. If you find you are losing some valuable audio when trying to remove the hum, then try adjusting the Q.

Where’d That Boom Mic Come From?

Quite often, when returning to the edit bay to capture your footage, you’ll notice an object on the edge of your frame that you know you didn’t include while shooting on location. In fact, you were so careful to make sure it was just off camera. What happened? With many consumer camcorders, what you see is not what you get. They include a bit more in the frame than they are showing you in the LCD. Many television sets will lose about 10% of the image around the edges of the frame, so camcorders add that 10% when you shoot. But, if you’re editing for the internet, your audience will see that extra real estate. Go into the Motion area of a single clip, and adjust the scale slider to zoom in on the clip. The general rule is that you can zoom in about 10% without pixilating your image too severely.

An amazing new feature in Apple’s Final Cut Pro 6.0 is SmoothCam. One cup of coffee too many, and that handheld shot is a bit too jittery. Smoothcam analyzes your shot and takes the shake out, while preserving the original camera movement. Pretty incredible. Adobe’s After Effects has a Stabilize Motion option, and there are third-party plug-ins such as Mercalli from ProDAD, but to have it built into the program is nice. Though they are adjustable, the presets seem to work well for us.

You can cure flicker resulting from horizontal edges in interlaced video with a simple anti-flicker or flicker filter found in most editing software. We run across flickering problems in both video and stills. Remember that you can usually adjust these filters, so open the filter in your Viewer or Source windows and experiment with the settings.

One obvious omission in this article so far is Primary and Secondary Color Correction. One of the most common fixes, for amateurs and professionals alike, is color correction. You can cure improper white balance, washed-out colors or maybe not enough contrast in color correction. This is why editing software manufacturers are putting so much time, money and human power into developing comprehensive color correctors. Comprehensive to some equals confusing to others, and the color correction process is extensive. Videomaker will soon have a 2 whole columns dedicated to Color Correction, so stay tuned. In the meantime, a simple technique can be used to warm or cool your image. Use an RGB Color filter that will allow you to adjust the three color channels in video (e.g., red, green, blue). For a warmer image, drop down your blue channel a little bit; for the opposite effect, make a cooler image by dropping down the red channel.

Editors don’t always have the luxury of being on the set when video is shot, unless the editor is also the shooter. If this is the case, resist the temptation to “fix it in post.” If it’s not the case, and your production crew is working fast and furiously, you the editor will most certainly need some of these “cheats” when the footage reaches your editing suite full of pops, hisses, hums, low audio, flickers, jitters and unwanted objects in frame. Remember that every tweak has the potential to add additional artifacting or imperfections, so monitor your cheats carefully. If your post-production problems are color- or light-related, keep reading this column, as we’ll cover that monstrosity in coming months.