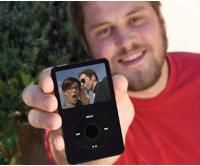 From YouTube on the Internet to iPods and cell phones, you can find video everywhere. But getting it TO these devices can be tricky.

If you or I made a video ten years ago, we would be extremely lucky if anyone other than our family and friends saw it. Television or a movie screen was the only outlet, and it would have cost you hundreds of thousands of dollars to get your work there. A short decade later, a video that costs a bit more than the price of a Mini DV tape has many distribution options, from YouTube to the iTunes Music Store to cell phones and handheld media devices. But all of these outlets require different compression strategies. Let’s take a look.

YouTube.com , iFilm.com, MetaCafe.com, BitTorrent… video outlets on the Internet seem endless. Not too long ago, it was a real challenge to compress video and audio for the World Wide Web, and, even if you did a good job, the viewers’ experience was not always great, due to their connection speed and/or the quality of their computers. There have been great improvements in all aspects of Web video, from faster and cheaper computers to quicker connection options to better codecs (compressor/decompressor software) to Web sites that have invested millions of dollars in server space and bandwidth.

YouTube is the obvious leader in online video. One of the obvious reasons for YouTube’s popularity is its ease of use, for both the producer and the viewer. YouTube, like other sites such as iFilm and MetaCafe, uses Adobe Flash as video player and compatible codecs, probably the leading online streaming method. Not only do videos look great in the most recent version of Flash Player, but YouTube has made it really easy to upload your video (see YouTube and MetaCafe sidebars for compression suggestions). You can upload .wmv, .avi, .mov and .mpg files to YouTube and MetaCafe from just about any camcorder, digital camera or cell phone (though members of the Videomaker community will probably edit them first). These Web sites then convert your video into an .flv Flash file.

BitTorrent is a peer-to-peer (P2P) file sharing software client that can deliver any type of file to and from anywhere on the World Wide Web. Some filmmakers will distribute trailers or whole movies using BitTorrent. Many use this service to trade copyrighted material, which is illegal. Most people distributing movies via BitTorrent use DivX compression, a form of MPEG-4. DivX is interesting, not only for its superb ability to compress lengthy video and audio files, but also because many new DVD players will play DivX files burned to a DVD or even from a Thumb/USB drive.

What could be cooler than pulling a handheld media device like the iPod out of your pocket to show off one of your movies? Taking a nine-hour flight to Europe or twelve-hour flight to Asia? No problem, as you can put four to eight feature-length films on a 1GB memory card to watch on one of these small players (make sure your device accepts memory cards). You could also plug one of these portable players into a video projector to show your videos.

iPod, PSP, Zune and many other handheld media devices primarily read video encoded with the H.264/AVC/MPEG-4 Part 10 codec, more commonly known just as AVC or H.264. Many of these devices can read other MPEG-4 formats, as well as other codecs.

It can take some time to encode H.264, but the finished results are excellent. You can accomplish this with most editing systems, as well as with QuickTime Pro, PSP Media Manager and products from companies such as Nero, Neuros and the PQ Computing Corporation. There are even a few free compressors online that you can find with a simple Google search.

The Blackberry, the Treo and the Razor are the popular players on the cell phone/video market (and we’ll see what the Apple iPhone does to the market). Though the lines between cell phone, PDA and MP3 player are getting blurrier and blurrier, there still are some considerations for compressing video for cell phones.

Cell phones play 3GP-compressed video. This technology uses MPEG-4 or MP4 compression. Many phones now play other MPEG-4 variations as well. If you promptly lost or disposed of your camera’s user’s manual, check your phone’s Web site, as most have PDF files of the user’s manual available for download.

The most important setting to concern yourself with when compressing for a phone is the frame size and resolution. Many of the smart phones have a resolution of 320×320, such as most of the Treos, though some Blackberry devices have a resolution of 240×320. Many smaller videophones have a screen size of 176×144. The soon-to-be-released iPhone from Apple will have a screen resolution of 480×320 on a 3.5-inch diagonal screen. Shrinking your video resolution to match your phone will shrink your file size and assure smooth playback.
Another way to get your file size smaller is with your frame rate, measured in frames per second (fps) and data rate, both with video and audio. Experiment to see if your video suffers from lowering the fps from 29.97fps to 15fps. This will help you out greatly. Many animations are made in 15 per second, so it is best to watch them that way.

Next check your data rate options. With video, you will most notice the lowering of the data rate with fast movement. The more motion you have, the less you’ll want to drop the video data rate. If the program you are using has the ability to use 2-pass VBR (variable bit rate) encoding, you will benefit from the compressor’s ability to scan the media twice for better compression.

With audio, music is the deciding factor. If your video is voice-only, you most likely could lower your sample rate to 22kHz, while music would be better at 32 or 44.1kHz. Lowering the bit rate can make your file smaller as well. Bit rate, or the number of bits per second of video, changes quality with different codecs. If you are using MP3 compression at 192kbps, your music will sound quite good. As far as music is concerned, 96kbps is low quality, and 320kbps is generally considered to sound exceptional. Again, this changes with the type of compression used, so you may want to experiment.

Many programs can help you compress your video/audio into a 3GP or MP4 file for your cell phone, including QuickTime Pro, Sorenson’s Squeeze, Nero Recode and Kinoma Producer. You can Google search for free programs as well, though remember the general rule: you get what you pay for. Sorenson’s Squeeze may be more expensive than the rest of these options, but it gives you great control over your work and, in many ways, gives you better-looking and -sounding media.

We’re not going to spend too much time here, as many of you already know how to encode for these technologies. (To find more specific articles, type “DVD authoring” in Videomaker‘s Web search field.) Keep this in mind: for a DVD to play in a set-top DVD player, the disc must be encoded in MPEG-2 (or DivX if your player will accept it). You can burn any type of file to DVD or CD for file transfer or back-up, but it most likely won’t play on a set-top player. VCDs are considered below-VHS quality and never really caught on in the States; with the low cost of blank DVD media, they most likely never will. Another consideration is bit rate. Though video bit rate on a DVD can be set as high as 9.8Mbps (without audio), pushing it above 8.5 might be asking for trouble with some players.

Video distribution was a grim prospect ten years ago. Today there almost seem to be too many choices. As long as you know your limitations and you have the patience for some experimentation, you should be able to get pleasing results. The following question remains, though: where will video be viewed ten years from now? We really wish we could answer that, but, sadly, we left our crystal ball out in the rain…

YouTube: Compression Suggestion
QuickTime .mov, Windows .avi or .mpg files are the most common formats today, and they work well within YouTube’s system. The YouTube Web site recommends using the MPEG-4 (DivX, Xvid) format at 320×240 resolution with MP3 audio. Here is a format that worked well for us:

Metacafe: Compression Suggestions
Though MetaCafe also accepts many file formats such as MPEG, .avi, .wmv, DivX, ,mov, MP4, .flv and 3GP, the Web site suggests you use these settings: