As editors, we are in control of the time universe. We can stretch it, shorten it, and even change Fate by manipulating Time.

There are many reasons why we edit our video – to juxtapose two or more shots for greater meaning, to show simultaneous action happening in two different locations, to move the audience from one location to another – the list goes on and on. But probably the number one reason is to manipulate time.

The first commercially exhibited movies occurred in the final days of 1895 in Paris, France. They were two-minute mini-documentaries, or actualities, that were continuous shots without editing. About seven years later, an American, Edwin S. Porter, imagined a more creative way of telling stories with this new medium of motion pictures, and it is he who is credited with "inventing" editing. He edited two short films in 1903, the documentary The Life of an American Fireman and the narrative The Great Train Robbery. Ironically, some stories say that Porter's boss, Thomas Edison, of the light bulb fame and early innovator of the motion picture, did not like his techniques of cutting up the film, taking parts out and putting the footage back together. Regardless, editing was born.

If I Could Turn Back Time

Hollywood films such as Interview with a Vampire and The Red Violin (Le Violon Rouge) take place over a period of hundreds of years, so without time manipulation via editing, these stories would not be possible. Let's look at some of the techniques used to compress time, as well as draw it out.

We'll start with some of the simpler techniques. The first literally shows time moving in the form of pages dropping off a calendar or the changes to a clock. Both digital and analog clocks can be used. Shoot the clock in real time and, in your editing program, speed the clip up or slow it down. If you are fortunate enough to have a camera that shoots time lapse, this will save you time in post (no pun intended), but most of us don't have this luxury. 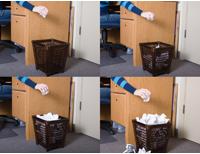 You can show time dragging in many different ways. One example is the classic scene of a writer sitting at a table tossing crumpled papers into a wastebasket. Here are a couple ways you can set this scene:

I remember an old music video that showed a student sitting in a schoolroom waiting for class to end. The child stared at the big, round, white wall clock, its red second hand moving in slo-mo. The second hand was slowed down, taking about four seconds for it to click to each second. Time was crawling. A good movie example of this technique is Groundhog Day, when actor Bill Murray's character is stuck in an endless life of repeating one day over and over again. The scenes using Murray's morning alarm clock are shot extremely tight, and slowed agonizingly down.

Another time lapse technique often used to show the passage of time is night turning to day or vice versa. You've seen this one many times as well. People are shown going to bed, and the next shot in the story is the exterior of the suburban house as darkness turns to light, aided by the sound of morning birds and other early morning sounds. The exterior shot is "locked down," camera on a tripod not moving. If you are shooting to Mini DV tape, you have only an hour of tape, so time your shot to end just as the sun is coming up. In other words, start shooting about fifty minutes before sunrise (auto exposure). Speed up the hour-long clip so it takes, say, ten seconds to play. That will be 360 times normal speed. Here, we've manipulated the speed of the clip to make time seem to move more quickly. It works like magic.

There are many ways to use this time-lapse technique. The long shadows that are formed at the end of the day move as the sun sets. There are a few ways you can show this. You point the camera at the object or building, making sure that the shadow will sweep in the direction you want, and will be in the shot, then shoot the shadow for a full hour and speed up the clip. Or shoot the subject or building, and let shadows of trees outside the shot's range play across your subject. 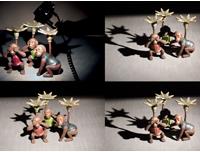 Another way to simulate this is to control the lighting inside. You can lock down a shot of a tabletop object with its shadow cast on a floor or wall, and carefully, smoothly sweep a light over your subject. The shadow moves, the subject does not. This short time lapse of long shadows quickly becoming longer will signify that time is moving.

Another way to speed up time is with a cross dissolve. Let's say you have a very lengthy shot, with a cowboy walking from the desert into a small town. Instead of showing the whole ten minutes of the gunslinger walking towards the camera from far away, show five or eight seconds of him from a distance, then cross dissolve to a section of the clip when he is much closer for another five seconds, and do the same to a section of the clip when he is right up in front of the camera. I saw this just the other day in a British soccer film called Goal (2003). It was a lockdown shot of an athletic locker room, with the camera in the back of the room, pointed at the door and showing all the lockers. A three- second clip showing one player enter the room was cross dissolved to a shot of three players entering (the first player is now in the foreground at his locker), cross dissolved to a shot of six players entering with the first four at their lockers.

The cross dissolve is also used when showing a child turning into an adult. The scenario usually goes something like this: a young child on the farm is learning how to interact with, say, a horse. Then, there is a long cross dissolve to the same person as a young adult, usually more confident and, if it's a Hollywood film, much more attractive, riding the horse with ease. Some films will have text saying, "Ten Years Later," but if done well, with a few visual similarities between the child and the young adult, the onscreen text is not necessary.

Gotta Have a Montage

Probably the most popular way to show the passing of a good amount of time in a short amount of screen time is with the montage, made popular with Sylvester Stallone's first Rocky film. It has become a bit of a cliche, so much so that the makers of the South Park animation made a song mocking it in their most recent film Team America: World Police:
LYRICS:
Show a lot of things happening at once,
Remind everyone of what's going on
And with every shot you show a little improvement.
To show it all would take too long.
That's called a montage.

The idea is to show a character improving skills in a short amount of time. The sequence is usually cut to music that reinforces the mood, usually driving, inspirational, upbeat music climaxing with the final achievement of the goal. In Rocky, the boxer reaches the top of the stairs and spins with his arms in the air, victorious.

A great example of a different type of montage can be seen in the extremely stylish film Snatch by Guy Ritchie. Dennis Farina's character tells someone on the phone that he is coming to London from New York City. A quick barrage of shots follows that goes something like this: the phone is slammed down, a yellow NYC taxi door is slammed shut, the taxi "available" light is turned off, sleeping pills are shoved into the mouth of the airline passenger and he drinks them down, the Concorde takes off, the Concorde lands, a British cab door is slammed shut – and the man is in the London office in about six seconds. Each of these shots carries for less than a second, but sound plays a large part in this montage. What makes it work is Ritchie kept each short shot tight, without a lot of distracting clutter, and each shot also has a very distinctive look, color and sound. Check it out.

As you are now seeing, time manipulation can be found in just about every feature film. The cliche's are the most obvious, but watch some of your favorite films, take note of how the filmmakers manipulate time, and simulate these techniques in your works. The great filmmaker Stanley Kubrick was said to have noted that the editing process is the one phase of production that is truly unique to motion pictures. Photography, set design, acting, etc. are all borrowed from other arts, but editing originated with filmmakers about 100 years ago. And one of the main objectives of this unique art form is to manipulate time. Go get manipulative. Time is on your side.