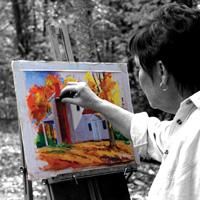 Think of your fondest memories: the orange setting sun on your vacation, the green cactus and red earth on your last desert hike, the blue of a loved one’s eyes.

Color is a large part of your video image, and just as you control the actors, locations, props and dialog in your video, you can control color. Many directors in the past have controlled color on the set with lighting and costume, but many filmmakers today, with the advancement of computerized post-production techniques, are opting to control color in the edit bay. Robert Rodriguez’s recent Sin City was a glossy black and white film with certain objects, such as a woman’s lips or the blood spilling from a person’s wound, bathed in rich color.

Most color correction is supposed to be subtle, such as bringing down the whites to legal broadcast levels, correcting under- or overexposure or maybe correcting a white balance problem. But that is not our objective today. We want to tweak the color for effect.

One popular effect is to add contrast to your moving image. We can use the Color Corrector 3-Way filter to do this by “crushing the blacks” or “blowing-out” the whites a bit. High Contrast scenes are often used for flashbacks and dream sequences, as well as a general stylized look. We can even create a Bleach Bypass look that is used often in commercials, music videos and films such as Saving Private Ryan and The Mexican.

Let’s start by applying the Color Corrector 3-Way filter to a video clip. You will be able to see how you are affecting your image by simultaneously using the Waveform Monitor to see how crushed your blacks are or how high your whites are being pushed.

Unlike white levels, which can go above 100% and become “broadcast illegal,” blacks can only be pushed to 0% or pure black. Pushing the dark or shadowed areas to 0% is referred to as “Crushing Blacks.” Dark hair may have shadows in it, giving it detail and making it look natural. By lowering the blacks to give the image more contrast, you lose detail in important areas of an object, such as a character’s face. To fix this, raise the luminance slider under the Mids color wheel to bring that detail back.

Likewise, you can raise the whites, but now you really want to keep an eye on your waveform monitor to assure you keep your whites under 100%. Many editing programs will have a Broadcast Safe filter that will clip whites at 100%, keeping it legal. Bear in mind that by pushing your whites, you may again lose detail in important areas, just like crushing blacks. To compensate, this time lower the luminance slider under the Mids color wheel. By doing both of these, crushing the blacks and pushing the whites, you can achieve a very high contrast image. Taking both to extremes will approach a black and white image. A useful tool while adjusting the blacks and whites is called the “before and after” check box in Final Cut Pro. Your program may have something slightly different.

Bleach by-pass is a technique used in feature films and achieved in the lab. We can simulate this look by creating a high contrast scene as detailed above and then lowering the overall saturation in the clip. Experiment with the sliders for desired results.

There are many black and white looks. When DPs (Directors of Photography) shoot film, they have black and white film stocks to choose from and use different lighting techniques and processing techniques to achieve their black and white look. It is difficult for us to achieve all of these variations, but there is a broad range of looks we can achieve. Instead of using the one-click black and white “button,” use the Color Corrector 3-Way filter. Lower the Saturation slider all the way. Presto, you have black and white. But what often makes black and white so beautiful is the high contrast, as seen in films like Dead Man by Jim Jarmusch. You learned how to do this with the Crushing Blacks lesson earlier. You can go even more extreme by raising the Mids luminance slider, eliminating even more detail. You will most likely need to lower the Blacks a bit more and raise the whites a bit after changing the Mids slider.

The One Color effect was used in Rumble Fish, Pleasantville and Sin City. The general effect is to have a black and white video with just one object of color. We’ll use the Color Corrector filter for this effect. This filter looks similar to the Color Corrector 3-Way but has only two wheels and the process is often called Secondary Color Correction.

Green screens and blue screens are used when a director wants to make an object or background disappear. This is because green and blue tints are rarely found in the color of a person’s skin. When the color is “keyed-out” in post-production, segments of skin rarely disappear, just the desired object. The same idea works for us with One Color. If you know you want a black and white clip but with a woman’s lips colorized, “paint” her lips either green or blue.
In addition, it is best, but not essential, to eliminate this very color from the rest of the shot. If the green that you use on her lips appears elsewhere in the shot, we can stop the picture from disappearing by using a garbage matte.

Place the Color Corrector filter on the clip with the woman’s green lips. The Limit Effect Eye Dropper in Final Cut is our main tool for this; other programs should have a similar tool, often known as “The Pleasantville Effect,” but it might be called “selective color replacement” or other such similar name. It is easiest when you zoom into the desired object, in our case the lips. Click on the Limit Effect Eye Dropper and click on the green lips. Now go to your Saturation slider in the filter controls and drag it all the way to the left, desaturating the selected green, turning it gray. Chances are, all of the lips’ surface area has not turned gray because there are different shades of green on her lips. Click on the same eye dropper again and select an additional shade of green, hold down the Shift button while clicking. The new shade should turn gray and the previously selected shade should still be gray. You may need to continue this process many times to select the entire desired area. You most likely will have to adjust Softening and Edge Thin to perfect the selection process. Start with the Softening option, as the Edge Thin option will not work without first Softening. This process will take some finesse and fine-tuning. Be patient.

Many color correctors will have a Key button. This toggles between a matte version of the selection and the current version you are looking at. Clicking the Key button will turn the entire image black except the selected portions, which will be white. This identifies the alpha channel you created for this image. When activating this feature, you may find you selected some other unintended areas because of some similar tints you’ve selected elsewhere. You can place a garbage matte over these undesired areas to keep them from being affected. A garbage matte is a video filter or effect that can be placed on a video clip to select portions of a frame and commit them to the alpha channel, giving them a user-selectable transparency (usually completely transparent). Now that you have only the desired area selected, and in effect turned gray by using the desaturation slider, we can turn the entire image black and white and the desired object back to green using the Invert button. Now drop in a second Color Corrector filter and, by moving the Hue wheel on this new filter, you can change the woman’s green lips to any color you desire. Pretty cool. Most intermediate to higher-end programs have these features, although the names may differ.

We have touched on only four popular color effects achievable with color filters. There are many, many effects that can be realized. Don’t be afraid to experiment with the filters and eventually you will stylize your video on your own computer in the same way as the big boys and girls are doing in Hollywood.