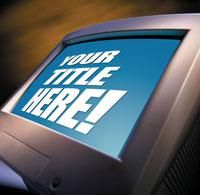 Quick, open your titler, choose a trendy font and color, then type some words and position it on the screen; done. But there is more, much more, to titles than this.

Titles are often an afterthought for video producers. Something needs to introduce your work – why not a title? Titles can do so much more for a video than just tell the audience the general theme of the work. Some Hollywood producers spend tens of thousands of dollars for their opening titles. Remember the opening title sequence of David Fincher’s film Se7en? Kyle Cooper, the title designer, sculpted this intricate, densely layered sequence with individual words superimposed over each other – some fading in as others faded out, and some jolting right or left as others lurched around the screen. It was all the talk when it came out in 1995. And it is still being imitated today (rent the Platinum Series DVD to learn more about the titles).

A certain title sequence can also become a “trademark” of sorts for your film. Think of the circular gunbarrel matte used in James Bond films, where a silhouetted Bond steps into the circle and fires his gun toward the audience. And who can forget the Star Wars fading-into-oblivion titles?

Then there are producers like Jim Jarmusch who usually use simple bold white words on a black background. Some movies don’t even have opening titles; they just get right into the story, a technique that may work for some of your videos. A title is not mandatory. The main thing to remember is that all of these titles set the mood for your work and progress the story just as every scene in your piece should do. It is not just arbitrary fonts with random colors thrown somewhere in your video. Your video should be stronger once the title is added.

Keep in mind that trendy title styles and techniques are often hot today but stone cold tomorrow. We give this warning because you could figure out how some big Hollywood filmmakers made their flashy titles and imitate them, but will they be out of fashion in two years, dating your work? Something to think about. Many times less is more. That said, titles are often the first image the audience sees and first impressions go a long way.

Another consideration is your final distribution format. Are you sure your video is going to be playing on the big screen in nationwide multiplexes across the country or is it more likely to be on YouTube or another Internet outlet? Your titles will have to be bigger and bolder if your finished piece will be seen at 320×240 pixels on a Web site.

Though built-in titlers are much more robust than just a few years ago, many filmmakers still prefer the level of detail that graphics programs such as Photoshop and Illustrator provide in the making of their titles. The most recent version of Adobe’s Photoshop is designed with filmmakers in mind, with many new video functionalities, such as templates for different video formats and more video filters. In addition, many higher-end editing programs, such as Adobe’s Premiere Pro 2.0 and Apple’s Final Cut Pro 5.1, allow the different layers made in Photoshop to be imported as separate video layers which can be individually manipulated – a very nice feature.

There are two important issues to keep in mind when importing graphic files: first is the difference between non-square video pixels and square graphics pixels. There are ways to compensate for this conversion. Second is the need to export an alpha channel correctly so the title shows correctly over your video (see the sidebar Non-square Pixels and Alpha Channels).

Regardless of whether you import your titles or use the program that came with your editing software, there are some tricks to titling that you need to know:

Titles are important, whether you use them or opt to omit them. As they usually come at the very head of your video, they could set the tone for your work. Used correctly, they add to the overall video and audio in your project. One last bit of advice: check out what the pros are doing and see if you can learn something from them. For instance, the titles on the Star Wars series now have a 1970s look, but George Lucas kept the theme through the series for continuity. Some notable title sequences include Snatch (which imitated The Good, The Bad and the Ugly), Se7en, Fight Club, or any of the Flash-like graphics used in Monty Python films.


A graphic created in a graphics editor (e.g., Photoshop) will look distorted when brought into editing software and displayed on your TV. This is because your editing software uses what is called non-square pixels that look more like a tall rectangle, rather than the square pixels that graphics editors use. You’ll want to create a frame size in your graphics program that is equivalent to the video frame size you’ll be editing with. If you are using newer graphics programs such as Photoshop CS or After Effects 6, there is a preset built into the program that does this automatically when you create a new document.

Otherwise, you will need to do some converting. If you are editing a DV-NTSC 4:3 video aspect ratio (720×480), create a 720×534 canvas at 72 dpi in your graphics editor (for other video sizes, search the Web for non-square pixel images). When you have finished creating your image, save it as a Photoshop file (.psd) in case you need to make changes in the future. Now re-sample (don’t resize) the image by going to Image>Image Size and change the Pixel Dimensions to 720×480, keeping the Resolution at 72. Make sure Constrain Proportions is unchecked and Bicubic is selected from the Resample Image pull-down. Save as a new file. It may appear stretched in your editor but will look normal on a TV set.

If you make your title in a graphics program like Photoshop, you must make sure you have an alpha channel attached to your image before it is exported. Make sure it is actually exported with your image, check that your editing program imports the alpha channel (most do automatically but check the preferences) and be doubly aware that it is displayed properly in your project.

As far as creating and exporting, we will use Photoshop as our example, as it is the most used image software. When creating a new title to be composited, make sure you open a new file with a transparent background (check the Transparent option in the dialog box that appears when you create a new file). Once you have made the image, create a new channel in the Channels window, second button from the right at the bottom of the window (usually grouped with the Layers window). Creating this new channel is putting an alpha channel into the image that the editing software will need in order to assemble the transparency of the image. (However, you might not need to make this channel if you’re using newer editing software applications, as many of them can automatically detect the transparency built into the .psd itself.) We then save as a Photoshop file and make sure the Save Layers button is checked. Now, as long as your editing software is set up to accept alpha channels, you should be in good shape.