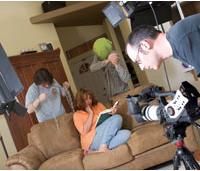 Time to dim the lights and tell ghost stories. Our Editorial Department demonstrates some techniques on putting some spook into your videos.

On the ancient map of the then known world — out beyond the boundaries of what had been explored — there was nothing save the small legend "there be monsters here." In order to make what we see seem somewhat unseen (ghosts) or to make what is there appear to be not there (headless characters) you need to wrap your brain around layered effects. These allow you to apply an effect, such as transparency or a color key, to an object or character on one layer, while leaving the background layer unaffected. Let’s use these basic techniques to build two spooky characters into a fun and easy to achieve shoot-it-yourself scene.

Our basic scene is a brightly room near a sofa. The background should have some pictures, objects or some depth (a hallway), so when we create our spooky characters we’ll have something to see behind them to "sell" the transparency and color key effects. Set your camera and tripod to frame wide shot of the first character, the reader, sitting on the sofa — plus allow scene framing room for two monsters next to and behind the reader. The first "take" in the sequence is to shoot a few minutes of the reader character simply reading the book, looking interested, scared, etc. — reacting to what she read, and turning the pages of the book.

With that shot "in the can," call CUT and have the reader carefully leave the scene. Leaving your camera untouched, have the first monster character come in and position him to either side of where the reader sat. Have your ghost character crouch behind the sofa out of sight, roll the camera and have him pop up and do exaggerated motions as if he were trying to taunt the reader. After about 10 seconds, have him pop back down out of the scene. We tried it a couple of different ways. Now it’s time for the headless monster.

To pull this off, you need a piece of bright green "breathable" cloth large enough to completely cover the "headless" character’s head. (We used a jersey pillowcase, as jersey stretches well so wrinkles don’t show.) Have the headless character pop up on the opposite side of the sofa from where the ghost popped up and “act out.”

Now, before you strike the set (put the furniture back in place and clean up!), We need two more quick shots so we can pull a nice surprise on our audience at the end of the video. Bring back both monsters and shoot them both popping up, miming "casting a spell" on the reader, then have them shake hands and high five each other.

Finally, roll at least 10 seconds of the set with no characters for the final composite. Now fire up your editing software and let’s make a horror movie!

First drag SCENE 1 onto your timeline. Next, create a new timeline layer (the compositing layer) and place SCENE 2 on this second track.

In order to create the composite, you’ll need to do two things to Scene 2. First crop the bottom and non ghost side of frame so that you can composite your ghost footage over the original scene behind it. This crop function is in all editing software and will allow the reader character to be revealed in the composite.

Then apply a transparency filter (called Opacity in some software) to SCENE 2 on your compositing layer and set it to 50% or whatever looks best. The composite shot should show a semi-transparent ghost character rising from behind the sofa to taunt the reader — who will remain blissfully unaware of what’s happening!

Now move down the timeline and place SCENE 3 on the compositing track and use the same techniques to crop it, but this time, instead of applying a transparency filter, use a color key filter — to turn the head of the headless one completely transparent.
Each editing software has its own way of doing color keying, so you might need to consult your software’s manual and experiment a bit, but most of them will let you pull this kind of simple color key.

Putting it All Together

Finally, move down to the end of your timeline — but expand it to at least three separate timeline tracks: the original reader track and two copies of the track with both monsters on it. This is very important. You have to make sure you separate these scenes by track. You need two separate tracks of the dual monsters scene so that the ghost’s transparency effect won’t also affect your headless monster.

Crop these two scenes so that you reveal both monsters and the reader. Then, right after the monsters cast their big spell, replace the original reader scene with the empty master shot and apply some kind of effect, perhaps a particle dissolve or flash effect. And voila , the unreal monsters get their revenge by making the real character disappear in the end.

Big overall lesson here? Stack multiple copies of a shot on your timeline and by applying cropping, keying, and different effects, you can manipulate different parts of the same scene to get very cool results.

Your skill with layered effects like these can put you in command of all sorts of fancy compositing like you see in Hollywood movies and on TV.

Editorial Note: Our entire Production and Editorial staffs got involved and we had a blast trying this out. Morgan Paar and Andrew Burke shot lots of BTS (Behind the Scenes) footage presented at the end of the Tips & Techniques segment of Videomaker Presents Vidcast Episode #36.