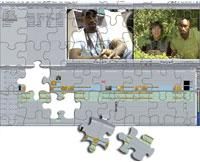 Even if you’re happy with the features in your current editing software, sooner or later you’re going to find yourself wishing that it did–well, just a little bit more.

In the specific world of video editing, common third party programs do a lot of useful things. Including:

Third party imports can cover everything from simple utilities like specialized timecode calculators to nearly full-featured programs like color correction suites or major batch processing programs. Yes, the terminology gets a bit confusing. What’s a "plug in" and how is it different from a "utility?" When is something an application, or a so called "mini-app."

To define whether something is a utility or a plug-in, the first distinction is whether the program does something by itself, or whether it must work within "host" software.

Utilities are essentially stand-alone mini-applications. There are utilities to do simple tasks like calculate the memory space required to store a particular amount of digital video on a hard drive – and complex utilities that do major batch-processing of hundreds, even thousands of files — like resizing libraries of photos or transcoding video files from one codec to another. However, these kinds of tasks, that used to be the province of utilities, such as digital waveform monitors and vectorscopes, are more and more being written directly into the primary software programs, so video specific utilities are not quite as popular now as they used to be.

The world of plug-ins, by contrast, continues to thrive. Plug-ins are typically operating system, manufacturer or sometimes even software version specific bits of code that expand or enhance the capabilities of a primary program. We talk of a "Premiere plug-in" and everyone should understand that unless you’re using the Adobe Premiere editing application, chances are that this bit of code will be useless to you. A good example is Aspect HD — a plug-in for Adobe Premiere that enhanced the standard-def version of the program so that it could handle HD editing. So, plug-ins are typically program specific.

One extremely important sub category of plugs-ins that relate directly to video editing are codecs. If you’ve been working with video for very long, you’ve likely run into the circumstance where a particular video clip won’t run on your system. This is typically caused by the reality that every video clip needs to be encoded and decoded from one of the various video standards.

The word "codec" is a portmanteau for coder-decoder or compressor-decompressor. A codec uses a particular algorithm to encode video, audio, or data files. A common use is for streaming or downloadable video, where the codec decodes it for viewing. RealVideo, H.264 and MPEG-2 are a few examples.

To make this a bit more confusing, there are file formats that appear to be codecs but are instead containers or wrappers for codecs. AVI (Microsoft’s Audio Video Interleave), RealMedia and Apple’s Quicktime are examples of wrappers. These files can contain a wide range of different codecs inside them.

In order for your system to decode and play the video you need to have the proper codec installed on your machine. And codecs are typically distributed as — you guessed it — plug-ins. Since the clever software engineers are always trying to dream up better and more efficient codecs, distributing new "plug-ins" is generally the most efficient way for software developers to help users constantly upgrade their computer’s capabilities and allow them to decode and use the most current codec streams. One challenge, however is that there are literally hundreds of thousands of utilities and plug-ins available and unless you go looking for them, you’ll likely never run across the little jewels that can potentially help make your computing life easier.

Where to Find Them

The first stop on a search for plug-ins that work for your particular hardware and software configuration is the manufacturer Web sites for the companies which produce the products you use.

They often maintain plug-in libraries directly in their own web sites — or at least links to sites where plug-ins that are compatible with their products can be found. The second place to look is on what I call "update sites." These are Web sites that specialize in posting the latest and greatest versions of everything from freeware, shareware and commercial software. One of my favorites is VersionTracker.com. It exists to help computer users — both PC and Mac — keep up with the latest versions of software, including utilities and plug-ins.

Not only will it list most of the available utilities compatible with the hardware and software you use, but it provides useful information like the program size, what type of license (including lots of "freeware" and "shareware" programs), and even a product rating system that lets other users comment on the stability and utility of the plug-in. Cool stuff.

One final word to the wise before you go third party program crazy. Unlike major software releases, useful add-on programs, utilities, and plug-ins come from a wide variety of sources. It’s possible to run into a downloadable utility or plug-in that looks at first glance like it might be the solution to your prayers — only to discover that when you install it, it’s the source of a system conflict, or even a system crash. So as with all things computer, practice safe computing habits and keep your virus protection in place when auditioning plug-ins.

It’s also smart to keep a running list of which third party programs you add to your system – and when – in case the addition of the new utility or plug-in affects something else. That said, third party add-ons are one of the best ways to take programs you already use and add even more capability to them.