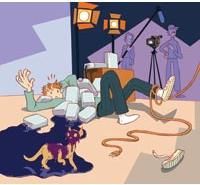 If you've been around video productions for any time at all, you know that Murphy was right. If something can go wrong, it will. If the camera is rolling (and hopefully, it is!), you've witnessed the creation of one of our industry's true joys: the outtake!

So just what is an outtake? It's just something that goes wrong or was unplanned and is caught on tape. And the funnier or weirder the better. A spokesperson making a mistake isn't an outtake. But when they make the same mistake six times in a row – berating themselves over and over, louder and more frustrated each time they blow it, and then everyone on the crew cheers when they finally get it right — now that's an outtake!

Actually, it's a classic example of the kind of "good" outtakes that celebrate the spirit of camaraderie and shared struggle on the set. Bad outtakes are mistakes that make people look foolish and cause hurt feelings. If the company CEO is supposed to deliver an introduction to the latest corporate video, but muffs the delivery half a dozen times, it might be funny — but making her look foolish in the eyes of her troops might also be the last video you do for that company.

Essentially, outtakes that make fun "of" someone rather than sharing that spirit of a shared on-set struggle must be approached very, very carefully. See the sidebar — "A Call from the Client."

Funny is Good
One classic approach to assembling an outtakes reel is to combine your clips with humorous music and/or sound effects. It's a clear signal to the audience not to take the outtakes seriously and frames them in a clear spirit of having fun.

In our multiple mess-ups example above, try dropping a Take One slate on your timeline — followed by the first clip with the error. Then find a sound effect of a harsh buzzer and slap it over the end of the take immediately followed by the Take Two slate. Another muffed line. Buzzer. Slate Take Three and repeat for a couple more takes, then when the spokesperson nails it on take 6 — the buzzer gets replaced by a joyfully ringing bell along with the sounds of a crowd cheering!

The fact that the talent came through in the end and the job was done properly lets everyone enjoy the previous mishaps without casting doubt on the talent's competency. That's a good outtake sequence.

Finding Room in your Program

Outtakes do tend to break the flow of any program, so in most cases, they tend to get their own "showcase" place — often at the end of a tape during or after the credits are finished rolling. Some movie directors are known for having interesting credit rolls, and movie goers in the know will tell you, "make sure you stay through the end of the credits for the bloopers." Still others, such as animated features, will make up bloopers to roll at the end, adding even more depth to two-dimensional characters. Monsters, Inc. and Shrek II have good examples of this technique.

But your outtakes don't always have to be the fluffs, muffs, and goofs you'd expect your audience to laugh at. For instance, nearly everyone who owns a dog or a cat shoots a few seconds now and again of their pet's antics, usually while shooting something else. So after a year or so, you'll easily have dozens of clips, most maybe 10 or 20 seconds long. They've never really fit into any one video you've been compiling, but if you've kept track of where they are, you can combine the best part of each for a minute of a musical interlude of the dog's best antics.

Pass the Popcorn and the Cliffhanger

Instead of having your outtakes run at the end of your program, another way that you can use them is in between your segments, as bumpers, interstitials or segues.

The Videomaker office has an honest-to-goodness old-fashioned New York City popcorn machine they use to snack from. (Editor's note: we also have a surrey, basketball court and scooters–it's a fun place to work!) Recently, one employee was teaching another how to operate the popcorn machine, and being videographers, someone grabbed a camcorder and recorded the sequence. The segment might collect dust unseen in a closet or you may eventually see it in one of Videomaker's upcoming vidcast segments. It obviously wouldn't fit into a highly technical explanation of vidcasting, bitrates, MPEG-2 or anything of that sort, but if edited correctly, short portions of it could be used in between vidcast segments, culminating at the end of the show. If done right, this type of segmented outtake keeps the viewer interested in how the end plays out, giving a little inside look behind the scenes at the Videomaker staff. It could happen.

So I make it a habit when I'm logging my tapes to keep my eyes peeled for outtake material and label it as such: OT#1 — OT#2, etc. Then I can build my outtakes section after my main edit is complete.

The bottom line is that people love outtakes. They remind us that everyone's human and that we all make mistakes. I've had clients stop a shoot cold, just so everyone can gather around the production monitor and watch and re-watch some disaster. So celebrate those little "on set" mishaps. Share them with everyone and you'll probably find yourself hearing the same thing I do more than I ever suspected…

"Let's get this main program finished — I want to be around to help edit the outtakes!"

Contributing Editor Bill Davis writes, shoots, edits,
and does voiceover work for a variety of corporate and industrial clients.

Call from the Client — Discretion

The senior VP was having such a good time that he "let his hair down" a little too much and said some teasing but clearly critical things about another high-ranking exec.

At 8:01am the very next morning I got a panic phone call. He hemmed and hawed and I could tell he has spent most of the night worried that his "on tape" comments would get passed around and might potentially hurt his career.

As I assured him that the footage would disappear forever — including from the programs "outtakes."

A month later another division chief in that same large company called me with a project containing a lot of sensitive company information. He specifically said "(the senior VP) said you could be discreet — that's critical in my project…"

Clients may hire you based on your talent and ability. But they'll often keep you and recommend you based on more than just your ability to "do the job."

About a year ago, I got a chill up my spine when I saw a story in the local paper about how a professional football team had done a "spoof" video featuring some inappropriate locker room content. The story mentioned that one of the first steps the team took after the incident made the headlines was to immediately — and very publicly — terminate its relationship with the videographer.

People often assume that whoever makes the video has a hand in controlling the content — even if in actuality all you're doing is following a client's instructions.

Outtakes are often a place where we feel we can be a bit "edgier" than we are in the video itself. Just keep in mind that "edgier" often needs to be combined with good judgement if you want everyone to be comfortable with the results.