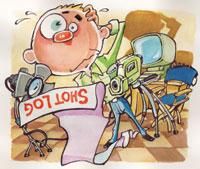 What do you think when you hear the words “shot logging.” Do your palms sweat? Do your eyes get all glassy and unfocused? Do you start to shake like a wet poodle? For some reason, a lot of beginning videographers see the task of shot logging as the video production equivalent of taking out the trash: necessary, but certainly not the glamorous part of the job. And it’s usually one of the first tasks a director palms off on an assistant. In this article, we hope to convince you to change your attitude about this seemingly humble task. We truly believe that shot logging is the place where great videos are born.

The Basics
Shot logging can be a two-step process. In production, logging happens while you are shooting. Take after take, you write down the time code and a brief note on the shot. Then, back in the edit bay, you manually enter the time code of the good shots into your software and capture away. If you have taken careful notes, you are ready to edit at the end of this process.

Most of us run-and-gunners can’t simultaneously shoot and log, so tape logging often happens in post production. In the editing process, shot logging comes right after your field shooting and directly before you start to build your timeline. The basic process of shot logging is to shuttle through your tapes while logging time code in and out points for the scenes you want to keep. You watch the tape, press the “I” key at the start of a good take, press “O” a few seconds after the action ends and then name the take something logical and useful. This eliminates any bad takes or material you won’t want in your final edit in a sort of pre-edit. Marking these in and out points is how you set up your tape for batch capture. This process is one of the things that makes editing so efficient. You only digitize the footage you’re actually going to use and leave all of the bad takes behind.

Caution
There are some good reasons why you might want to be a little cautious of letting someone else take over your shot logging tasks. First and foremost, many beginning editors consider logging tapes to be merely a process of elimination. They sit down to figure out what they won’t use. You might want to look at shot logging differently, perhaps as a process of exploration, seeking out undiscovered treasures. Even when you shoot every frame of the footage yourself, you’ll often find things you missed in the field.

I remember a field production years ago where I was working with a full crew including a camera operator. We were moving around to various locations in a retail store and at each spot, I’d plant myself in front of the monitor and watch every take like a hawk. At the end of the day, I knew we had all the basic shots covered. When we got back to the shop, I almost decided to let someone else log and capture my footage based on the original script and the Scene/Take information from the shoot.

But I didn’t. Instead, I took some time the next day to examine the field footage. Much to my surprise, during one of the transitions between locations in the store, the camera op accidentally left the camera running. In the middle of that mistaken footage, the camera happened to swing across the wall of the store, and, for a moment, the camera paused and focused on the company logo on the wall before swinging away again. The effect was visually interesting. After I slowed the footage down a bit, we ended up using that very shot as a part of the opening sequence. If I had left the logging for someone else, chances are they would have simply fast-forwarded over the mistake and never seen that gem of a shot hidden in the footage.

Hardware Logging
The fact that you need to do your own logging and become thoroughly familiar with your material does not mean that you have to make the process any harder than it naturally is. Nearly every professional-level editing package on the market has excellent built-in shot logging capabilities.

There are also hardware-based shot logging solutions that can help you make short work of eliminating obvious blown takes and bad shots before you ever get back to the edit suite.

Sony has a Clip Link system that lets you mark shots “OK” or “NG” (no good) in the field. Unfortunately, this is a proprietary (and expensive) system and it only works in conjunction with compatible Sony camcorders, tapes and EditStation systems.

A number of companies (such as Pipeline Digital, Cinergy and TCLogger) sell slick hardware shot-logging solutions that allow you to log your tapes to a Mac or PC as you shoot, complete with image thumbnails. All these solutions are steps forward in helping the high volume videographer get organized, provided you have a Mac or PC nearby.

In the end, no matter how much technology you bring to bear on the process of logging your tapes, you need to make sure that your system isn’t getting between you and your understanding of the scenes that you’ve actually captured to tape.

Final Thoughts
I can’t count the number of times I’ve been sitting at my edit desk facing the need for a cutaway shot or a bit of B-roll and realized that I’d seen something in my unused footage, somewhere. Since I had taken the time to log and capture all my own footage, I merely had to scroll through a few pages and read a few notes and there it was. If I hadn’t done the logging myself, it would have been a process of inserting tapes, fast-forward, rewind, play, eject, insert new tape and repeat. And that’s a best-case scenario where I even remembered that I had shot that footage.

Your field footage is the raw material of your project. Not giving yourself a chance to become thoroughly familiar with your raw materials diminishes your chance to figure out new and interesting ways to build an excellent communications framework using that raw material. It may seem like you might have better spent your time doing something else, but tape logging is likely to save you time and improve your productions.

So the next time you find yourself sitting down to log tapes, and before you ever add an In or Out point, begin by adjusting your attitude. Logging is actually an opportunity to let your mind wander over the raw materials of your video. Train yourself to view shot logging not as a task, but as an opportunity to uncover the hidden treasures and to help you transform your raw material into a powerful program that will leave your audience enthralled.

Contributing Editor Bill Davis owns and operates a video production company in Arizona and has been logging tapes for years.

[Sidebar: JKL]
Once upon a time when computer editing was emerging as a useful business tool, Avid dominated professional video editing (and it still does at the high end). Avid systems mapped keyboard shortcut commands into a group that is now common to most editing software.

Virtual tape transport functions fall on the JKL keys. “J” is back, “K” is stop and “L” is forward. Multiple presses of the “J” and “L” keys increase the speed of the virtual tape shuttle. The “I” and “O” keys became the set (mark) In and set (mark) Out keys. As luck would have it, “I” and “O” sit right above “JKL.”

Even though some early editing software tried to use other key combinations, JKL is now the standard in nearly every software video editing system sold. And that means learning to use the simple JKL keyboard convention for logging tapes should be your first step in mastering efficient tape logging.