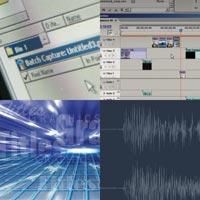 In the previous two installments in this series, we covered preparing for the edit and building the timeline. This month, we’ll look at the next step in the post-production process: spicing up your video with titles and graphics. Before videographers were empowered with the excellent titling functions built into most of today’s editing software, creating good-looking titles was difficult.

Broadcast quality titlers were expensive and hard to operate. Less expensive stand-alone titlers often had severe stylistic limitations. Today, video titling is much, much easier. Any quality software is likely to have built-in graphics and titling capabilities that would have been the envy of even a network TV station only a decade ago.

You may be tempted to think of your software’s titling program as nothing more than a glorified word processor. Don’t. The techniques necessary for putting words on a TV screen have only the most basic principals in common with the design and layout of printed documents. The video editor’s goal is to get legible text to display on the comparatively rough resolution of a video raster, which is, in many ways, much harder than print on paper. It’s a whole ‘nother ballgame.

The term "raster" is just tech-speak for the pattern of dots, organized into lines that make up a visual display of information on a computer or TV screen. Your computer typically uses a display with a progressive scan raster. In this kind of system, the display image is written as a series of lines that are generated left to right, top to bottom one line after another until the picture is complete.

When the TV standards were set back in the 1950s, they specified that our televisions would work on an interlaced scan system. Thirty frames of video are generated each second, divided into two interlaced fields. Each field consists of every other line of information.

In practical terms, the effective resolution of most household color TV sets typically hovers around 260 lines. So what does this all mean to someone wanting to do something simple and practical like putting a title on the video screen?

Trying to put small stuff with fine details, like text, on a TV screen can be an exercise in frustration. There simply isn’t enough effective screen resolution to work with the size of type that works just fine on paper. So the first rule for video title creation is this: big and bold usually works better than small and delicate.

Video type designers have another challenge: movement. Unlike the print designer who has an even background once the paper type and color are selected, the video designer sometimes faces the need to layer text over moving video. This process means the type designer must work with a background that changes from moment to moment.

Imagine that you’ve decided to do a title over a shot of a street scene. The wall of the building opposite is dark, so you’ve selected a light type color. Things look great as you’re building your type. Then you watch your program and, much to your surprise, after just a couple of seconds, a white truck pulls up in the frame. The light colored type that you specified to match the dark building suddenly disappears.

The experienced video type designer will understand that it’s usually better to build titles in a way that they can withstand the challenge of this kind of changing background. Try adding a drop shadow to your text, preferably in a sharply contrasting color and brightness. This can help keep a title readable even when the background shifts or when the title overlaps two areas with different colors. Or you can set a background mask behind the type that dims or completely blocks the background in just the area where the type occupies the screen. Or you could throw a geometric colored shape behind the title. This doesn’t have to be an emergency fix for a problem, either, but these ideas can and should be an intimate part of the creative design and layout of a good title.

Here’s an example of what we are talking about. In our scene, Grandma and Grandpa are disco dancing at a family celebration. Let’s use our type generator to spice up the scene with a few humorous captions.

First, we’ll generate a title screen proclaiming Grandma and Grandpa "Saturday Night Fever — Grand Champions!" The joke resolves itself in the next scene where we dissolve in the additional line "Wishful Thinking Division" over the gyrations of the on-screen couple.

This breaking of the invisible wall between the program and the audience isn’t always appropriate, but with the family video we’re discussing here, it’ll be fine. Here there’s no reason the videographer can’t comment on the proceedings and share inside jokes with the audience, even if they’re cheesy. And it’s a good example of how adding type and graphics to your program gives you another way to communicate with your audience.

Not all colors in the spectrum are colors that will play out well on your TV. Wild colors can look cool on a computer, but a psychedelic green on your PC might end up looking seasick green when shown on a regular television.

You also need to be aware of the safe title areas on the screen. Most editing systems have a safe screen view for fonts. It’s within the center 60-80 percent of the screen, and it keeps that overly large title "Jenny’s Birthday" from playing out as "enny’s Birthd".

Of course titling and graphics are also at home in everything from business to wedding videos. Anyone who has ever watched a movie understands the function of an opening title sequence. In the movies, it not only displays the title of the program, but it often carries a lot of information ranging from the production company logo, to names of the stars, director and other key players. Opening titles are the first impression we get of a movie and they strongly set the tone for what is to come. And titles wind down the end of the picture as well.

Titling and graphics in your videos can do the same thing, helping orient potential viewers to what they’re going to see and making sure that the people doing the hard work to create the program get the credit they deserve. If you are not the most accomplished design professional, our realistic advice is to keep it simple. Use your titles to communicate as clearly as possible and try not to make them distracting. While it’s natural to concentrate on your video and audio to carry story content to your audience, don’t overlook the advantages of something as simple as on-screen type. So, no matter what type of program you’re working on, spending some quality time working out your program graphics and titles can be worth it.

Next Month: Editing part 4: How to finesse your final project and sweeten your audio and effects.

Sidebar: The Power of Type

The best titles give you an introduction to the tone and spirit of the film. Sit down in a theater full of rabid "Star Wars" film fans and don’t be surprised if they start cheering the moment they see the hallmark tilted back yellow type against a star field opening.

It’s clear that director George Lucas doesn’t have any type design limitations and could have fancier titles if he wanted them. In his latest films, his modern supercomputer technology imitates what was original done with painted words on a pane of glass.

It’s the same brand identification power carried by a well known corporate logo or trademark ID. So, while you may never be lucky enough to have your works become such a pervasive brand, there’s no reason you can’t give the same careful thought to designing your titles and graphics.

As you explore your software’s titling and graphics creation menus, you’ll come upon some terms that might not be familiar to you. Here are some common graphics and titling terms and their definitions.

Editing: Editing from Start to Finish, Part 4 of 4