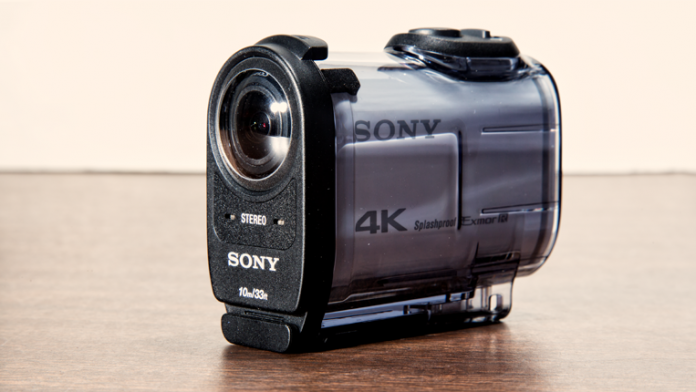 Action Cams are everywhere these days, mounted to athletes, aerial drones and even pets. GoPro has been the leader of the pack since the beginning, with other camera makers playing catch-up. Sony’s newest 4K action cam, the FDR-X1000V, is a direct competitor to the GoPro Hero 4 Black edition. While the Sony 4k Action Cam isn't quite a GoPro killer, it offers a unique set of features that deserve an in-depth look.

We were very impressed by the Action Cam’s form and style. It’s long and thin, unlike GoPro's boxy design. It’s small and easy to grip in one hand and has a flat base so it can stand on its own. The Live View Remote bundle reviewed here only includes one adhesive VCT-AM1 mount and one tripod adapter, but fortunately, a universal tripod screw mount on the base allows you to attach the camera to a wide variety of third-party mounts.

The camera accepts either a microSD card or a Memory Stick Micro (M2) media. You’ll need a microSDXC card with a UHS-I U3 rating in order to record at higher bitrates. We found it easy to put a microSD card in the wrong way, so be sure to read the instructions to avoid a mysterious MEDIA error on the camera LCD.

The camera comes with one Sony NP-BX1 battery that lasts about 45 minutes when recording 4K video with Wi-Fi enabled. When recording 1080p video without Wi-Fi on, the battery will last at least twice as long. The battery is charged in the camera using the included USB cable, but aftermarket chargers are also available and more convenient.

The Action Cam is splash-resistant with an IPX4 rating and comes with a waterproof housing that keeps the camera dry in depths of up to 10 meters. We tested the case in a swimming pool and found that while waterproof, it made the X1000V’s on-camera controls more difficult to use.

The camera controls require multiple button presses but are easy to navigate with a little practice. Two buttons on the side of the camera, Prev and Next, are used to navigate through menu options on the small LCD screen. Pushing both together turns Wi-Fi on and off. On top of the camera, the record button is used to confirm menu selections as well as to start/stop recording. A hold switch prevents the camera from accidentally turning on in your pocket.

The LiveView Remote is designed to be worn on your wrist, giving you easy access to recording control and menu options. Most important, the small color screen provides a live view of the action, something you can’t get from the camera’s small display panel.

For an even better view and more controls, Sony’s PlayMemories Mobile app from iTunes or Google Play is free for your phone or tablet. We tested the app on a Samsung Galaxy Tab 4 and had no issues with pairing or controlling the 4K Action Cam. Up to five Action Cams can be controlled by one mobile device. You also have access to more advanced manual control of settings, such as white balance and AE shifting. Adjust the hue levels and brightness to get the look you want or match the look of other cameras.

The PlayMemories Mobile app not only allows you to use your mobile device as a remote control and viewfinder, it also provides the only practical way to transfer footage from the Action Cam to your computer. Another feature, called Highlight Movie Maker, can automatically edit footage from your Action Cam into a video montage.

The small but powerful X1000V offers a wide variety of shooting modes to capture the action. Movie Mode gives you a range of video options, everything from high resolution 4K to 240P super slow motion in lower resolutions.

One feature that sets the Sony 4K Action Cam apart from the GoPro HERO is SteadyShot image stabilization.

The X1000V is also handy for shooting stills in Photo Mode. The maximum resolution of 8.8MP isn’t huge, but the images are better than what you’ll get from most smartphones. Use Burst shooting to shoot a continuous interval set in the still image shooting interval [FPS] setting, or Motion Shot LE to capture traces of a moving subject in one image so that it appears to be a continuous picture.

Interval Photo mode lets you take a series of photos that you can later edit into a time-lapse video. You can configure the angle of view of the camera for shooting still images to either 170° or 120° field angle. This setting is available only when in the Photo Mode or the Interval Photo recording mode. Choose from five, 10, 30, or 60 second intervals.
Loop Recording mode is very useful if you’re worried about running out of memory during long adventures. Set the recording loop duration from five/20/60/120 minutes or unlimited to catch those moments without losing previously recorded content on the card.

Live Stream mode lets the Sony 4K Action Cam’s Wi-Fi deliver movies in real time via the video sharing website Ustream by using a Wi-Fi router or smartphone that can tether the camera. This requires a Ustream account and a bit of setup for both your Action Cam and the Wi-Fi network you’ll be using to route the video.

Sony’s 4K Action Cam has an ultra-wide angle Zeiss Tessar lens that shoots up to a 170° viewing angle — 120° when SteadyShot is turned on. The aperture of f/2.8 picks up low light images pretty well for an action camera, but it can lose some detail in very light areas of bright images.

These images are captured by a 1/2.3-inch back-illuminated Exmor R CMOS sensor. The X1000V has what Sony describes as full pixel readout without pixel binning. This means one pixel on the sensor directly corresponds to a pixel in the video, which improves image quality by reducing false coloring and jagged edges.

One feature that sets the Sony 4K Action Cam apart from the GoPro HERO is SteadyShot image stabilization. The stabilization is digital not optical, so it’s not available in 4K recording because the images must be cropped to compensate for camera shake. If you shoot mostly in HD anyway, it’s a handy feature for smoothing out those small bumps and rattles that can ruin a shot. You can even set SteadyShot to compensate for the specific vibration frequencies of aerial drones.

We tested the Sony 4K Action Cam in a variety of activities: hiking, biking, swimming, driving — even a karate class for children. The camera performed without errors or glitches, although the outside did become noticeably warm after only a few minutes of shooting 4K video.

We attached the 4K Action Cam to the front of a bicycle for a ride that lasted several hours. Long battery life allowed us to record the entire trip in 1080/30p video on a 64GB microSDXC memory card with only one battery change. Exposure adjusted quickly as we moved from shade to bright areas. A LiveView Remote on the wrist gave us recording control and the ability to change settings without having to remove the camera from the bike.

Poor audio is what you’d expect from a small built-in stereo mic, but a wind noise reduction filter option helps. Image quality is sharp with crisp colors when shooting in the default Vivid color mode. The alternate Neutral color mode, is comparable to GoPro’s Protune color profile. This allows more fine-tuning in post but can blow out highlights in high contrast shots.

We later tested the Action Cam’s underwater case in a swimming pool about six feet deep. Putting the camera into the case was more difficult than expected. It took a few tries to get the Record button to activate inside the case, but it worked fine once everything was properly aligned.

Another issue with the waterproof case is that droplets have a tendency to cling to the curved front, obscuring the image after you emerge from the water. Sony offers an optional dive door with a flat front panel for the underwater case that is supposed to reduce water droplets and increase the case’s depth tolerance to 60m/197ft.

Sony’s 4K Action Cam isn’t a GoPro killer, but the power to record 4K video at 30p makes it a worthy competitor. Amateur action enthusiasts and video professionals alike will enjoy the variety of features and shooting options. Because it’s water resistant even without a case, you can slip it into your pocket for a day out hiking and not worry about a bit of rain ruining your $500 camera.

Add a LiveView Remote or a Wi-Fi connected mobile device for greater control, and the X1000V can even be used as a 4K production camera for documentaries or indie features. With the FDR-X1000V, Sony has once again brought a superb camera to a highly competitive market.

Joshua A. Siegel is an award-winning filmmaker and graphic artist based in Northern California.