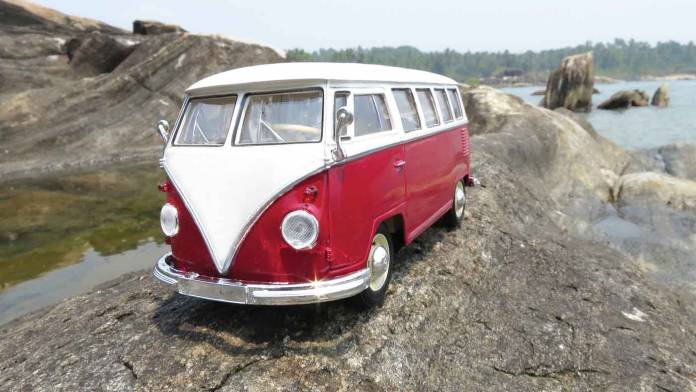 Want rockets and castles and giant monsters in your video but don’t have the money to buy actual castles and monsters? Join the club!

Forced perspective is an easy-to-use optical illusion that makes objects look larger or smaller based on their position in the frame relative to other objects.

It’s an extremely common technique for news gatherers sent out to get video of small people who own big dogs, giant spiders found in people’s houses and other things where the videographer wants to exaggerate a discrepancy in size. Often the camera person gets to the home of the person with the most amazingly huge dog to find a pretty big dog, but not really one of film-at-eleven size so they’ll use a little forced perspective to exaggerate things.

In this article we’ll discuss what’s needed to make forced perspective work and talk about famous examples. You can also take a look at seven old school special effects in this Videomaker article.

Having difficulty finding a castle to use as Camelot in their 1977 production, Monty Python built a ten foot tall model on a small hill and used forced perspective to make you think it was much larger and much further away.

Forced perspective is an in-camera effect

Forced perspective is something that just happens when you place objects in a certain way in the frame with a particular lens. It doesn’t require any special technology or post-production.

What do you need to make forced perspective work?

In the 1950s, American cinema became fascinated with radiation after the atomic bombs were dropped in Japan and the first nuclear powered submarine took to the oceans in 1954. “What if,” filmmakers asked, over and over, “radiation made some animal bigger and suddenly humans were food?” The “some animal” ranged from lizards to spiders to ants to octopi. Many of these movies used effects like stop motion animation in conjunction with rear-screen projection to put large monsters and tiny people on the screen together. Others used ordinary sized creatures made to look larger through camera placement.

Even though forced perspective is a simple technique, it’s still used as a money saver today. Working on a horror movie? Videomaker has some ideas about how to do that here.

When Steven Spielberg wanted to put an enormous ship in the middle of the desert for his (1977) film, “Close Encounters of the Third Kind” he was faced with several possibilities —  he could get a full sized ship and drag it out into the desert, or he could try to create it with a computer, or he could make a 20 foot long model of it and use in-camera forced perspective to make actors a quarter of a mile away look like they were standing nearby a much larger ship. This is what, in fact, he chose to do.

Likewise, in 2001 when Peter Jackson tackled the difficult task of having small hobbits and dwarves with significantly taller characters in the first installment of the Lord of the Rings franchise, he didn’t want to limit himself to hiring actors based on their height rather than their ability to portray the characters. He utilized some very sophisticated forced perspective to have actors of similar heights appear at much different sizes on screen.

John Rhyse-Davies, who played Gimli the dwarf, is six foot one, which makes him actually the tallest of all the actors playing major roles in the movies. He appears much smaller in the films through clever use of forced perspective. Jackson also used smaller actors as body doubles in long shots where the actors faces couldn’t be seen.

Let’s try it out!

There’s no better way to understand how forced perspective works than through the lens.

Recruit two friends of similar heights, or, barring that, a tabletop and two similarly sized objects. Get yourself to a brightly lit area with a wide angle lens and stop down as much as you can. F8 or f16 are good places to start out. Still a little baffled about f-stops? No worries, it can be confusing. Check out this Videomaker video explaining how it works and what it does. Now have your two volunteers stand side by side in the center of the frame in a ¾ shot, about from the waist up. Then have one subject take a step back. Experiment with moving the two and then try adding things in extreme closeups. Let’s say that you want to make a video where your next door neighbor is attacked by a 10-inch action figure of your favorite horror movie monster — Pumpkinhead. You actually wouldn’t be able to because Pumpkinhead is a copyrighted character created by Stan Winston, but that’s beside the point. Move your action figure up close to the lens in the permanently awesome menacing pose that an action figure always has and then move your neighbor back in the frame until he’s the proper size. Then, start rolling and yell “action!”

If you try different focal lengths you will see how this becomes less and less effective with longer lenses. At the telephoto end of the scale, the lens will actually compress distances between objects — a person a hundred yards from the camera and half a mile in front of the statue of liberty will appear closer to the statute of liberty than the do to the naked eye.

Your homework assignment (should you choose to accept it)

Collect some willing neighbors or family members or dogs and a variety of objects such as toy cars, bananas, dolls, doll houses and, out in the backyard or at a park, experiment with placing people and objects in the frame so that it appears people are interacting with inexplicably large objects. Also experiment with making one person larger than another — a huge toddler on a tricycle who towers above her mother? Your neighbor encounters an apple the size of a house?

If you get some good results, show us in the Videomaker forums.

Kyle Cassidy is an award-winning visual artist who lives in Philadelphia. Living next door to him means that, at one point or another, you will be menaced by an action figure for a Videomaker article.