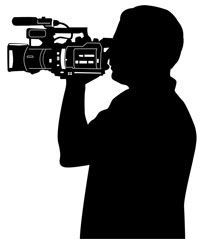 It all started the first time I saw a video camera-my sister’s 5th birthday; the folks who organized the party told us they’d bring one along, and we got to see ourselves on a TV screen. For years I was fascinated with television, wondering how it worked, how we saw the images, etc. In high school, I took a media class, where we worked on several projects, including a parody of The Brady Bunch, one of my all-time favorite shows. We used older equipment (not older than 2-3 years) to produce this project and I was pleasantly surprised at how well it turned out.

In college, I pursued an Associate’s Degree in Liberal Arts; they offered three media classes: Radio, Television and Film. I considered the film class, but wanted to concentrate on the other two, and I really enjoyed the classes. We produced several projects, including taping informative speeches on subjects like sketching, favorite albums, and music groups. Some of us became a temporary tech crew, becoming more actively involved in the creative process-with a newscast and open forum program, we delved into producing more professional-looking programming. Here I began to get a better idea of what was involved in television production. With radio, the same thing, but television seemed more appealing-more opportunities to be creative.

I had applied to several TV stations in hopes of working in the broadcast TV environment; no prospects, but did hear about a broadcasting school that had concentrated classes in radio, TV and video production. For eight months, we learned the ins and outs of these plus news/commercial copywriting and newscasting. It was very intense and fun to learn. After graduating, I interned at two cable stations, assisting with some in-studio and on-location productions, learning more about editing and producing small projects.

After going back to college, I began volunteering for a local cable station, having fun working with a regular crew on local productions, learning even more about production and editing. In October of 1994, I worked for two video producers, taping a pre-teen beauty pageant at a local theater and two football games in southeast Michigan, learning more about professional video production and working with professional equipment-lugging a Sony DXC-3000 with a cable attached was a bit much…the dream job finally came in 1999, running a studio camera for a local station newscast – short lived and fast-paced, but fun.

In November of 1994, my dad had read about a Nashville-based company that produces high school video yearbooks; this was the perfect opportunity for my sister and I, as she wanted to get into business marketing, I into video production. After visiting the facilities and much paperwork, we got our franchise and formed our company. We spent many hours in the schools as well as the local hockey arena, filming our local team. We only taped the video yearbook for one school year, as it hadn’t had the impact we had hoped-all 3 schools have great sports programs, a natural for selling many tapes. After a hectic season, I decided to continue on producing, filming and editing for local and out-of-town clients, learning more about running a video production company as I went along. I hired two friends to help out, both of whom have been very instrumental in the company.

Now with 14 years in business and having done work for many clients, concentrating on wedding/event video, sporting events and dance recitals…it’s great to help folks preserve precious memories and become even more involved in the creative process-the two things that bring great satisfaction and keep us going.