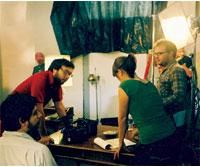 Sandymontana: A newbie company in the land of giants.

Meet Sandymontana, a youthful media production company with lots of hearth… ahem… heart. This Portland, Oregon-based group is getting cozy with their newest addition: a vintage fireplace complete with fake logs and a classic orange glow. Maybe that’s the key to making videos for Nike, VH1, and The Foo Fighters? That could well be the case, seeing as how Sandymontana set up their video production shop not more than two years ago.

Sandymontana, or The Sandies as they call themselves, is made up of five creative individuals: Producer Colin McDougall Brown, Producer/ Director Uli Beutter (pronounced, Oo-lee Boy-ter), Director Alec Cohen, Director Kurt Nishimura, and Director/Editor Adam Long. The team has come together really well it seems. “We all have the same goals”, says Uli, “And we really love collaboration”. In fact, Adam Long is a recent addition to the Sandymontana crew, bringing with him a background in directing and motion graphics. “We’re growing fast…in a time when not much else is!”, states Sandy Producer Colin Brown.

Only last year did Sandymontana win a video contest for Tropicana’s Fresh Take Film Festival. Their wet video entry shows a businessman as he repeatedly gets splashed in the face as he walks down a busy street. At the end, a charming youth offers up some juice which magically dries the man off. Since the Tropicana festival, the team has created more gems for a variety of companies and outlets. Music videos for The Decemberists, curious video installations, and an environmental campaign are all in the can. And, the hits keep coming. Sandymontana’s strength lies in it’s ability to do more than simply direct, shoot and edit. “We can go from concept to final cut”, adds Alec. Their multi-disciplinary mindset allows them to create a broad range of videos: commercials, music videos, web content, and even live mix content.

What is live mix content, you ask? Exhibit A: music legends The Foo Fighters. Their recent concerts at Wembley Stadium included a 100-foot video wall that displayed Sandymontana’s handywork. Video was mixed together on screens behind the band performance. “At that size, you kind of lose resolution”, adds Colin. “But we didn’t encounter a problem”. If you missed the concert, the British Broadcasting Company has bailed you out; they shot the concert and will be releasing a DVD very soon.

As Sandymontana continues to progress into areas outside video, including 3D animation, they also keep a concept-driven approach and are willing to do “Whatever feeds the edge-cuttingness”, says Uli.

Andrew Burke is an independent producer and has worked in all areas of video production on three continents.

Watch our video interview on the innovative company Sandymontana.