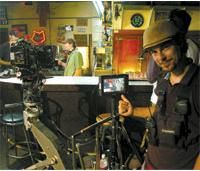 It’s a narrow, plain-looking two-story house of blackened brick in the old part of Centretown. In the first-floor apartment, just off the shoulder-width hallway, Christion Schnobb sits hunched over the computer in his densely-organized clutter of an office. Topped by a perforated Ivy cap, his goateed face is concentrating. His fingers are flying across the keyboard. He looks more like an absorbed jazz pianist than someone who builds dolly tracks on movie sets and who can’t stop creating his own screen stories.

The 32-year-old screen production worker credits the 1995 sci-fi thriller Outbreak for first stirring the desire to bring his own scripts to the screen. It all began with the scene in which someone releases a deadly virus through an air vent into a movie theatre. Soon people started coughing, first in the movie and then, one by one, in the very theatre where Schnobb was watching.

“That really impressed upon me a film’s power of suggestion,” he recalls.

Already an avid short story writer, he now wanted to bring his stories to life. He enrolled in a college scriptwriting program, where he was severely bitten by the screenwriting bug. After graduating, he began work on several spec scripts. To pay the rent, he took a job at a movie equipment company, where he chatted up industry people, asking if they needed crew. His break came with a job as a dolly grip for a comedy sketch TV show. In the show’s second season, he submitted a spec script.

“Although the script wasn’t bought, it did get me more work with this production company later on, because they saw what I was able to do.”

A self-proclaimed “apostle of hustle” on set, Schnobb is delighted the phone hasn’t stopped ringing. The grip work is financing his writing projects, as well as his speculative forays into the world of independent production.

“Working on set, you get to know what’s out there, what gets produced, and you can sort of orient your own work in that direction,” says Schnobb. “You learn how to keep the number of locations down, and you learn tricks that help to cut costs.”

He describes one of his favorites, creating the illusion of a police car in a scene. “Prohibitive to rent, the police car doesn’t have to be seen in the shot, but it can be implied by mounting a couple of 2Ks at the ends of a crossbar on a C-stand and spinning them around and around.”

Cost-cutting topped the agenda when Schnobb and a friend wrote and co-produced On Guard. He shot his first professional (but very low-budget) comedy short about two bickering security guards on one location. It was possible because Schnobb’s cast and crew worked for little or nothing. Schnobb speaks highly of the give-and-take relationship among fledgling filmmakers in the local production community.

“Working in the industry, chances are you know a lot of people who will help you out. They may have something down the line that they want you to help them with. So it’s good to help everyone with whatever they’re working on, so they can help you too.”

Schnobb and co-producer Aurèle Gaudet sold On Guard to a broadcaster and have just completed the sequel. They’ve also written a show bible and are now trying to sell the misadventures of the hapless security guards as a television series. But Schnobb says writer/producers who want to make a living as filmmakers shouldn’t put all their eggs into one production basket.

“You’ve got to spread yourself out and have a lot of things on the burner. Essentially you’ve got to be a busy chef,” he cautions.

According to the dry-erase board perched above his stacks of film books and dusty 8mm camera collection, Schnobb is working on at least five projects, from corporate video scripts to a heavy-metal cooking show which he hopes to sell to MTV.

The only advice he has for those who want to go into do-it-yourself filmmaking is, “If this is your passion, and you want to do this for the rest of your life, just keep doing it.”

Watch the Videomaker interview with Schnobb.