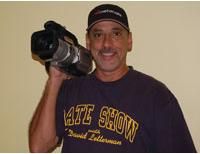 Our readers have expressed interest in learning about other producers – their trials and tributes and how those made their businesses work for them. This is the first of several Producer Profiles that Videomaker will bring you throughout 2008. Each profile will highlight a different type of producer. Kip Kay is a web producer and does a pretty good job at it. In the future, you’ll read about documentary producers, one-man-band producers and more.

A high-tech electronic spy stethoscope made from $25 in spare parts. A futuristic-looking gun that shoots vivid violet-blue laser beams, made from an old toy retrofitted with the laser assembly of a Playstation 3. A way to boost the power of your remote control with electrical tape and tinfoil. Those are the sorts of things you can learn to build at www.kipkay.com, home to Kip Kay and his wildly successful internet videos. Using the Metacafe Producer Rewards program, Kay has made over $76,000 with his short instructional films.

Though he has no formal scientific background outside of standard college science classes, Kay’s interest in gadgets is lifelong. “I’ve always enjoyed tinkering with things,” he says, “and I learned a lot from my father, who taught me about mechanics and electronics. I’m just resourceful, I guess.” His video production career started in high school, with some vocational TV production and broadcasting classes that eventually led to a job in radio. Additionally, Kay worked as a computer technician and part-time media director for his local church, a position which he still holds.

“I did my time in radio,” he explains. “Then I started my own video production business. I produced cable TV ads and infomercials.” It was a natural transition to go from video for television to video for the internet.

“A friend told me about Revver.com and how much one of the people there was making. I tried my hand at uploading a couple of videos but was not very successful. To date I’ve made a whopping $7.27.” Then, in 2006, he found Metacafe.com. “I noticed they were getting ready to launch their Producer Rewards program, so I began submitting videos.” Just over a year and almost 90 videos later, Kay is now a five-figure poster boy for viral video stardom.

His tips for anyone looking to attempt to replicate his success are simple: “The most important thing for anyone starting out is to look and see where your market is. A lot of video websites have completely different demographics. You need to target your audience in order to be successful.” He stresses staying current. “Look at the top videos. See what it is that people like. Believe me, that trend is always changing. Look at the trends, and know your audience.”

But how to get started? The internet can be an intimidating market to crack. “Just go for it,” Kay says. “You don’t know if you’re going to be successful at it until you put a video up there.” If you fail, learn from your mistakes. “If a video doesn’t do well, it’s usually the content. Sometimes people will overlook production quality if the content is something appealing and attractive and enjoyable, but the content needs to be right. Keep uploading, and keep submitting until you hit the one that people like.” Of course, the entry barrier is low. “It usually doesn’t cost a whole lot, if anything, to put a video together and put it on your website.”

Mike VanHelder is an IT professional with a sideline in film production.

Find Metacafe producer Kip Kay on the web at www.kipkay.com. You can see the webcam interview with Kip here.